The audience sat in absolute silence. Gold light haloed the Wordless Music Orchestra and Choir. A giant ethereal harp shone through the darkness. Musicians straddled cellos, bowed violins, and fingered pianos, as an army of vocalists beautifully harmonized. Composer Robert Ames faced the orchestra and arched his back as his flexed arms gracefully danced to the opus. 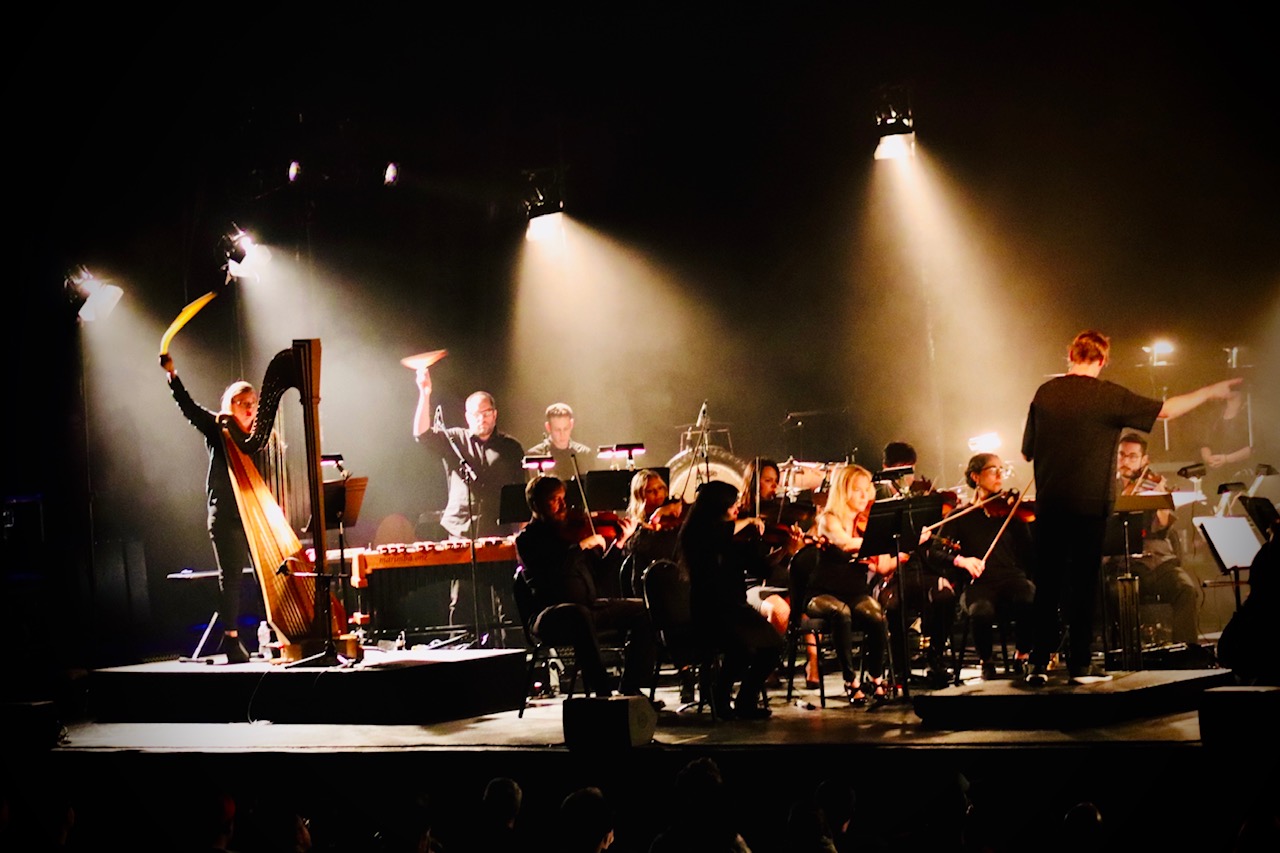 Just before playing “All Animals,” Jónsi Birgisson (Sigur Rós) and film composer Alex Somers greeted the crowd at the Golden Gate Theatre. Somers asked everyone to find the Pop Rocks left on their chairs and instructed the crowd to wait for their cue before opening and sharing with their neighbors. Nearing the end of Chapter III, Ames faced the audience and swooped his arms forward. People quickly ripped open the tiny bags and poured the sugary popping crystals onto their tongues. The specs tingled and crackled, sharpening the experience unfolding before them. 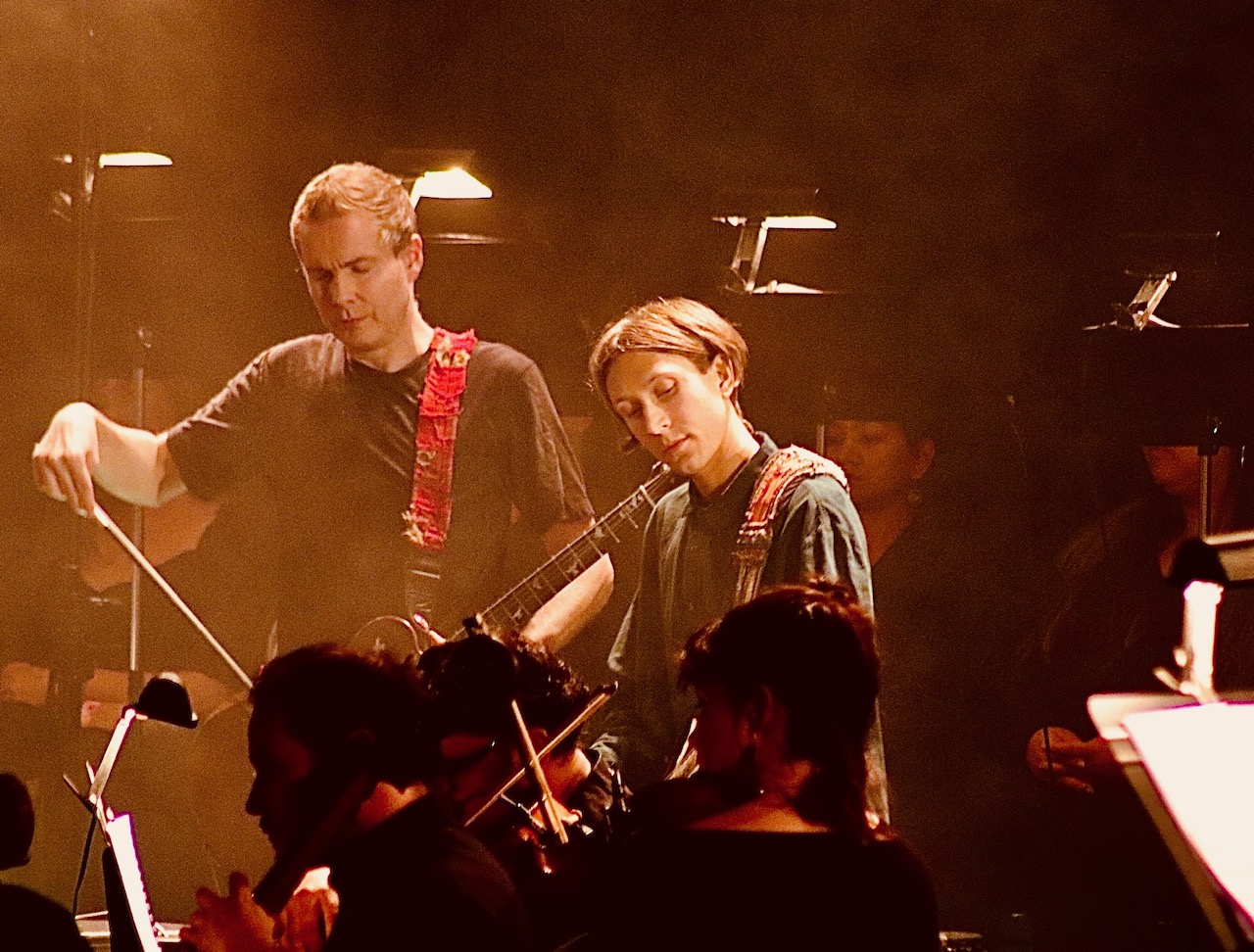 The opening act felt intimate. By the time Jónsi and Somers joined on stage, the already atmospheric sounds intensified. The pair is celebrating the tenth anniversary of their collaborative 2009 album, Riceboy Sleeps. It’s also the first time they’ve played the record in its entirety. The duo also just released a surprise second LP, Lost & Found, which is said to be Riceboy Sleeps’ sibling album. 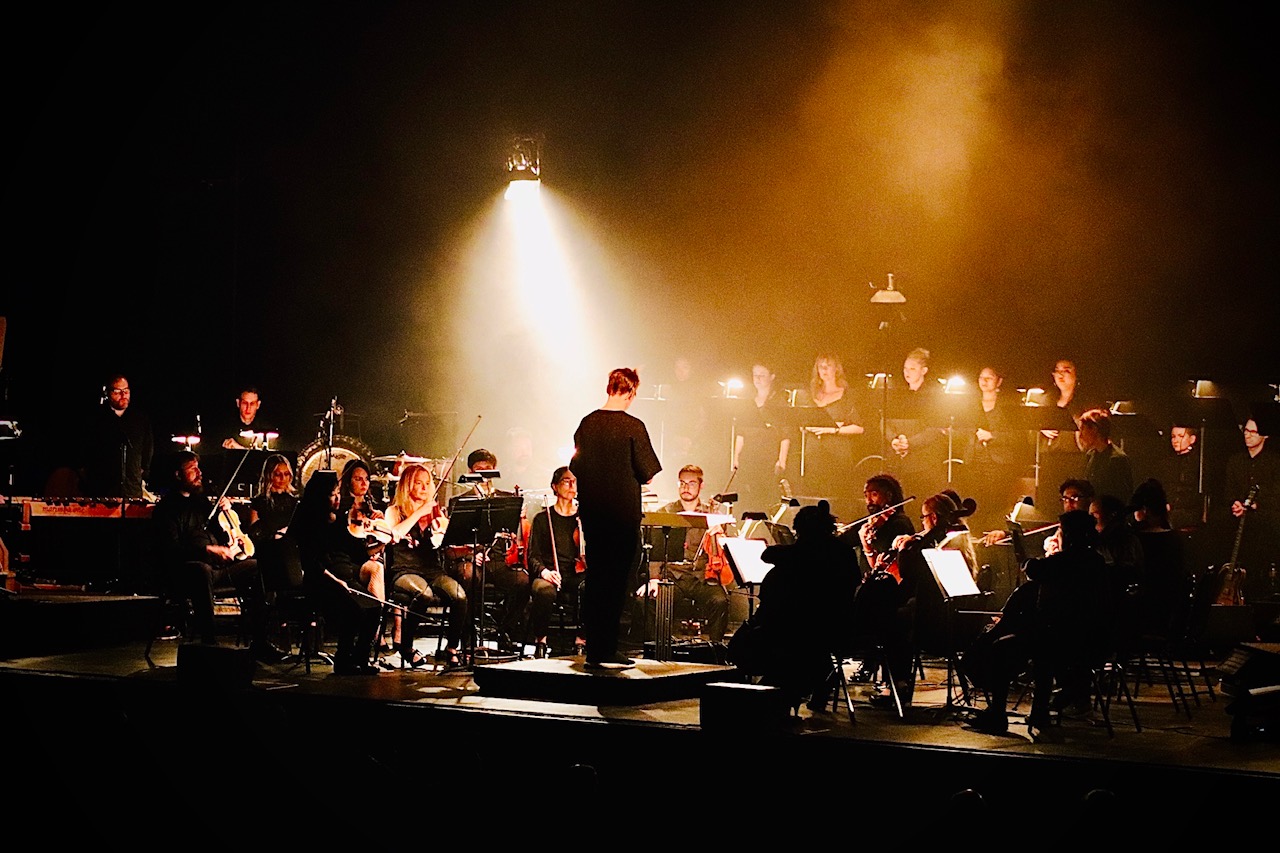 The musical union of Jónsi and Somers is something quite spectacular. Both musical and life partners, the pair originally sought the direction of composer David Handler, who made wild changes to the arrangements. He added extra musical sounds like bags of glass, bird callers, and whirly tubes, translating the music to what it is today. 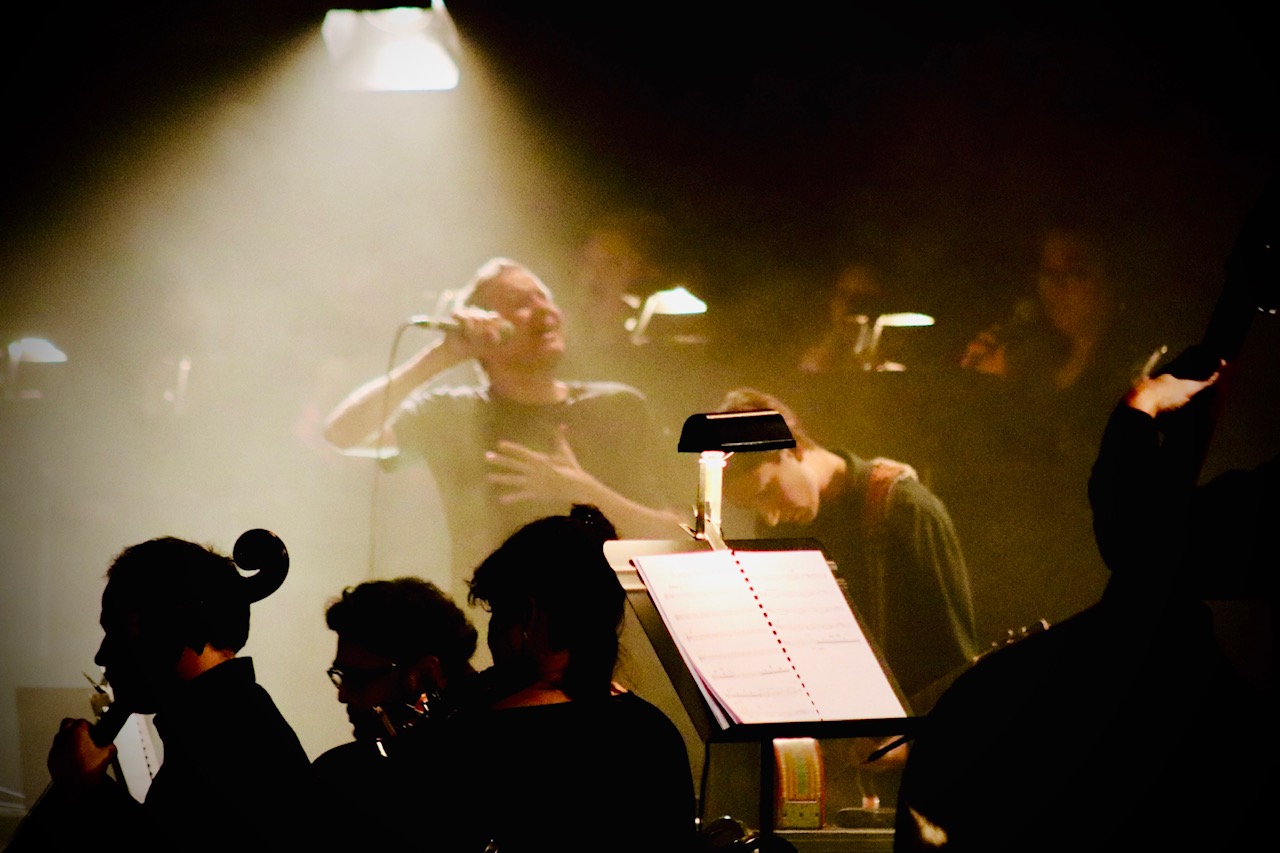 Since then, Ames has taken the lead. He listened to Riceboy Sleeps as a young man and admits the record was a big part of his musical evolution. Opening with “Happiness” the ambient sounds fused and moved together. The choir hummed, other times their powerful voices penetrated your soul. The sweet, unnerving chaos was gorgeous. 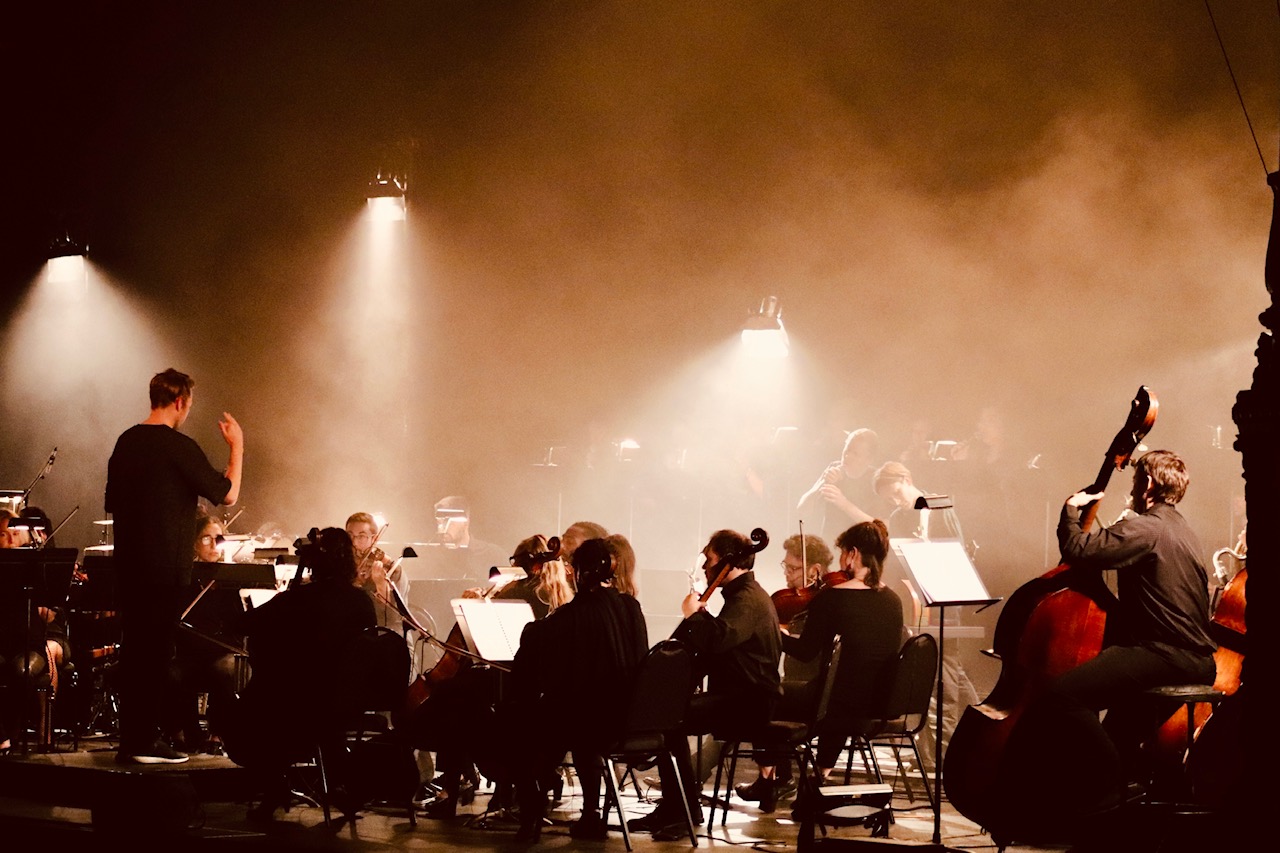 Jónsi and Somers stood in front of Ames and far away from the crowd’s view. You could still see Jónsi’s tall, slender frame hunch and bend as he vigorously bowed his guitar. Somers played a variety of instruments, though most of the time he plucked a guitar and leaned forward as Jónsi clenched his fist against his chest and did what he does best. His falsetto is jaw-dropping. It’s the noise made of dreams, and the reason his fans remained seated, shaken, and silent. 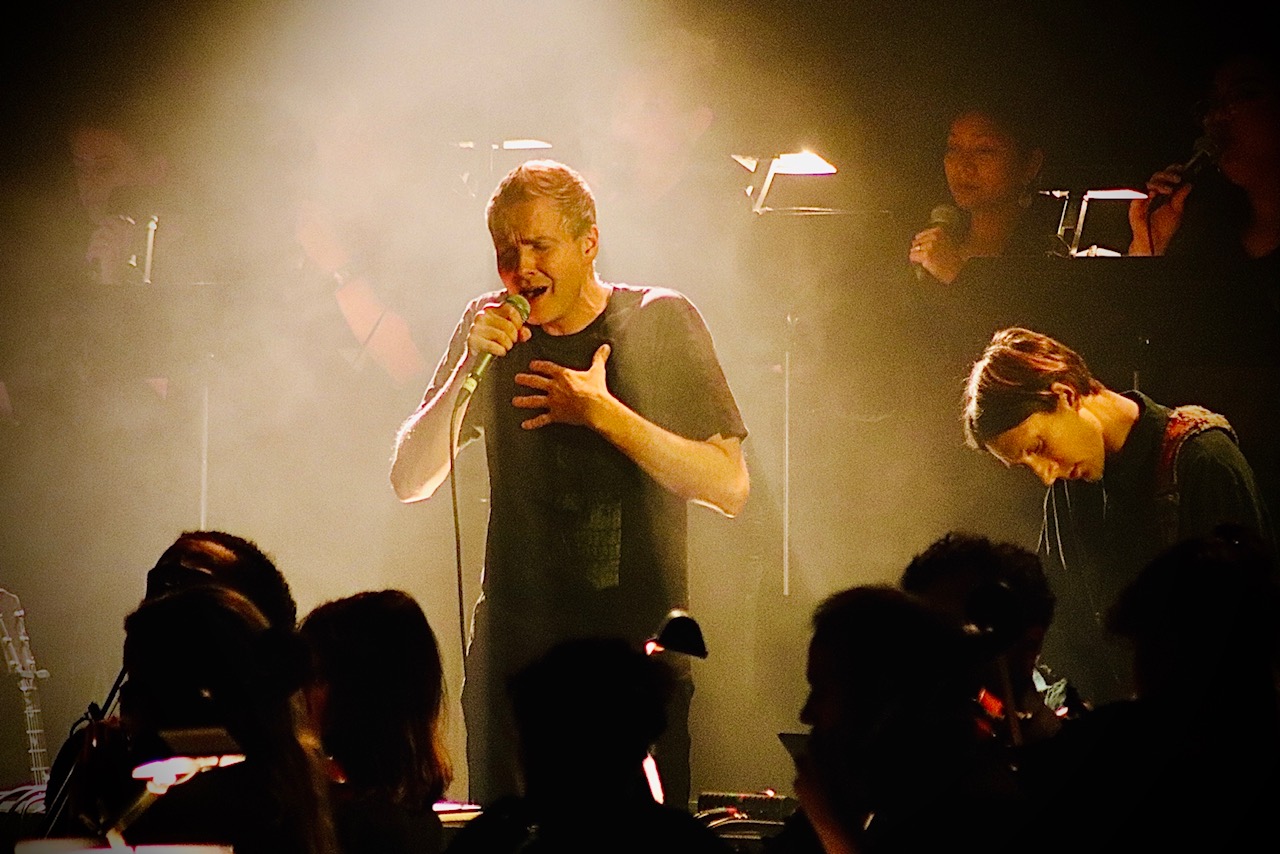 They played each song in the album’s order. Next, “Atlas Song,” then “Indian Summer,” and “Stokkseyri.” The room remained still and dark, but the light morphed from gold to blue to green. Some sounds felt like sonar—if you closed your eyes you could envision a gargantuan whale gliding through deep water, singing in a language you somehow understood. 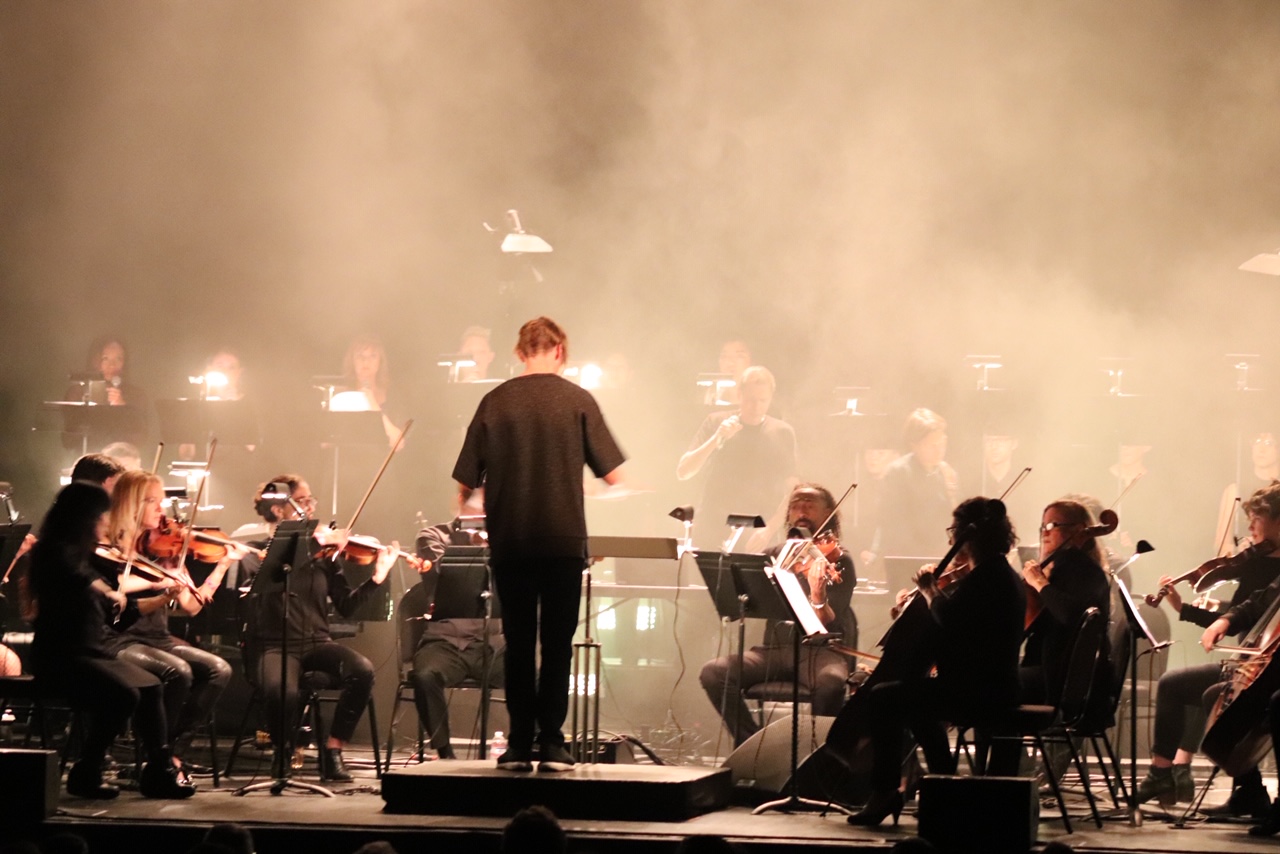 The entire set was freeing. It was ambient and textural. Mid-set, they played sleepier hit, “Boy 1904,” then “All the Big Trees,” “Daníell in the Sea,” and “Howl.” Surrounded by instrumentalists of all kinds, they played as if they’d toured together for years. But Jónsi and Somers don’t consider themselves a band. What started out as a fun experimental project, eventually evolved into a structureless musical space. When writing the album, they didn’t have any expectations. They certainly never dreamt of playing it live. 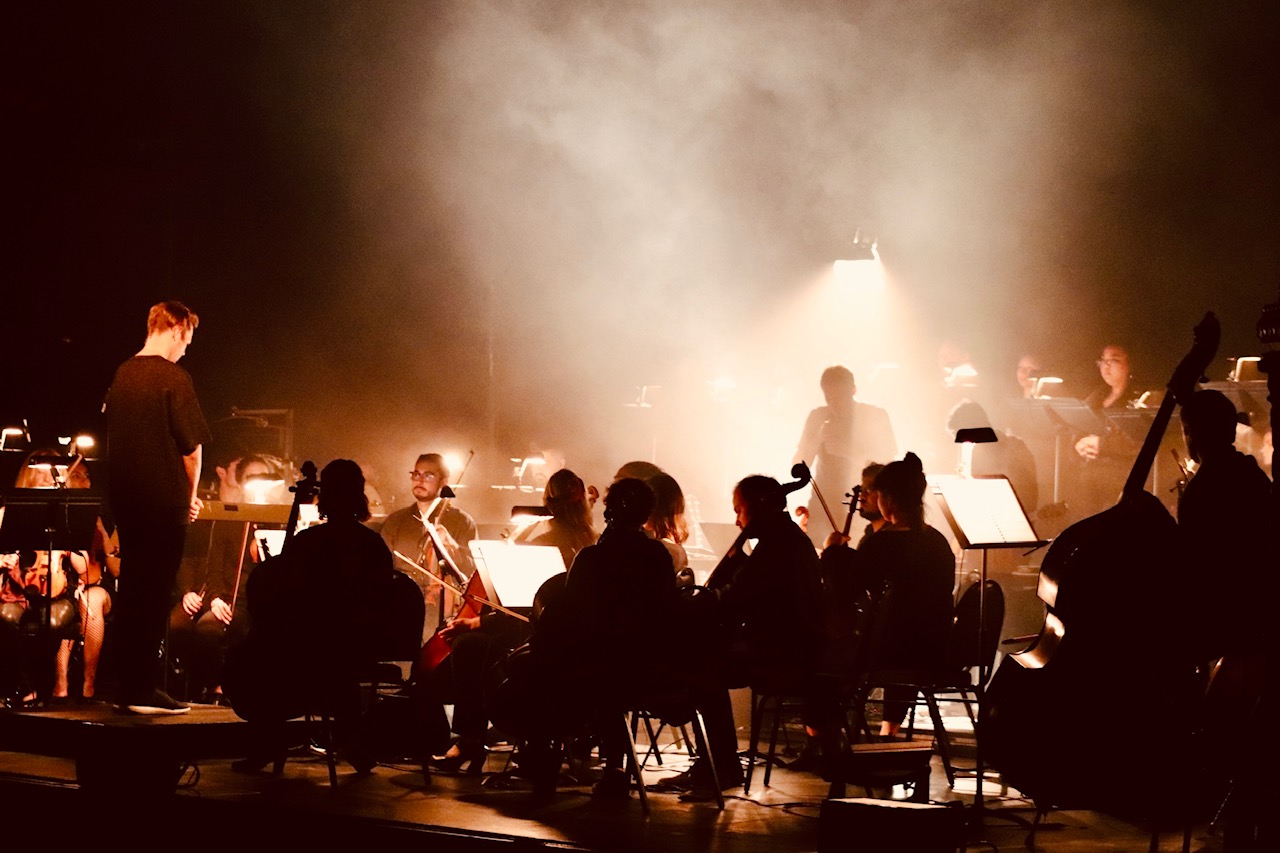 In fact, Riceboy Sleeps was almost lost before it came to be. The hard drive containing the bulk of recordings crashed, leaving them with just the stereo mixes. Jónsi and Somers left their Icelandic home for Hawaii, where they worked off the grid and recreated the 65-minute treasure. Its material has only been performed live at The Church of St. Paul the Apostle in New York in 2010. The duo also released a limited-edition book and staged exhibitions of their drawings and artwork together, also under the name Riceboy Sleeps. 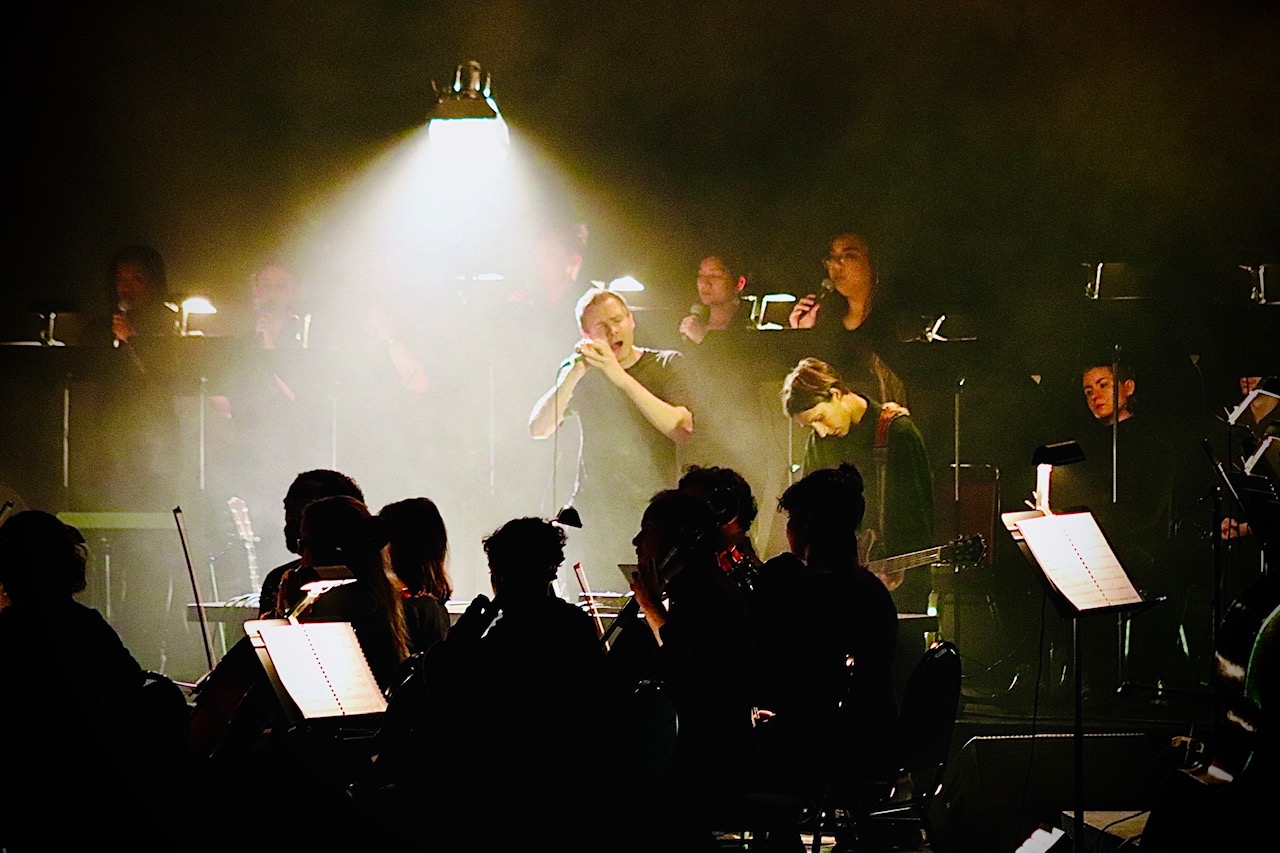 Closing the evening with “Sleeping Giant,” the sounds of static feedback slowly intensified. The intricate tension kept building—but soon the rough sounds softened, strings took over, and everything felt smooth. Like taking a deep breath, the composition’s blissful softness was relieving. Specs of static reemerged and crackled to one final pop. 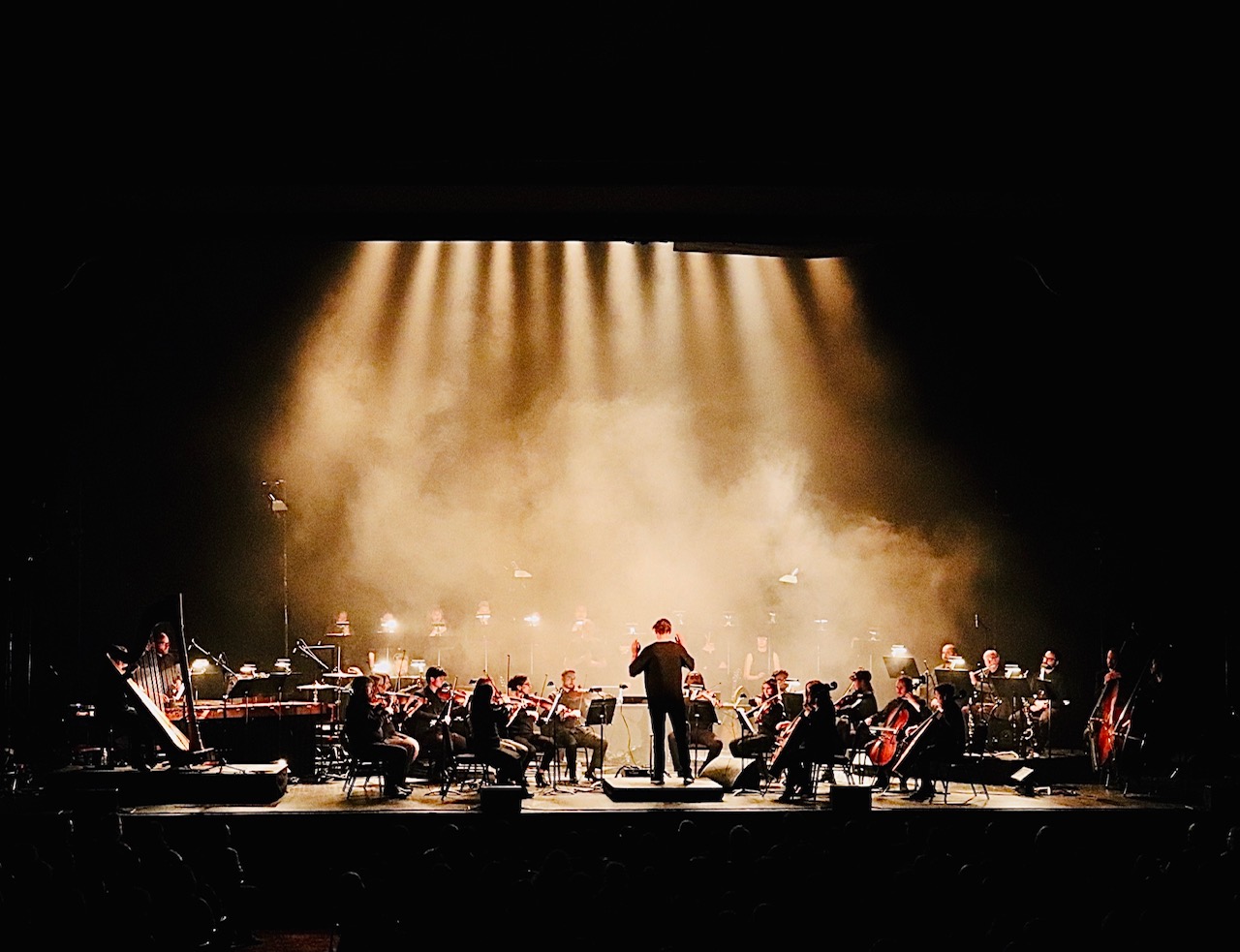 One by one, musicians walked off stage. Then Ames. And finally, Jónsi and Somers. Grateful for the complicated yet serene experience, the crowd jumped to their feet and clapped. As the room filled with light, everyone came back and said “Tak,” took not one, but two bows, and bid adieu.