In a day and age where most metal sounds overly polished and mechanical, Spirit World set out to prove to the world that real metal is not dead yet, far from it.

The mastermind behind Spirit World, Stu Folsom, has pulled out all the stops on this album in creating a modern version of the sublime hardcore/metal releases of the past. You won’t find overcomposed and overproduced set pieces here, no, instead you will find plenty of pummeling riffs, harsh vocals, and slamming blast beats.

The record’s lyrical themes focus on Satan returning to earth to purge the planet of humans, and one cannot help but imagine the apocalyptic scenario playing out just as Folsom’s lyrics describe. Yes, most metal albums tend to deal with dark subject matter, but Spirit World do so in such a convincing fashion that it makes most “evil” metal bands sound tame by comparison.

Produced by Sam Pura (who also takes on bass duties), Pagan Rhythms gives a modern update of the 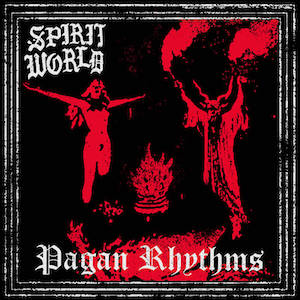 classic sound of thrash and hardcore. In many ways this album recalls the classic Slayer record Reign in Blood in its crunchy riffs, apocalyptic imagery, and short runtime. The opening title track rips through a mid-tempo groove that just crushes your skull with its barrage of jagged guitar riffs. Then things really start to get moving on “The Bringer of Light,” another midtempo stomper before exploding on the following song, the crushing “Unholy Passages.” There are few things as satisfying as hearing all hell break loose as a powerful and speedy blast beat opens the piece. With drummer extraordinaire Thomas Pridgen (ex-The Mars Volta) blasting away on many of these tracks, it’s impossible to not get swept up in the sheer power of these songs.

The aptly named “The Demon Storm” is another highlight, riding another set of slash and burn guitar riffs over an almost-danceable beat. Just as you think the song is ending, it breaks into a nifty little acoustic country guitar figure, giving the listener a little break before the next burner, “Armageddon & Honkytonk Saloon,” gets going. Really though, while there are plenty of great tracks, Pagan Rhythms demands to be listened to in one sitting all the way through. Each track fits together so seamlessly that time will seemingly fly by at warp speed during a listen.

In a world where music is increasingly made on laptops, hearing actual humans bash the shit out of their instruments is truly a breath of fresh air. If you like your music fast, heavy, and uncompromising, check out Pagan Rhythms, the best metal release so far in 2020.