Few bands in the metal world are as prolific as Lord of the Lost. Between live releases, studio albums, and symphonic ensemble records, the band churns out gripping and dynamic music at a dizzying clip. Swan Songs III is another ensemble piece featuring new songs and symphonic reworkings of songs from their most-recent albums. The double album starts out with 12 new songs that see the band working with the Lord of the Lost Ensemble to craft some gripping and majestic pieces. Frontman Chris Harms has truly mastered his vocal range and each one of these songs fits right in his brooding mid-range. With lush strings and piano anchoring the opening song, “A Splintered Mind,” things get started on the right note.

Just because this album features little in the way of the traditional heavy metal elements, it does not mean it is any less epic or brooding. Songs such as “Zunya” contain the same grandiose elements of a typical Lord of the Lost song, featuring plenty of swirling melodies and soaring vocals.

The standout song on the first album is the anthemic ,“We Were Young”  is a piece that featured a full 70-person choir. Built around a stately piano figure and a brilliant vocal hook, the song builds to an amazing crescendo that will have even the most edgy of listeners humming along.

Album #2 features reworked versions of old Lord of the Lost songs, stripping away the grinding guitars and 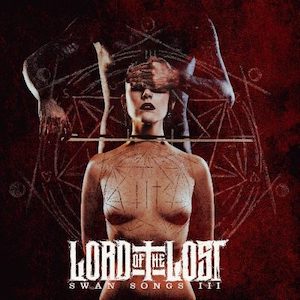 pulsing synths and replacing them with strings and piano. Reworking metal songs is always a challenge but Harms and Co. have done this so many times before that these reworkings are seamless. The surging metal of a song like “Morgana” works quite well in its new arrangement, with the vocals and piano taking on the bulk of the melodies normally reserved for the electric guitar.

The key to understanding a record like Swan Songs III is to treat each song as a new composition, even if the bare bones songs might be familiar to you. Most of the reworked songs sound nothing like their originals, with tempo and key changes prevalent throughout.

This is most apparent on the brooding and soaring “Seven Days of Anavrin,” which is transformed from its original metal form into a majestic symphonic piece. Featuring some of the catchiest vocal melodies on the entire album, the song is worth repeated listens.

Many of these songs would not be out of place on a film soundtrack, such as the bombastic “My Heart Is Black,” a piece that rides a military-inspired drum beat along with plenty of soaring strings and hard/soft dynamics: pulling in for the verses and exploding for the choruses.

The most challenging and rewarding song on Swan Songs III comes in the form of the closing 18-minute epic, “Letters To Home.” In the vein of traditional classical pieces, the song moves through a web of different sections, slowing, building, and then releasing tension before reaching a dramatic conclusion.

For anyone who is a fan of dark classical or metal music, Swan Songs III is a great album that shows Lord of the Lost are one of the most daring and adventurous bands in the world today.

Watch “Morgana” by Lord of the Lost: