Hometown favorites Machine Head came to the Fox Theater on a Friday night to play in front of a packed audience. That alone would be a good cause for celebration but this night was special as the band played an insane three-hour set that included a performance of their legendary debut album, Burn My Eyes.

The band wasted no time, promptly walking onto the stage right as the clock hit 8PM, ripping through a thrashing version of “Imperium.” While much has been made of the lineup changes in the band in recent years, new additions Wacław Kiełtyka and Matt Alston sounded excellent and they are both capable replacements for Dave McClain and Phil Demmel. For the first half of the set, the band alternated between newer songs and old favorites. What makes the newer songs such a blast to hear live is that they are typically very long and contain some stunning guitar harmonies as well as some tasteful melodic singing from Robb Flynn. There were plenty of instances where Kiełtyka got to show off his impressive guitar skills, especially on the song “I Am Hell,” which featured a dizzying array of complex guitar parts. 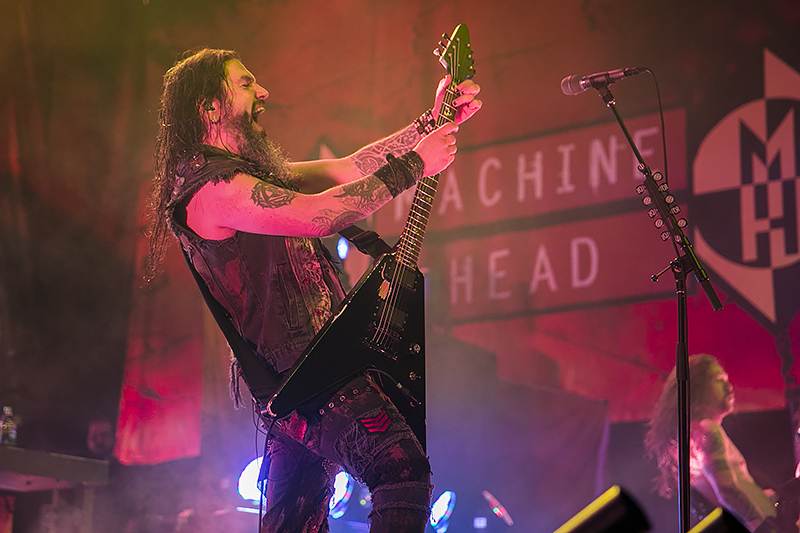 There were plenty of moments when Flynn took to the mic to thank the fanbase for turning out, and at one point he recounted the first show Machine Head ever played at a house party in Oakland not too far away from the Fox Theater. It was an illustration of just how far the band has come since those humble beginnings. The band finished off the first part of the set with a creative cover of the Iron Maiden classic “Hallowed Be Thy Name,” and an epic rendition of “Halo,” before taking a brief break. 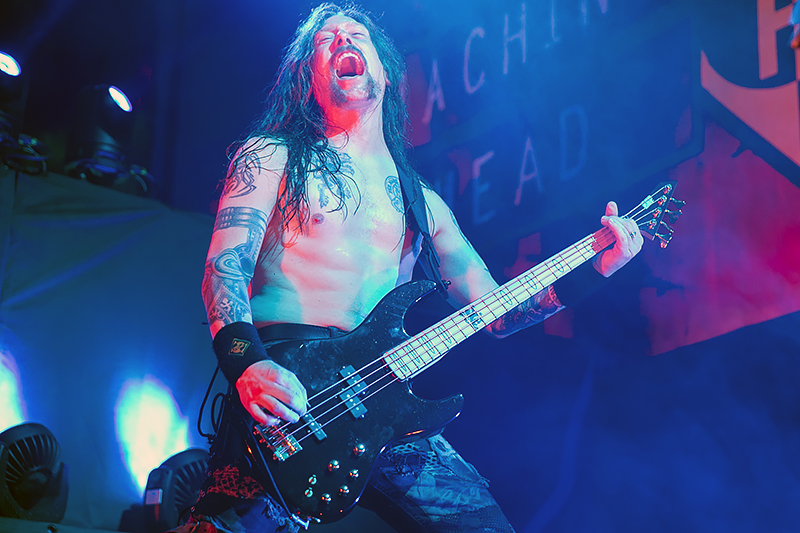 While newer Machine Head songs have their own merit, one of the main reasons fans had come out to the show was to see the long awaited reunion of Flynn with guitarist Logan Mader and drummer Chris Kontos, who both played on the genre-defining Burn My Eyes. 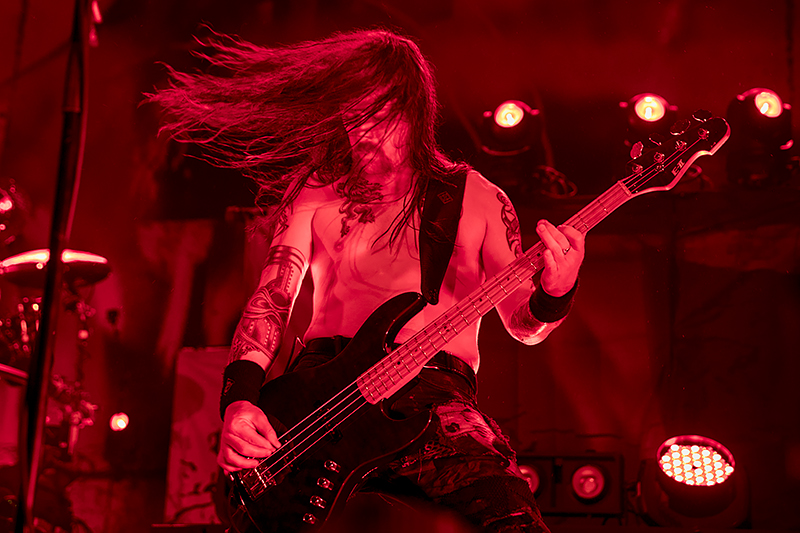 As the lights dimmed and the band returned to the stage, the roar from the crowd was deafening as Machine Head ripped through the punishing “Davidian,” the opening track on Burn My Eyes. 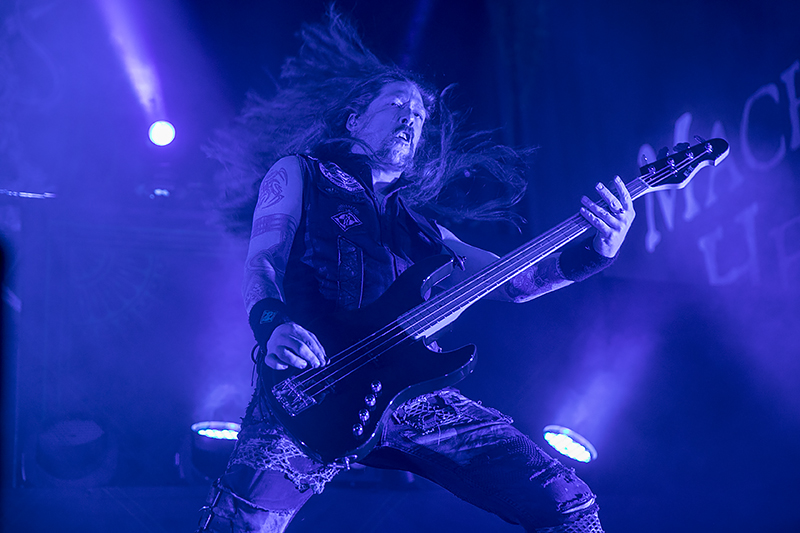 Between the pummeling drumming of Kontos and the slamming bass of Jared MacEachern, the song was quite impressive. The intensity only seemed to climb as the band made their way through the rest of the album, and this was especially apparent on the crushing “A Thousand Lies,” a song driven by a tight series of de-tuned guitar riffs from Mader and one of Robb Flynn’s most powerful vocal performances of the night. 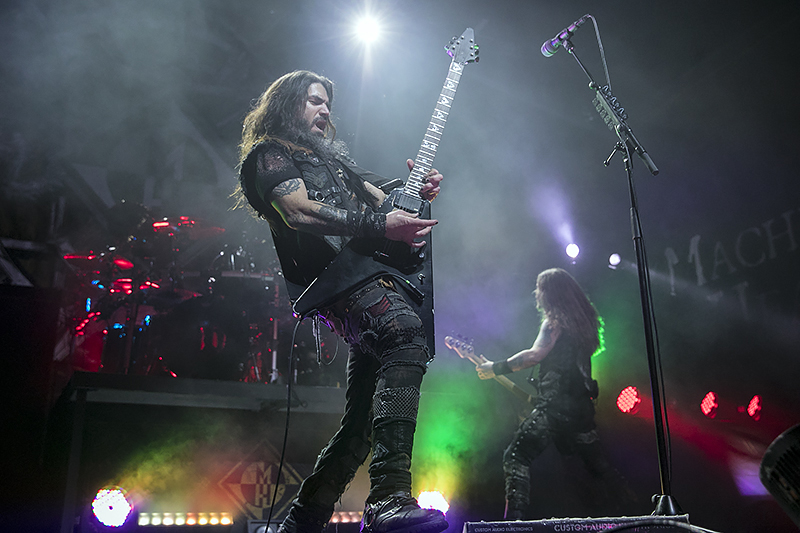 Kontos got to show off some of his technical mastery during a short drum solo before transitioning into the slamming “The Rage to Overcome,” which featured all sorts of wild guitar lines and really got the crowd back into it, with the mosh pit exploding once again. 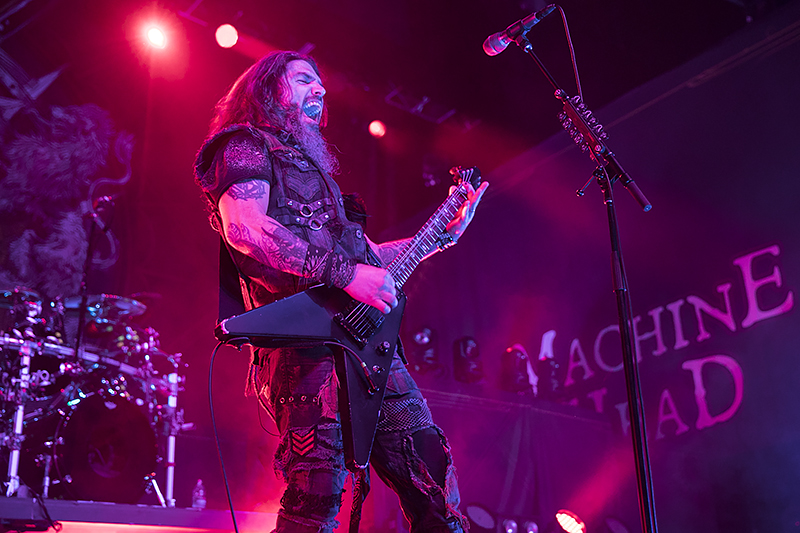 The band did slow things down a bit during the dark ballad “I’m Your God Now,” which featured some beautiful bass work from MacEachern but that was the only real downbeat moment of that part of the set. After doing a wild medley of cover songs that included Metallica and Accept, Machine Head finished out the evening with “Block,” another caustic blend of groovy guitar riffs and high-speed guitar freakouts. 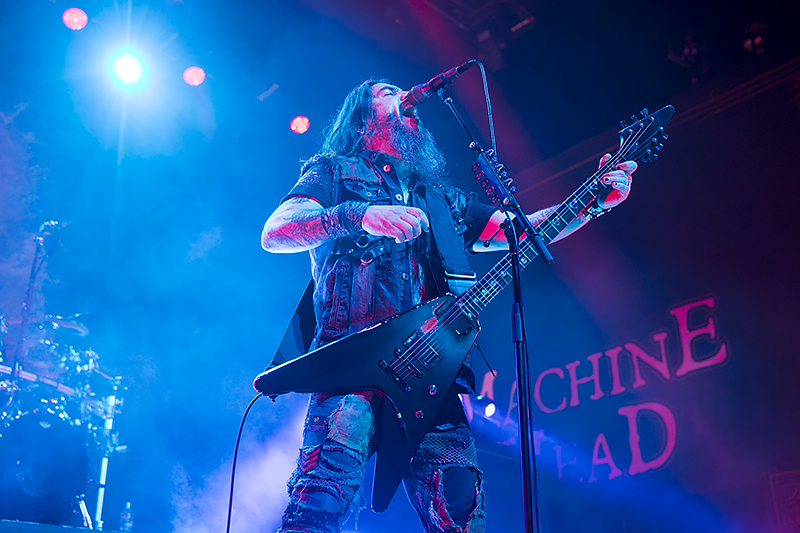 While most bands who attempt to perform old albums live fail to capture the youthful intensity and vigor of days long past, Machine Head blew that notion out of the water. Not only that, these versions surge with a kind of ferocity that the old studio recordings never had. By reuniting with Chris Kontos and Logan Mader, Robb Flynn gave fans something that they had been desiring for some time.

Setlist: Imperium | Take My Scars | Now We Die | Beautiful Mourning | Locust | I Am Hell (Sonata in C#) | Aesthetics of Hate | Guitar Solo | Darkness Within | Catharsis | From This Day |Ten Ton Hammer | Hallowed Be Thy Name (Iron Maiden cover) | Halo | Davidian | Old | A Thousand Lies | None but My Own | Drum Solo | The Rage to Overcome | Death Church | A Nation on Fire | Blood for Blood | I’m Your God Now | Cover Medley | Block