One of the heaviest bands in the metal world, Heaven Shall Burn have returned with a sprawling double album that pushes their sound in a bunch of different directions. Just by the name alone, you know that you are getting some of the most extreme European-style metal out there, as Heaven Shall Burn have built their reputation on having dense and overpowering records. With composer Sven Helbig (Rammstein, Pet Shop Boys) providing help with the orchestration that is featured on many of the tracks, the whole record has a certain grandiose vibe mixed in.

While there are plenty of fierce songs that recall their earlier work, such as the opening thrasher “Thoughts and Prayers,” the band has 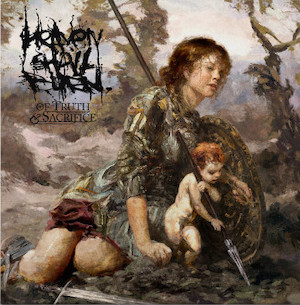 decided to expand their sound to include more experimental elements along with plenty of classical and techno flourishes. “Ubermacht” opens with an intro that seems more at home on an industrial or techno record than a metal album, until the band kicks into a slamming groove over which Marcus Bischoff howls in his typical low-pitched screams. The clear standout on the first part of the album is the anthemic “Eradicate.” Containing some of the most hook-filled guitar harmonies and vocal lines, the song continues to build until a brief breakdown featuring a guitar harmony comes in along with a flashy bassline from Eric Bischoff, upping the tension and getting one’s blood boiling.

This record is certainly not for the faint of heart – these songs are constructed around dense guitar parts from Maik Weichert and Alexander Dietz, who are able to blend detuned atonality with tasteful and melodic leads. The whole thing has an epic feel and sound to it that most bands only dream of creating.

On the second half of the album, titled And Sacrifice, Heaven Shall Burn get a little more experimental with their songwriting, which acts as the perfect complement to the first half of the album. The main example of this is the sprawling goth metal epic “The Sorrows of Victory,” which features some mournful guest vocals from Lord of the Lost’s Chris Harms. The song eventually picks up in speed and ferocity as Christian Bass throws in some inhuman double bass drum work before Dietz takes control for one of his most impressive solos on the album.

Towards the end of the album, the band throws in a blistering cover of the Nuclear Assault song “Critical Mass,” revving up the intensity even more than the original. This serves as a perfect counterpoint to the following song, “Eagles Among Vultures,” a more groove-oriented track that rides a propulsive drum beat along with plenty of snappy guitar riffs.

The closing song, “Weakness Leaving My Heart,” is another slow burner, opening with plenty of gloomy orchestral parts before a winding guitar lead takes over along with some of the harshest vocals on the record. The song ends Of Truth and Sacrifice on a melancholic note, and the band would not have it any other way.

If you like your music loud, heavy, bombastic, and epic, this is the album for you.