There were some indicators on the previous Deafheaven album, Ordinary Corrupt Human Love, that the band was expanding their sonic palette, and that new arrangements and even clean vocals were going to be an integral part of their sound moving forward. Still, the total absence of any vestiges of the old Deafheaven sound on Infinite Granite is still a bit jarring for the listener. Gone are the atonal bouts of fury that characterized their previous work, no more of George Clarke’s vicious snarls, instead we hear him actually singing.

It’s clear from the opening track, “Shellstar,” that this album is going to be a lot different than what one would expect: expressive vocals, clean guitar tones, and some subdued, almost jazzy drumming from Daniel Tracy, a far cry from his shattering blast beats on albums like Sunbather. There is something to be commended on Infinite Granite, as Deafheaven still manage to make exciting and exhilarating music in this new genre, such as the twisting shoegaze of “In Blur” which features some beautiful twin guitar interplay 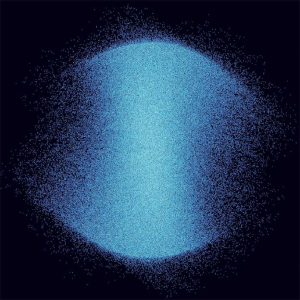 from Shiv Mehra and Kerry McCoy. Working with acclaimed producer Justin Meldal-Johnsen (M83, Paramore, Beck) gives the band it’s clearest sound of any record, especially when it comes to the low end. Bassist Chris Johnson complements each song with very solid basslines that cut through the mix well, sitting just on top of the kick drum.

The only issues on Infinite Granite are due to the sameness of many of these tracks, which is not necessarily a bad thing. On previous Deafheaven albums there was a bit more variety to the sonic attack, and songs would change pace/feel at the drop of a hat. Too many of these songs tend to blend together, and while Clarke sings well, his lack of range also contributes to this.

Still, there are plenty of very strong songs here, such as the lead single “Great Mass of Color,” which uses plenty of push-pull dynamics as it winds through its various parts. The closing track, “Mombasa” is the best one on the whole record and it is the perfect combination of old and new sounds from the band. The piece begins with a mournful acoustic guitar figure that slowly builds into a shimmering electric guitar arpeggio. Eventually, Clarke comes in with some of his most ethereal sounding vocals on the record, and the song slowly builds before at last the band rediscovers they are a heavy metal band, cranking up the distortion as Clarke begins to scream over a flurry of double bass.

Deafheaven have made a name for themselves over the past decade by not playing by the normal rules of a heavy metal band, and on each album they continue to expand and develop their sound. Infinite Granite is another strong record and it is probably the most important record the band has made as it demonstrates their skills and their ambition stretch far beyond that of a regular metal band.