Few bands in the metal underground have shone as brightly as Pallbearer, who have developed into one of the best doom metal bands around over the course of their three previous albums. However, what sets the band apart is their willingness to expand their sound to include prog-rock elements, something that becomes apparent when listening to their newest full-length record Forgotten Days.

While the production still has plenty of grime and grit to it, the band has honed down their sound: equal parts de-tuned lumbering riffs and spacy prog-rock sections. This is apparent from the sludgy riffs of the opening title track. What is also apparent are the much-improved vocals from Brett Campbell, who has really come into his own on this album. On previous releases, he was always mixed a bit farther back but now he comes through crystal clear.

In addition to the vastly improved vocals, there is an improved sense of songcraft on these songs, there is 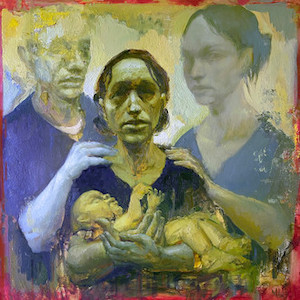 seldom a wasted moment, and each piece flows logically into the next. There are traces of goth-rock interspersed throughout, such as on the gorgeous “Riverbed,” which alternates between melodic guitar licks and surging metal. The centerpiece of Forgotten Days is the massive 12+ minute epic “Silver Wings,” which stands as one of the band’s best long-form songs. Slowly building through its many interlocking sections, the piece features some impressive dual guitar work from Campbell and Devin Holt. Towards the end of the song, there is a beautiful fadeout into a dreamy synth piece before the guitars come surging back in to finish things off.

There are still plenty of heavy tracks on this record, so don’t go thinking that Pallbearer have lightened up too much. The crushing “The Quicksand of Existing” relies on an arsenal of grooving riffs along with a soaring vocal performance from Campbell and some steady drumming from Mark Lierly. The closing track, “Caledonia,” is another strong highlight, with bassist Joseph D. Rowland alternating lead vocals with Campbell. The song features some of Rowland’s best bass work, anchoring the winding guitars of Campbell and Holt.

Pallbearer have once again delivered an impressive album, one that demands repeated listens. Due to the dense nature of these tracks, it’s hard to understand what is going on with just one listen. And it is that depth that makes Forgotten Days one of the best metal albums of the year.

Listen to “The Quicksand of Existing” by Pallbearer: