There has been perhaps no album in music history as eagerly anticipated as the newest Tool record, Fear Inoculum. For the past 13 years, fans have been waiting for the ever-mysterious band to release a new album. While the band was active during this time, going on plenty of massive tours that dazzled audiences with a sophisticated live show, the band’s dedicated fanbase continued to wail on the internet. While Tool have always been known to take their time in releasing albums, it seemed that the band would never actually do it, as if this whole process was just some big practical joke designed to troll fans once again. And then, slowly over the course of the past year it became clear that the band had indeed been recording music and that perhaps something would finally come out.

So, of course, the question is: does it hold up to the other four Tool records? Absolutely.

While Tool have nothing to prove at this point in their career, they have pulled out all the stops here, with a breathtaking and expansive record that is well over 80 minutes in length. In a day and age where most music fans are no longer interested in listening to full-length records and incredibly long songs, it is refreshing to hear a band like Tool make their longest album ever. Each song is a massive monolith, and besides a few 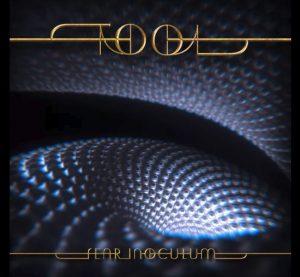 instrumental segues and an incredible Danny Carey drum solo, there is not a single song that is shorter than ten minutes. While most veteran bands are either playing it safe or failing at expanding their sound, Tool have made an album that is equal to anything else they have done in the past.

Yes, the band sounds much the same as before: the snappy and complex drum rhythms of Danny Carey, the slamming bass of Justin Chancellor, the textured and heavy guitar of Adam Jones, and the contemplative vocals of Maynard James Keenan, but that is not a bad thing in the least. Perhaps if this was the band’s 13th or 14th record things would get old, but that’s not the case on Fear Inoculum.

In terms of individual tracks its hard to pick out a favorite, though the mid-album epic “Descending” would be in contention. At 13+ minutes, the song moves along like a classical composition, shifting themes and variations over some of Chancellor’s best bass work.

Tool are notorious for being incredibly picky with how they write songs and that level of precision is present on the entire record, you can tell that there is not a single wasted or misplaced note. This is not an album for the faint of heart or the type of person who wants instant gratification, because these songs are long, but for those who are ready for it, Fear Inoculum is one of the most rewarding listening experiences out there. While there are no immediate singles or catchy songs like on past releases, there is so much music to digest that anyone who is a fan of Tool is going to be incredibly pleased.

Tool have accomplished something on Fear Inoculum that no other band has done: make an album in the late stages of their career just as good as any of their classics. So, stop what you’re doing and give it a listen already!