Fans from all over the world flooded into the brand new state of the art arena for a delightful grand opening of the Chase Center featuring round two of Metallica with the San Francisco Symphony (SFS). This whimsical collaboration came about from a twenty-year reunion, having broken through music barriers performing together at the Berkeley Community Theatre in the spring of 1999. Encrypted in music history with a great live documentation and album called S&M (Symphony and Metallica), this show has proven to have achieved high levels of legendary status well worthy of replication. 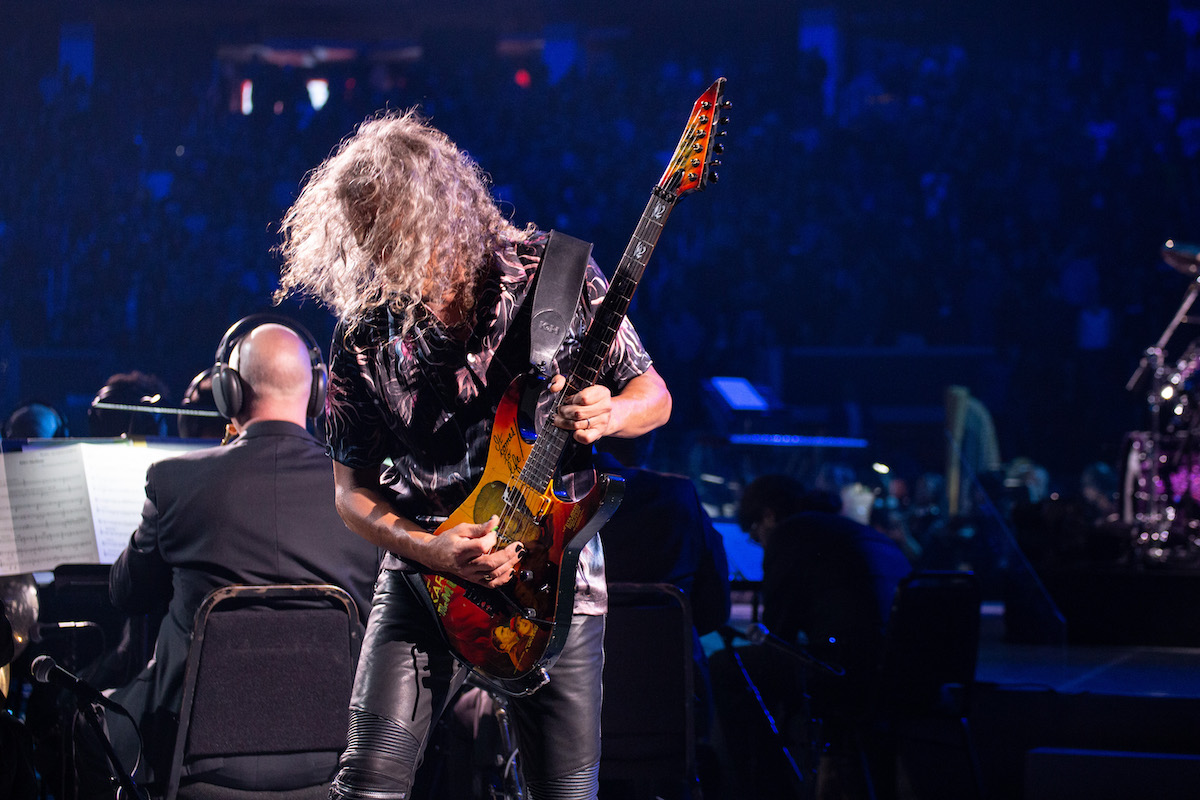 Metallica has been electrifying the air waves for 38 years with roots based in the Bay Area, as San Francisco became their haven for the power-driven riffs that emerged for a good majority of their career. The San Francisco Symphony has been donating brilliancy to the city for 108 years, providing generations of well mastered musicians bringing intricate compositions to life. Truly no better way to welcome home the NBA Champion Golden State Warriors to the Chase Center than with the epic reunion of San Francisco’s musical backbone under one roof. 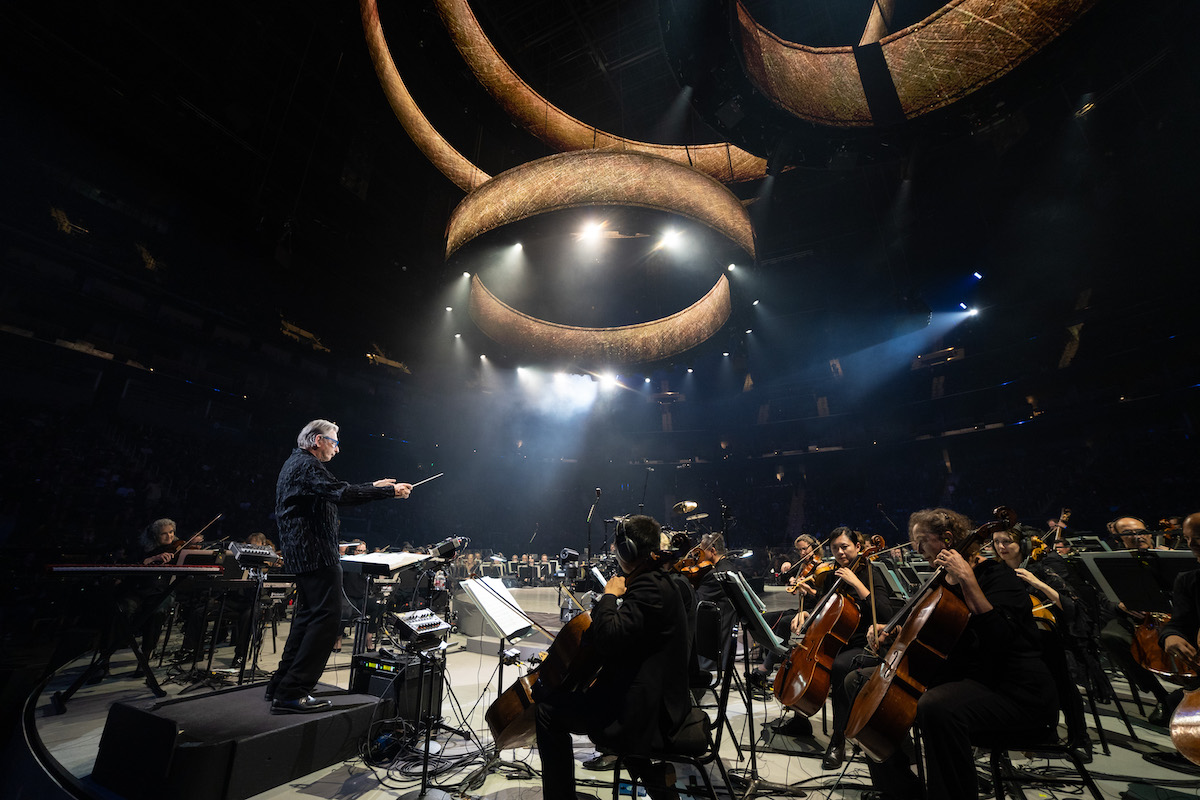 The 75-member symphony encircled the perimeter of the round stage planted in the center of the arena. Conducting the symphony was Edwin Outwater, with guest appearances from musical director Michael Tilson Thomas as they revived the twenty year old musical arrangements from the late Michael Kamen, who conducted the first S&M performance, and merged with new renditions by Bruce Coughlin. The symphony took their first deep breaths of the night as they begun with “The Ecstasy of Gold,” an Ennio Morricone song to brew a triumphant greeting for Metallica to step forth and take reigns on the instrumental “The Call of Ktulu” propelling the combined talents in motion. 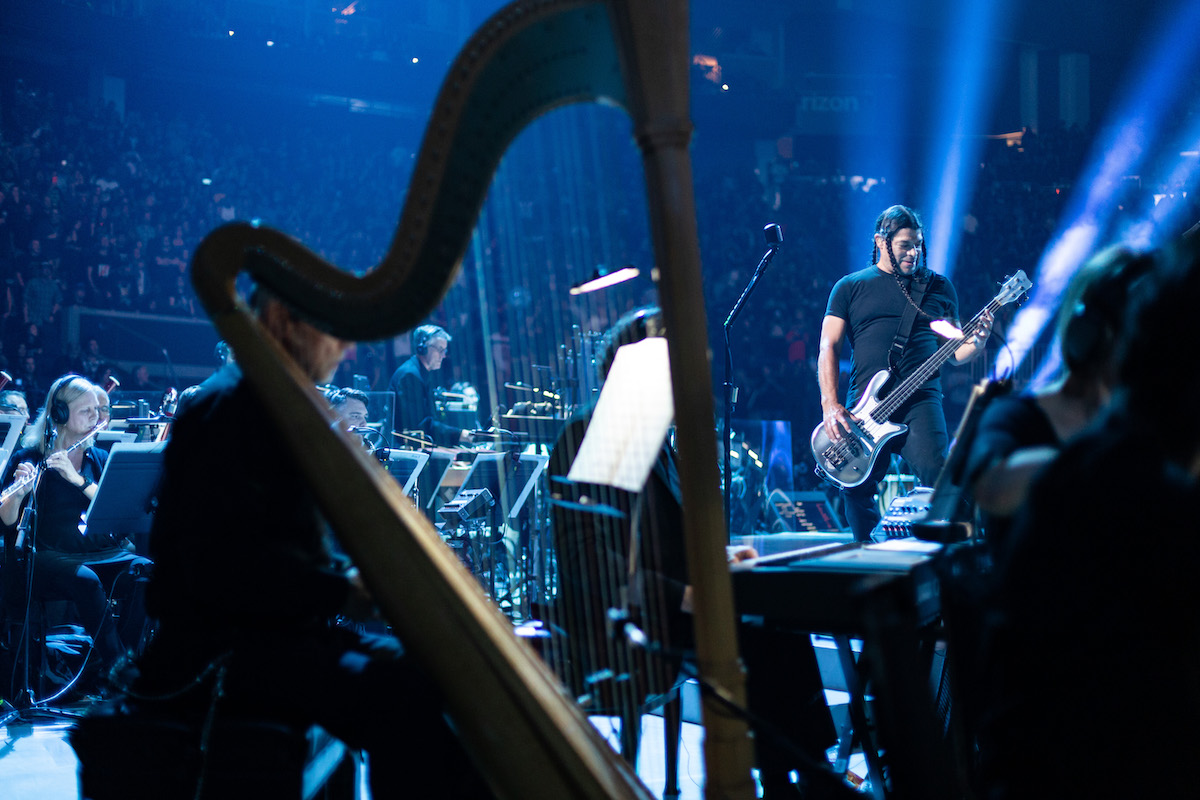 The first set had everybody out of their seats with fists pumping and brazen lyric shouting as the energy was spiraling around the arena like a storm from the epicenter of a cyclone. The SFS were rapidly firing notes to back the swift rhythms of the fast-paced drum hits by Lars Ulrich centered on the stage and expertly integrated their compositions to indulge in the build of intense complexity. 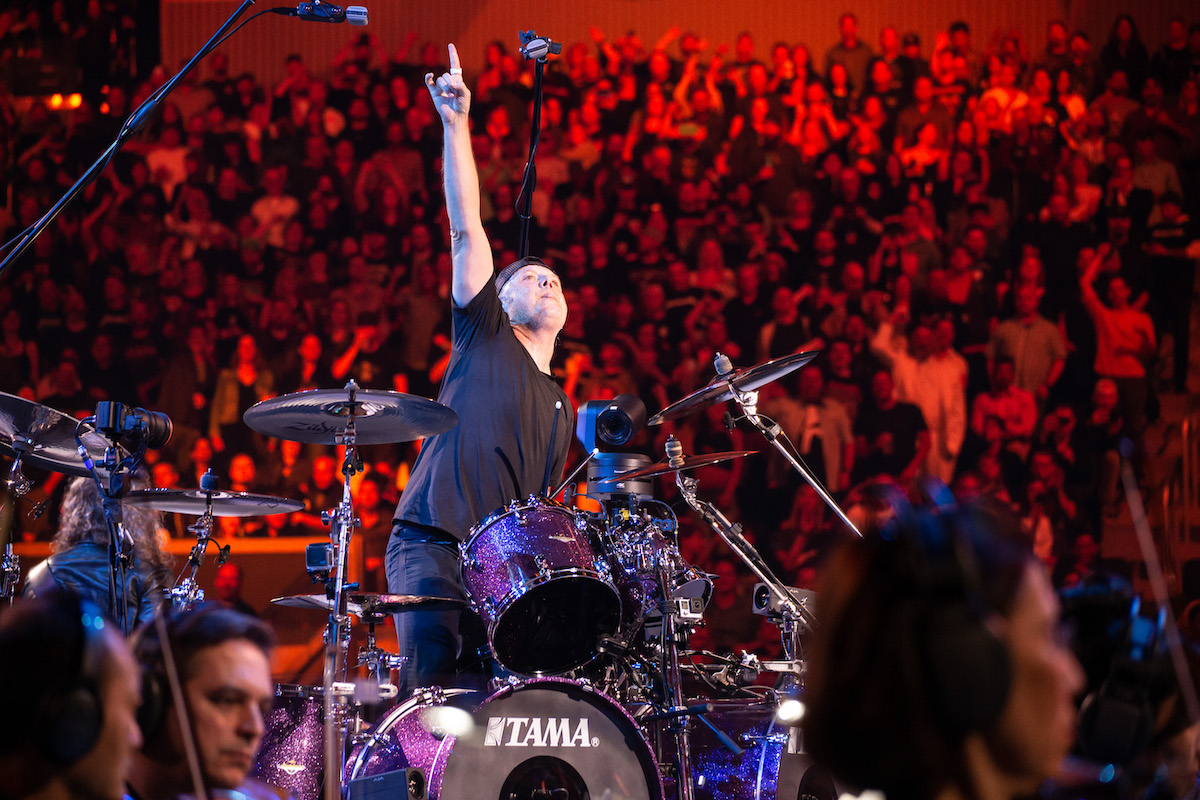 Metallica vocalist and guitarist James Hetfield shone through the chaos as his voice penetrated the storm with ferocity through the classics “For Whom the Bell Tolls” and “The Memory Remains.” Guitarist Kirk Hammett maintained prominent licks swirling amidst the numerous strings with bassist Robert Trujillo erupting rumbling thunder as they rotated around the revolving stage with multiple mics and wah pedals placed on all sides. Different sized rings of circular screens hovered as halos above with high definition colorful graphics and clips of the musicians added an engaging addition to the ambiance. 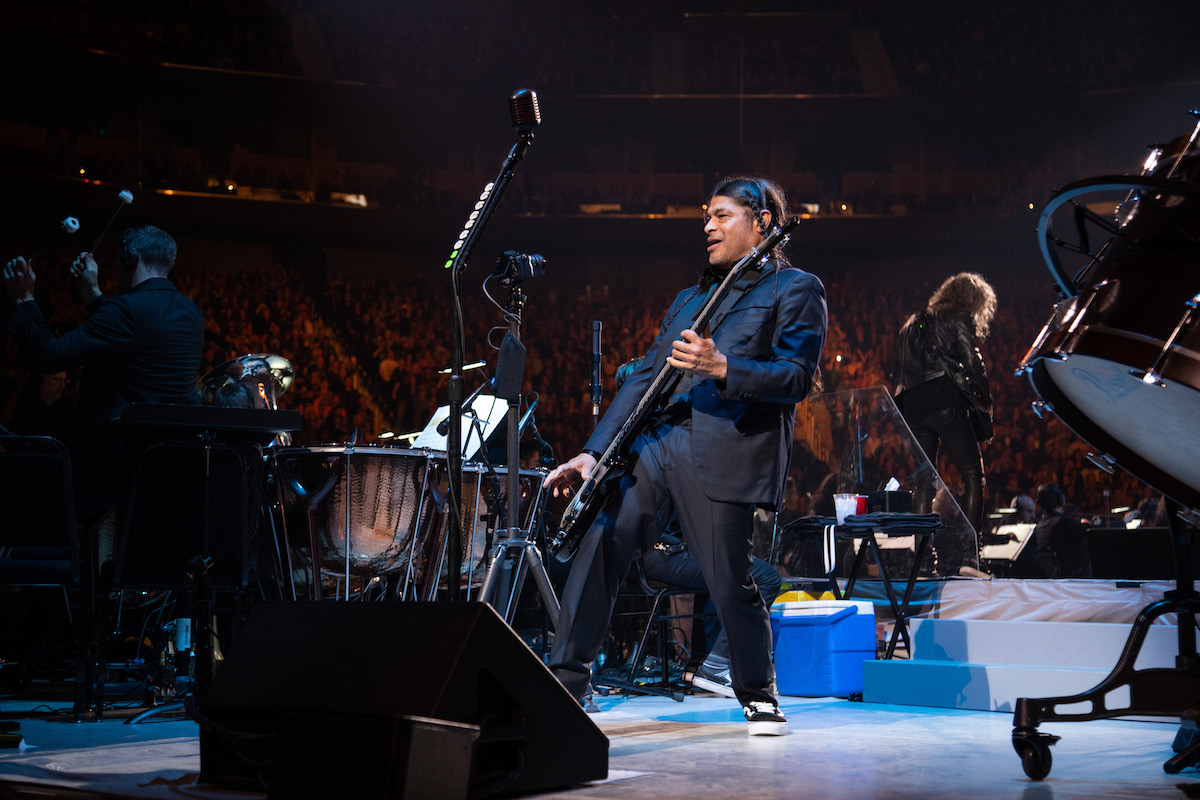 The second set achieved a symphonic treat to turn the audience on to a different genre of music than what they are used to by generously ushering in the classical realms. Beginning with a cover of “Scythian Suite, Op. 20, Second Movement” conducted by Michael Tilson Thomas, the symphony gradually embodied full flavor of their potential with striking enlightenment. Hetfield joined the SFS for “Unforgiven III,” providing only vocals amongst the symphony administering the dramatic arrangement. A moving tribute was made to the late original bassist of Metallica, Cliff Burton, as the primary bassist from SFS, Scott Pingel came out and soloed on an electric upright bass to texturize the Burton signature “(Anesthesia) Pulling Teeth.” Ulrich came out to join Pingel halfway through the song completing the first full performance of this tune since 2013. 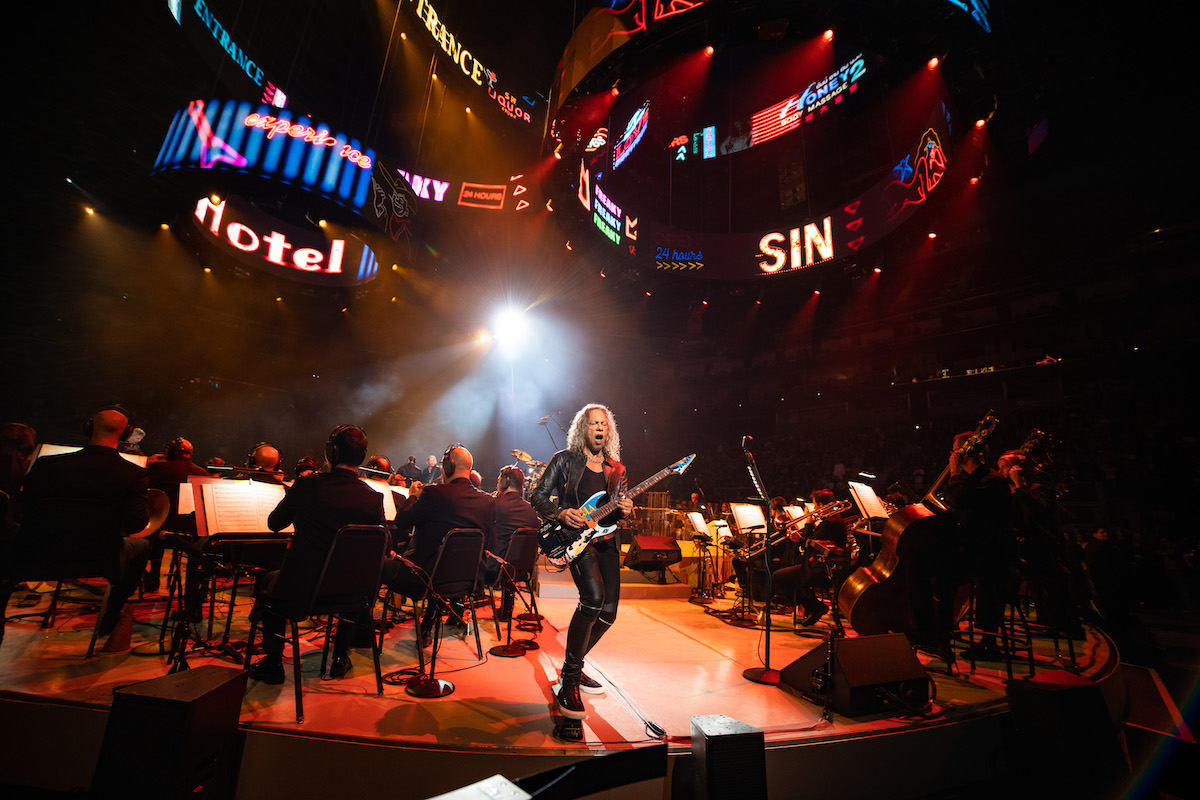 Metallica amped up the crowd with the 1986 iconic classic “Master of Puppets” fueling the resurgence of adrenaline before slowing it down to “Nothing Else Matters.” This soulful ballad balanced beautifully with the orchestra grasping the emotional conception through harmonized layers of a sensational vibrations soaring along with thousands of phone flashlights in the crowd (and a few lighters) enriching a sacred celestial space. Kicking it back into gear with the last song of the night, Metallica fired into “Enter Sandman” with Thomas conducting the climatic presentation and transitioning to keys for a subtle fade into “The Frayed Ends of Sanity” for a strong finale. 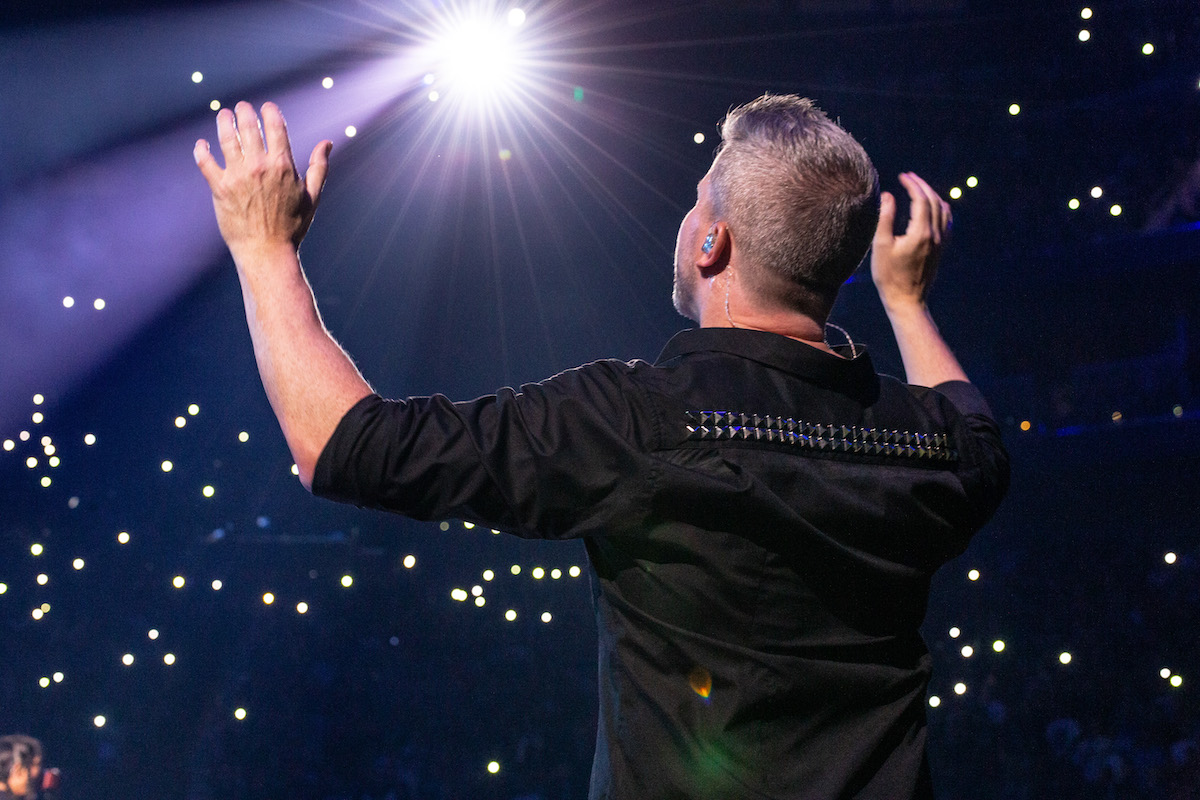 Adding to the celebration of opening the Chase and reuniting Metallica with the San Francisco Symphony in another unique classical metal fusion, this concert also marked a first by the band to feature songs from all ten studio albums including S&M at a live setting. Due to high demand a second event was added on September 8th with tickets sold primarily to fan club members and thankfully the shows were documented again for a live recording called S&M2 anticipated to hit theaters worldwide on October 9.

Setlist: Set 1: The Ecstasy of Gold (Ennio Morricone cover) (performed by the San Francisco Symphony) | The Call of Ktulu | For Whom the Bell Tolls | The Day That Never Comes | The Memory Remains | Confusion | Moth Into Flame | The Outlaw Torn | No Leaf Clover | Halo on Fire | Set 2: Scythian Suite, Op.20 Second Movement (Sergei Sergeyevich Prokofiev cover)(performed by the San Francisco Symphony) | Iron Foundry (Alexander Mosolov cover) | The Unforgiven III | All Within My Hands | (Anesthesia) Pulling Teeth (Bass solo by Scott Pingel) | Wherever I May Roam | One | Master of Puppets | Nothing Else Matters | Enter Sandman (with ‘The Frayed Ends of Sanity’ outro)