The unstoppable metal machine that is Judas Priest rolled into the Warfield for a two-night stand, with the legendary band ripping through some of the most inspired performances of their 50-year career. Tuesday night’s performance was the best of the bunch, with Priest ripping through a 19-song set that spanned most of their career. With a band like Priest it can be easy to replicate the past and trot out the same songs that fans are expecting. However, seeing as Priest is making their third US tour in the past 18 months in support of their latest record, Firepower, the band had a completely different setlist to surprise fans with. While there were some customary classics at the end, most of the set consisted of songs that have not been played in a very long time, if ever. 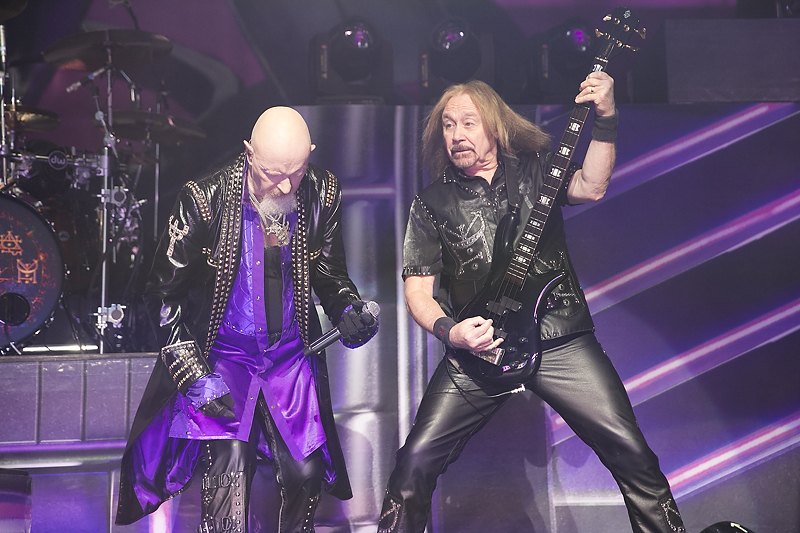 The band rolled onto the stage to rip through a track off Firepower, the crushing “Necromancer,” a song which saw frontman Rob Halford strutting onto the stage in a purple and black costume that was a metalized version of a voodoo witchdoctor. Next up was the first big surprise of the evening, a ripping rendition of the seldom played “Heading Out to the Highway,” a grooving rock song that featured plenty of tasty guitar harmonies from Richie Faulkner and Andy Sneap. While Faulkner dominated the night with his insane guitarwork, Sneap has really stepped into his role as co-lead guitarist for the band. Sneap of course, is known more for his work as one of the best metal producers on the planet, but his progression as a guitarist has been pretty remarkable. This was exemplified by the next track they played, the stunning “The Sentinel.” One of the iconic Judas Priest songs, “The Sentinel” featured a dizzying array of wild twin-guitar leads and an impressive mid-song guitar battle which saw Sneap and Faulkner trading off solos. 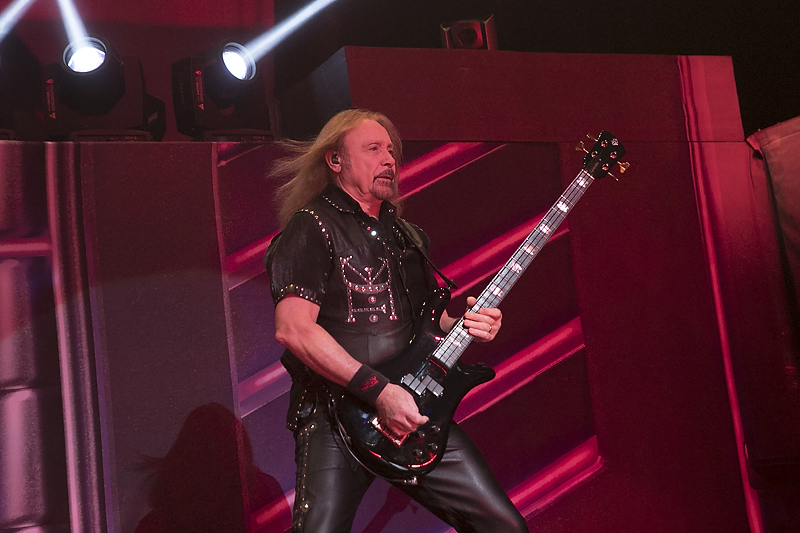 Judas Priest continued to trade off between old and new material for the next couple of songs, which included a rare performance of the rocking “Steeler” from the all-time classic album British Steel. Not content to merely play it how it was recorded, Priest upped the intensity and the tempo of the song, with Scott Travis delivering a propulsive rhythmic pattern to complement the fierce guitar riffage. Following this was the Halford vocal showcase “Halls of Valhalla,” showing once again that he is still one of the greatest singers in metal, displaying impressive vocal range in hitting some impossibly high notes. Following this, the band played the crushing “Tyrant,” a song that had not been performed live for over 40 years. Featuring some rock-solid bass playing from Ian Hill, the track was yet another astonishing moment from a concert filled with them. 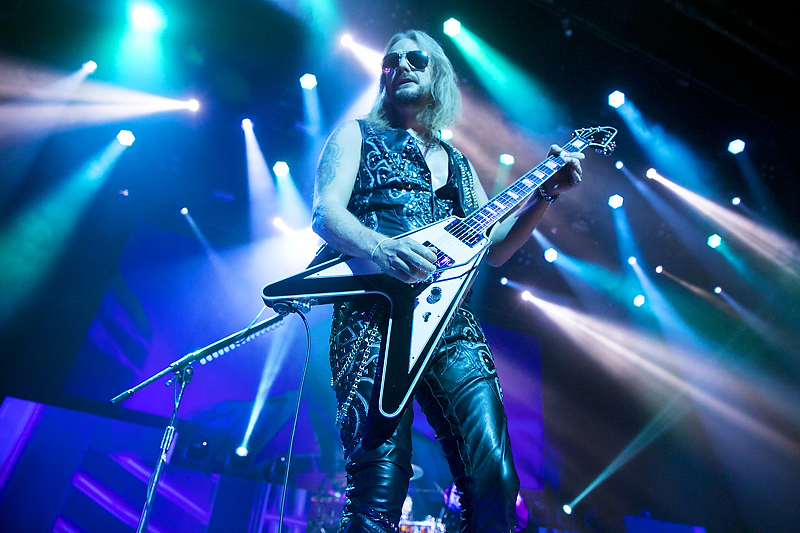 A few songs later the band closed out the main portion of the set with a crushing version of “All Guns Blazing” a ferocious track from their legendary Painkiller album. As has been the case ever since he joined Priest back in 2011, Faulkner was a monster on this song, ripping through a series of technically complex guitar solos with ease, and with a big fat smile on his face. For someone as ridiculously talented as Faulkner, he makes even the most technical runs seem like nothing at all. 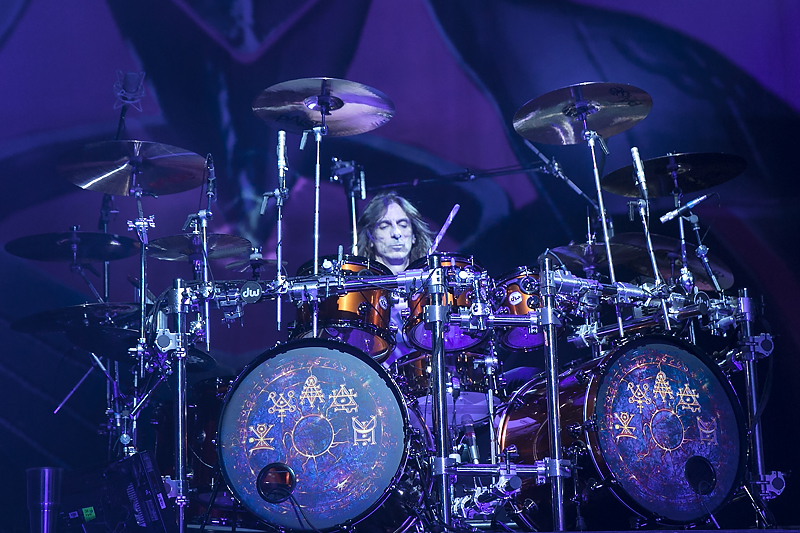 Of course, it would not be a Judas Priest concert if Halford did not ride out onto stage on a motorcycle during “Hell Bent for Leather,” which is exactly how the band started their encore. Then, after impressive renditions of “Breaking the Law” and “Living After Midnight,” the band triumphantly walked off stage. 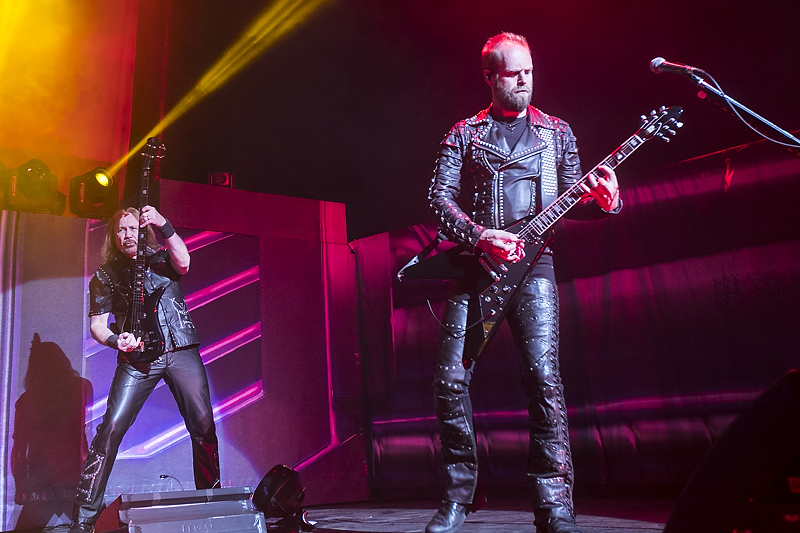 For a band in their 50th year of existence to still be able to deliver the goods on such a consistent basis is absolutely incredible and it’s a testament to the strength and firepower of this version of the band.

Here’s a slideshow with more photos of Judas Priest by Raymond Ahner:

Setlist: Necromancer | Heading Out to the Highway | The Sentinel | Spectre | (Take These) Chains | Judas Rising | Out in the Cold | Traitors Gate | Starbreaker | Steeler | Halls of Valhalla | Prelude | Tyrant | No Surrender | Hot Rockin’ | Victim of Changes | All Guns Blazing || Encore || Hell Bent for Leather | Breaking the Law | Living After Midnight