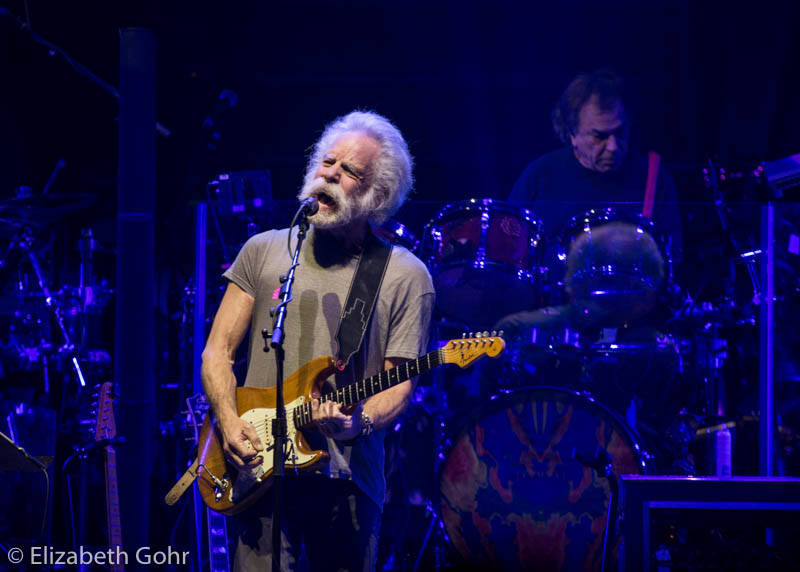 Performing at Chase Center, the city’s shiny new gem of a venue, the now four-year-old offshoot of the Grateful Dead turned their Fall Fun Run into a musical séance for their New Year’s Run. Coaxing the ghosts of Grateful Dead past to come together with the spirits of Dead & Company present, Weir and his cohorts spun their musical magic to create a bright spark of hope for the prospects of 2020. 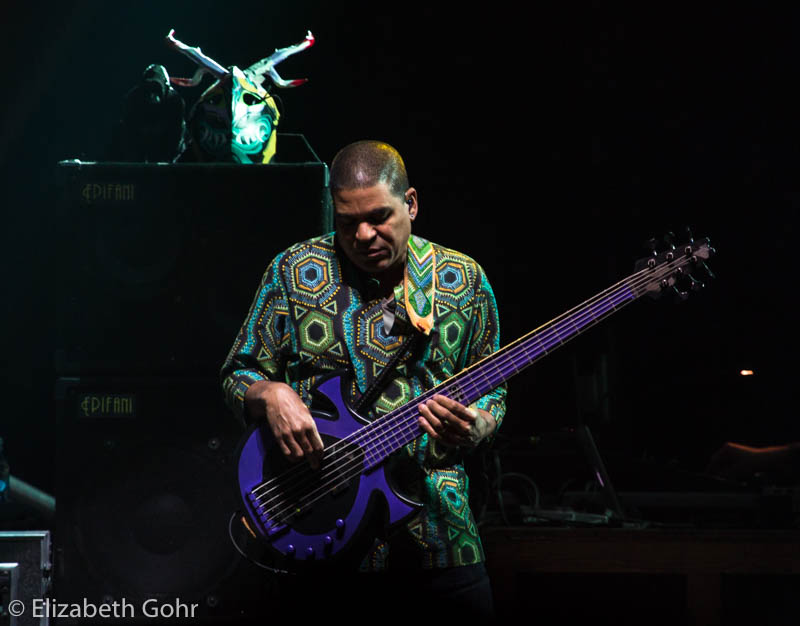 In doing so they prompted strangers to become new friends, and longtime friends to renew ‘family’ ties to their DeadHead brethren through music, dance, and celebration. 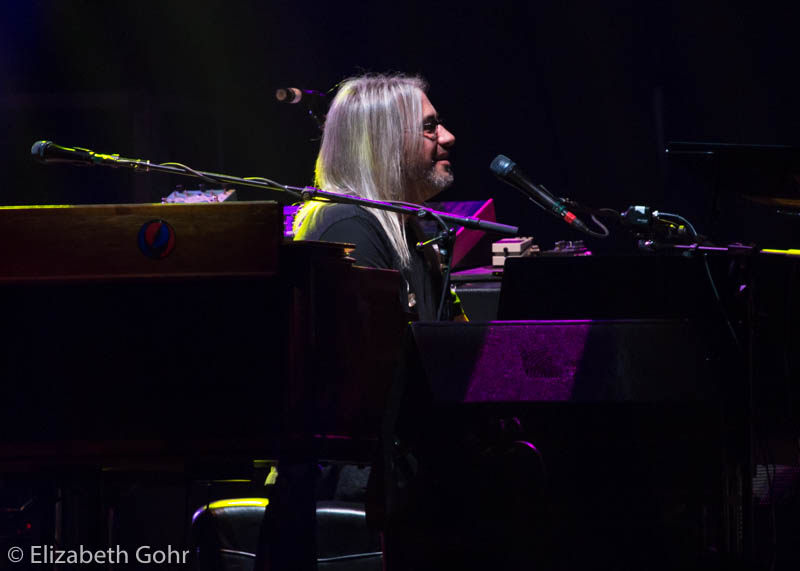 Though not touring on a new record, the breadth of the catalog from which Dead & Company draw their set list makes it so each show is a new experience. That combined with the energy injected into the core of the band by the likes of Mayer and Burbridge has reinvigorated a potential dinosaur to be one of the most vibrant touring acts in entertainment. 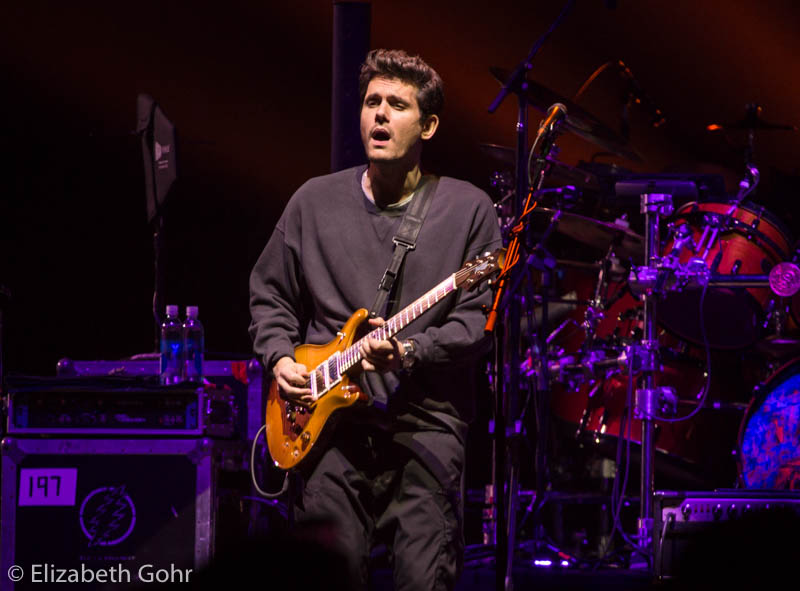 There were tons of naysayers when Mayer joined the fold, but those squeaky wheels have long since been silenced as he has taken full advantage of the opportunity to expand his musical credibility from ‘dreamy’ blues/pop cover) boy to jam band super star. 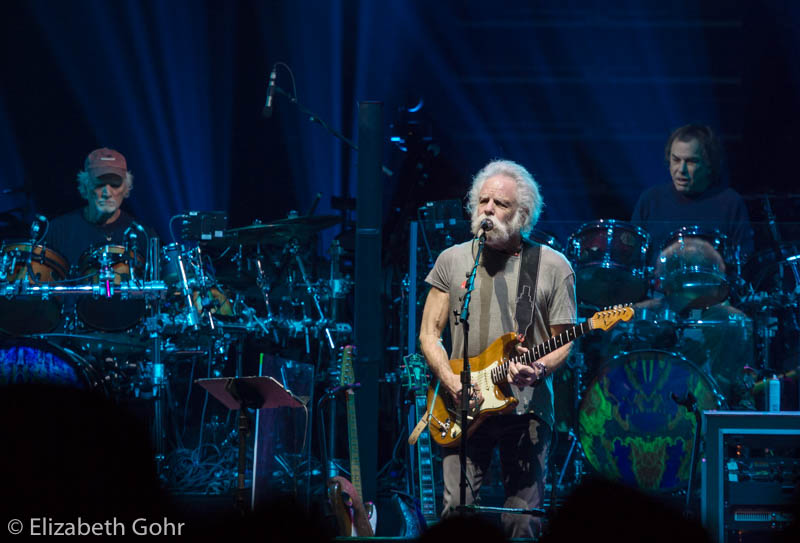 Mayer has done so by putting in the sweat and toil to learn the Dead’s catalog, history, and culture. He swallowed any pop star ego to become a key cog in a musical legend, and the benefit to Dead & Company has been that their music been exposed to legions of fans who may have otherwise not taken interest in the band. 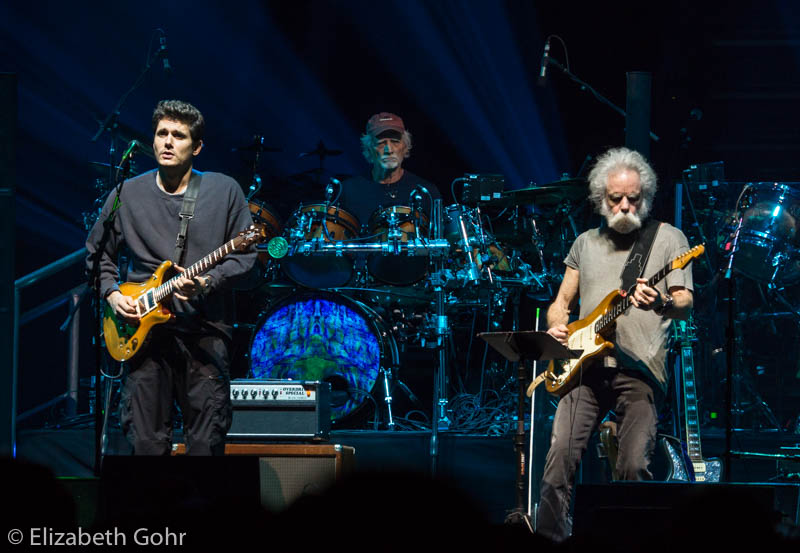 Mayer has emerged as a comfortable fit onstage in both the role of a supporting player to Weir’s lead, and also that of front man singing and playing to perfection for an audience who was not quick to embrace him. 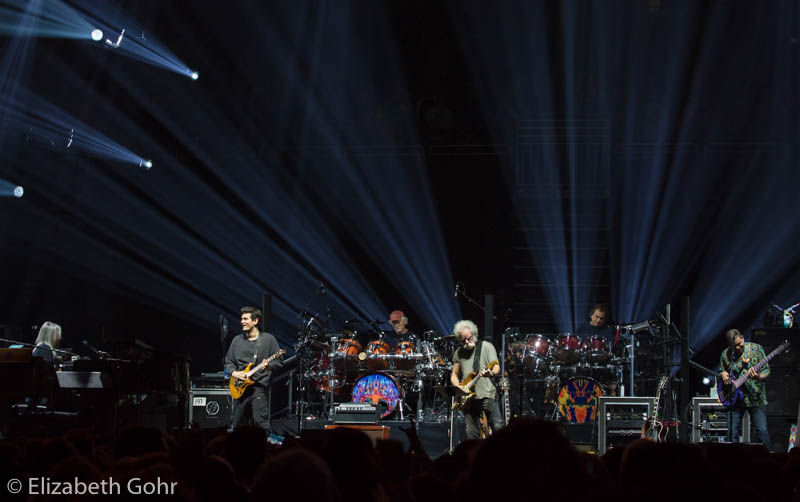 On this evening, Chase Center was dressed in epic holiday splendor looking like a gleaming present next to the largest Christmas tree in San Francisco. Dead & Company wasted no time to spread the holiday magic, kicking off with crowd favorite ‘Shakedown Street’ which had Weir up front leading the crowd in what became a singalong for 19,000. 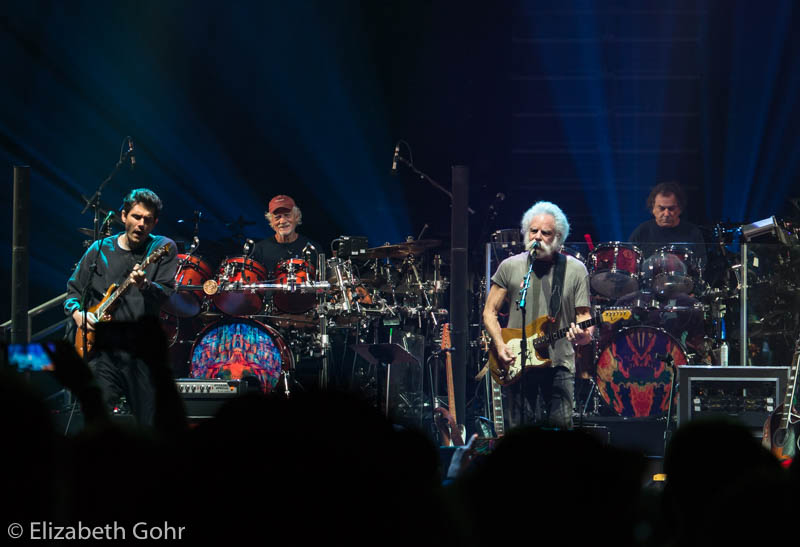 By the time the first set came to a close some seventy minutes later, it was the soothing, meandering ‘Bird Song’ that lifted the packed house with flashing lights adding surreal, psychedelic effect for a crowd that contained many who were already psychedelically affected. And it was Mayer’s back porch leads that were the perfect complement to Weir’s plaintive vocals. 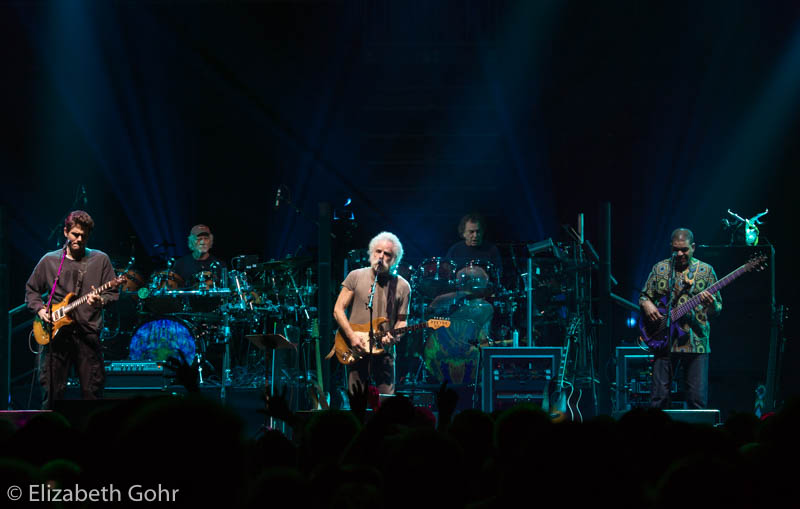 If the opening set was intended to get the party started, mission accomplished, though the ending seemed to come just a bit too soon for the crowd which was just getting a good pre-new year’s lather going. The set break though was also a short one (about 15 minutes), and when Dead & Co. returned it was as if they denied the existence of the break with a rendition of the Grateful Dead’s ‘The Music Never Stopped.’ 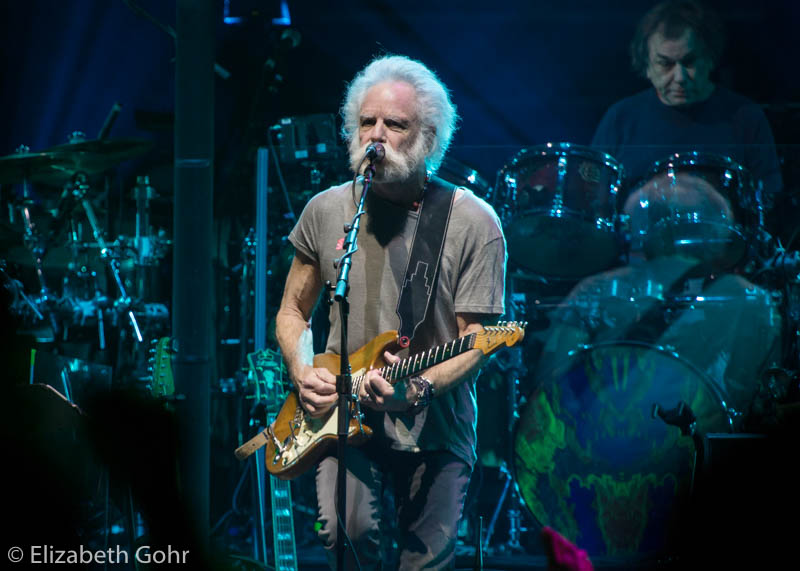 Now it was Mayer’s turn to step into the spotlight as he jumped into the deep end with an electrifying take at ‘Deal.’ As soon as the blues roll of the opening riff hit the atmosphere the crowd exploded in pandemonium singing along and spinning circles under the rainbow of lights that projected from the stage. 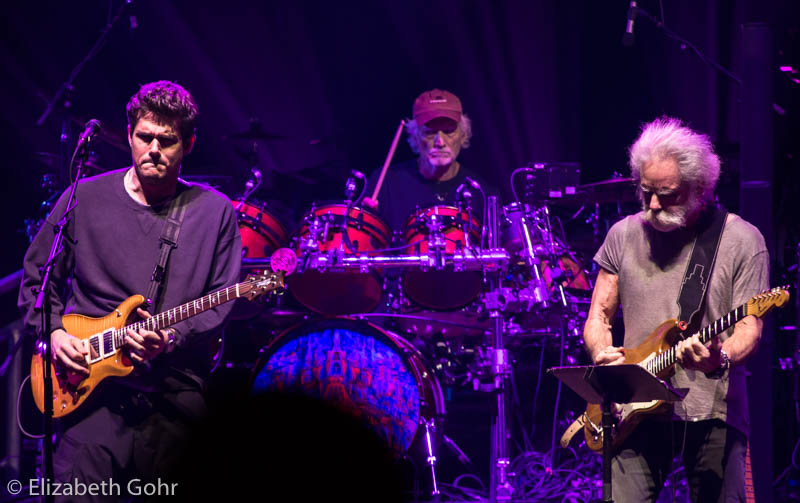 With the second set successfully lifted off, Mayer sidled up to Weir at center stage and added smooth soulful vocals that gave a surprisingly fresh face to the Dead classic ‘St. Stephen,’ amping the energy level even higher. 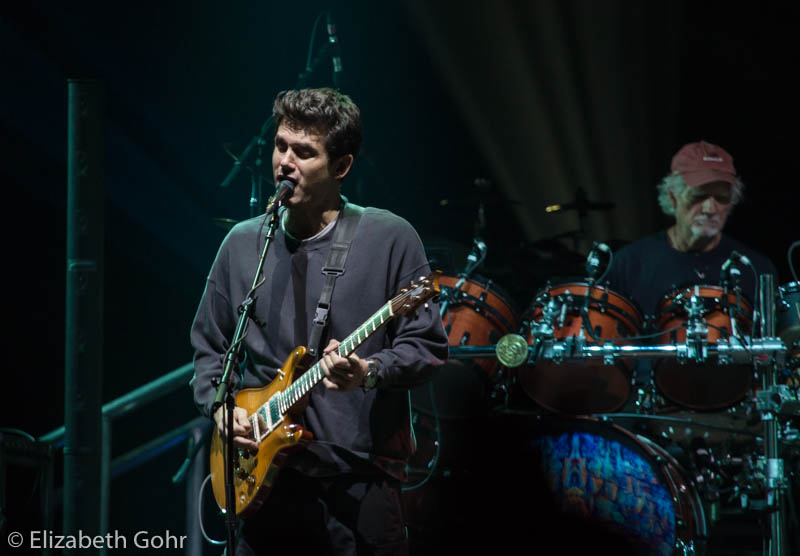 Swerving into the Bobby Blue Bland cover) ‘Turn on Your Love Light,’ soon a mellow drunk vibe permeated the room and seemed to push the music, hitting a peak with a fabulous performance of perhaps the most well-known Grateful Dead song, ‘Casey Jones,’ to close the second set. 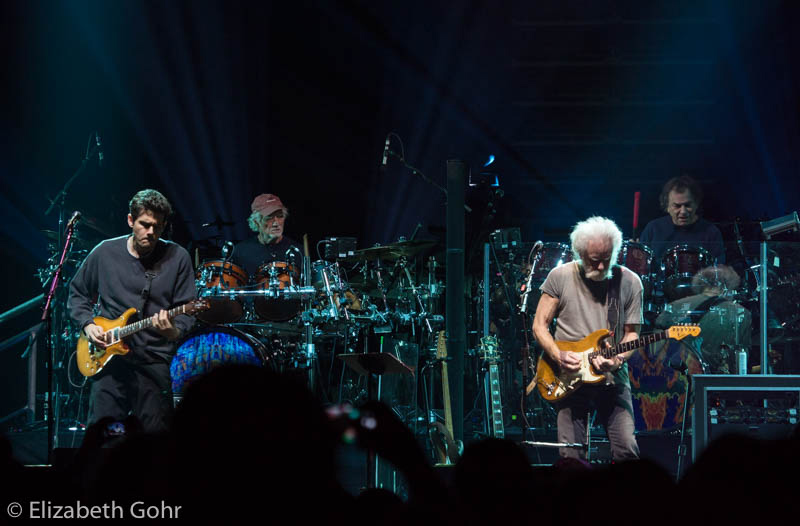 The crowd bellowed along with Mayer “Driving that train, high on cocaine…Casey Jones you better watch your speed.” By the time it was all done, the hypnotic psychedelic ride sent the band offstage, but the crowd was clearly not ready to say goodnight, stomping and cheering to call the band back for one more. 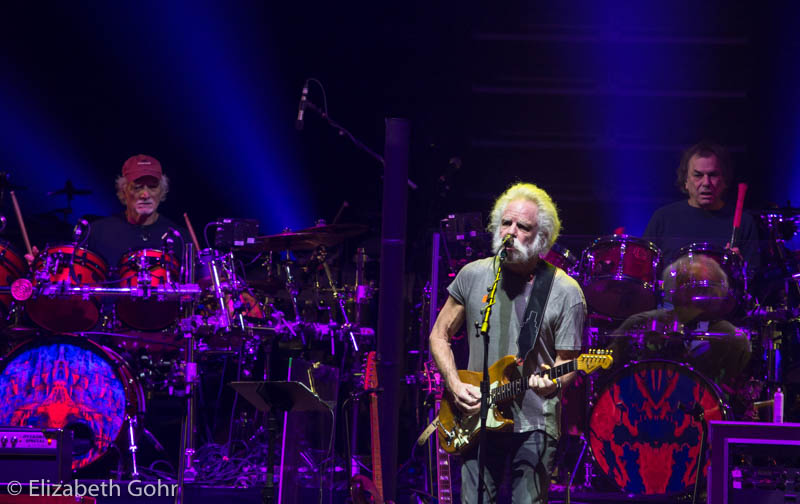 The holiday treat they got was the first ever live performance by Dead & Company of Bob Dylan’s ‘Quinn the Eskimo (The Mighty Quinn).’ It was as if a hootenanny had taken over the Chase Center with fans dancing arm in arm and spinning in circles. 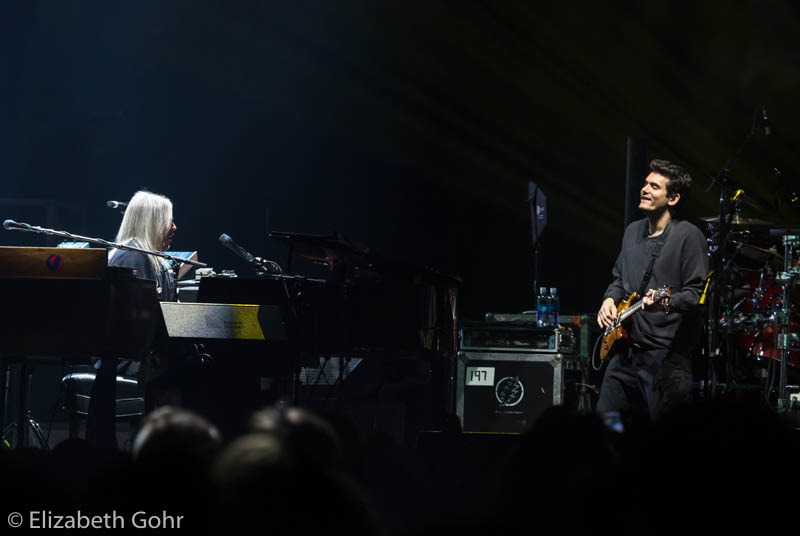