The many bands who have one word names that end in -er (Duster, Provoker, Pardoner ) have got me thinking in verbs. I’m not thinking about toner as in the skin cream nor the ink, instead the action as something that tones. To tone like to strengthen or to alter a color. In May, Smoking Room, an Oakland record label, re-pressed (not repressed) Toner’s 2020 album Silk Road on colorful neon vinyl. The album is short, clocking in at 20 minutes, but nonetheless still powerful.

The band, self-described as noise pop, slowcore, punk, and alternative rock, invite listeners into the warm, dreamy milieu of Silk Road with the opener “‘95 Slow.” From there, noisy interludes divide melodic tunes soaked in a fuzzy texture that makes me think it was in between a dream and a memory. The song “Heaven’s Blade” shows how their music is movingly cheerful yet, somehow, regretfully downcast.

On the album, Toner’s drums embody the verb “to carry.” They are solidly urgent, always on time, never unsteady, as during the intro of “B.C. Hope.” They press on the band, bearing its dreamy weight. The bass takes on the verb “to hold.” In one sense, it holds the insistent drums together with the otherworldly guitars, who sound like they desire to be elsewhere. The guitars– oh! The guitars. Powered by effects and 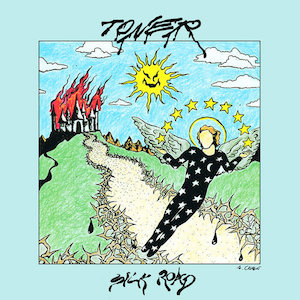 pedals, the guitars capture the verbs to glimmer, to shimmer, to glisten, to burst. They fluctuate between pounding noise and bubbling melodies, from echoing catharsis to smoggy distress. As exemplified on “Dark Ecstasy,” the guitars give Toner a dreamy, otherworldly, faint quality. Like they existed but maybe not here and maybe not now. While the guitars’ otherworldliness puts them in the spiritual realm, the bass and drums occupy the realm of the physical. These two, who make up the rhythm section, are real, worldly, and unrelenting. Silk Road is a collaboration of worlds. Guitars, from up above in the spiritual, meld with the earthly drums and bass of the physical world. Somewhere between these two worlds is the vocals. The vocals are humble, lacking technical prowess, quietly not yelling, almost talking, yet still moving and powerful. To soothe is the verb that the vocals embody. They come with a humility and a truthfulness. Existing in the in-between, they embrace an experiential realness from the physical world and a soaking of dreaminess from the spiritual. Soothingly, they are both.

The many verbs that Silk Road captures make it feel like a memory, but maybe it was a dream. Get a copy of the newly toned vinyl and experience it for yourself.

Oliver Kogod is a San Francisco native whose life revolves around music. He tries to fill his time with music related actions— writing, listening, reflecting, creating, sharing, performing, dancing. Hearing the Ramones as a teenager changed his life, and he is always looking forward to uncovering his next life-changing band.