Everyone in the music world is hurting now. Musicians not touring, not getting together in the studio to work on new material, not working out new songs in crowded rehearsal rooms. And venues are closing at record rates. SF Sonic has been talking with lots of musicians about how they are dealing with the disaster that the pandemic has caused, and now we are telling the stories of musicians from San Francisco about what it’s like. This is the fourth installment in this series, so read about what they’re doing, listen to some music, buy some merch.

What plans did you have in place when the lockdown first hit? Did you have any live shows scheduled or planning to go on tour?

Yeah, Vio-Lence had a bunch of shows where we were going to be playing all over the world. We were supposed to do a tour in Germany, the U.K., and through France. We also had shows in Chicago and North Carolina, were going to play the Maryland Deathfest, the Quebec Deathfest and all these cool little festivals. We were also supposed to play in South America, we had a lot of stuff going. Plus I had lots of cool stuff going as well. I was supposed to play in this Raiders/Fred Biletnikoff Hall of Fame golf tournament, and an Alice Cooper golf tournament and then jam with him. I also had some BPMD that we were going to do, and were going to play a couple of record release shows, one in New Jersey and one over here. Yeah, that was a bummer.

I’ve been doing a lot of these “Collab-A-Jams” with artists that I know and have reached out to, and have done some really cool ones playing on some songs that I’ve really enjoyed with top tier talent. It’s been really cool jamming with Graham Bonnet, Lizzy Hale, Dave Lombardo, and members of Alice In Chains, Judas Priest, and Rancid with all these crazy combinations that I’m throwing together. It’s also been a lot of fun seeing it all come together. I’m also writing the Vio-Lence EP that we signed on to do with Metal Blade, and getting in a lot of practice on new songs, which has also been pretty cool.

Yeah, besides the Collab-A-Jams I go live on my social media and jam sometimes, or if I’m working on a new project, I’ll let the fans listen to the recording, or just go live from the Vio-Lence room. Just trying to stay active on my Instagram.

It’s hard to tell what’s going to happen, and I think anybody is just guessing at this point. People like to predict, but nobody knows, so I’m not going to predict anything. I also own a bar in Dublin called the Back Lounge, and we’re just rolling with the punches. We’re at the mercy of what people deem is OK. Apparently serving a beer with fries or a burger is OK, but just serving a beer isn’t OK. I just want people to figure it out, and until then we’ll wait it out until people can do it safe.

The new Vio-Lence is coming out. I’ve also been writing some music with Dave McClain and Dave Ellefson that’s in the can. It’s been kind of dormant for a bit because Ellefson has been busy with Megadeth, but we’ve got something on hold. I may also be writing with five other dudes I’ve done the Collab-A-Jams with who are some pretty awesome musicians. I’m kind of running the gamut here and spreading myself thin, but I’m having a lot of fun.

Find out more about Vio-Lence here. 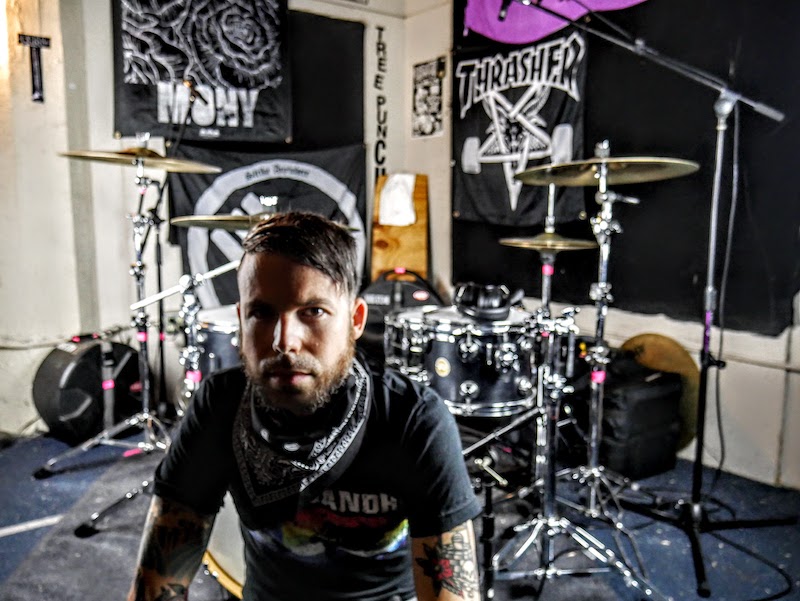 What plans did you have in place when the lockdown first hit? Did you have any live shows scheduled or planning to go on tour?

Yeah, tons of plans! War Bison was supposed to have a show at Thee Parkside, one of our favorite venues in the city, we’d been waiting for this show for a long time and a few days after that show we were supposed to go in the studio and start recording our next release. With my other band, Civil War Rust, we were supposed to go on a tour and play La Escalera fest in San Diego and Mexico and later play a bunch of local shows around the bay area. Everything got cancelled.

As a dummer it’s not easy, I don’t write music and I can’t really “perform online” so I had to get creative, I started recording and filming drum covers and uploaded them to YouTube. It started as something super casual but I actually started enjoying making those (I mean, how can you not enjoy covering Phill Collins & Bad Religion in the same day?!) So I do that, I also track drums and do studio session work at ModernTone Studios in Lafayette for local bands and artists that need a drummer. Have you ever tried tracking drums while wearing a mask? Not easy!

We all try to support the local businesses we either work at, hang out at, gett tattooed at or play shows at. Some of them have active GoFundme campaigns or sell merch so we try to help promote those.

Well, two things I can say in certainty: First, during these past few months people got angry, upset, and anxious (for multiple reasons),  feelings that are typically really good for creating new music, so I’m hoping a lot of new bands and new music would start popping out… Second, people are thirsty for live music, they miss seeing shows and supporting the music scene, I’m hoping that by the time things will go back to “normal” the shows and venues will be packed like never before! I’m just hoping our favorite venues will power through this storm.