The Album Leaf
The Independent
December 16, 2016

The Album Leaf, the solo project-turned-band created by multi-instrumentalist Jimmy Lavalle brought it’s soft-spoken but compelling sound to a sold out crowd at The Independent in SF. On record, The Album Leaf is a lush, understated blend of electronic beats and textures entwined with guitars, horns, strings and other live instruments. With the live ensemble, the electronics take a more subtle position and the organic instruments take center stage. Combined with beautiful and textured visuals projected onto hanging fabric behind and above the band, an altogether singular audio/visual space unfolded.

One year after forming the influential San Diego instrumental group Tristeza, songwriter & multi-instrumentalist Jimmy LaValle founded The Album Leaf, a solo studio project turned full-fledged live band. The diversity of The Album Leaf’s music is inspired by a great diversity of musicians and artists, and it’s clear that The Album Leaf is unafraid of thinking outside the box, both as an individual artist & within the larger scope of modern music. Their latest release (and first for Relapse Records), entitled Between Waves, is their first record written primarily as a group, and was completely recorded and produced by the band themselves. 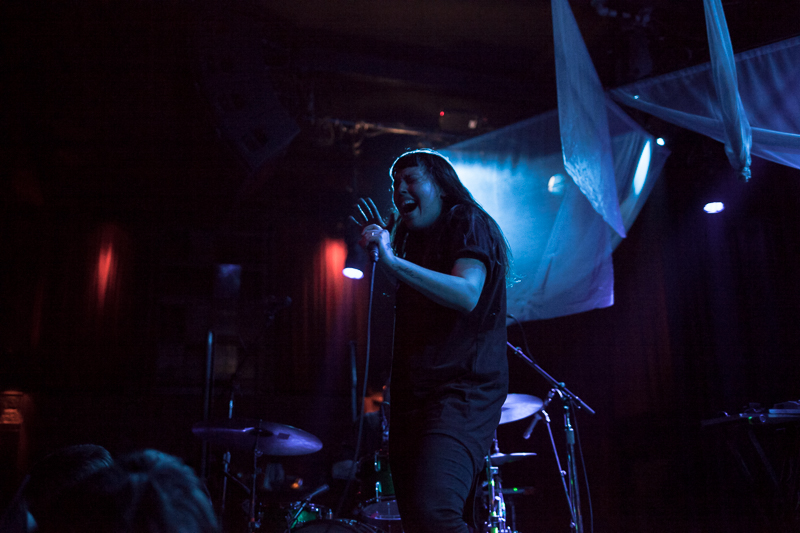 Show openers and tour-mates Rituals Of Mine clearly had a large section of enthusiastic fans who’d come to see them specifically. With the words “Ghost Ship” drawn on the outside of vocalist Terra Lopez’s arm, she spoke to how much the Bay Area means to her and them, and how much we all need each other during difficult times. Lopez’s voice can be fierce and powerful, but also maintains a beauty and subtlety that pulls on the heartstrings and demands your attention. Energetic and engaging, Lopez paced back and forth, breathing new life into each song with the help of drummer Adam Pierce and keyboardist/co-founder Dani Fernandez. Fresh off an early Fall tour opening for Deftones, Rituals of Mine (formerly known as Sister Crayon) are promoting their first full-length album for Warner Brothers, Devoted, and giving more than sufficient bolstering of their ambition and talent.

Here’s a slideshow of photos of The Album Leaf by Bobby Cochran:

Setlist: False Dawn | Glimmering Lights | New Soul | Window | Falling from the Sun | Descent | Back to the Start | Forever Drive | Never Far | TwentyTwoFourteen | Brennivin | The Outer Banks | Lost in the Fog | Between Waves | The Light | | Always For You

For more information about The Album Leaf, check out their website.
Rituals of Mine:

Find out more about Rituals of Mine here.