Afanyala
Maylee Todd
From Acts of Love
DO RIGHT! MUSIC

Even the small, restrained gestures made by Maylee Todd in the “surreal wearable art” costume she exhibits in the “Afanyala” video can’t disguise one glaring fact. This Toronto singer-songwriter and multi-instrumentalist of Filipino descent wrote, produced, and sang one of the best Sade songs that was never made.  Acts of Love, her 17-track stripped down and synth-based alternative soul statement from 2017, 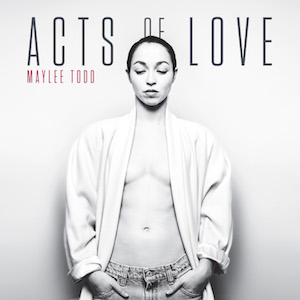 nonchalantly flew under the radar. Truly a detriment to the less informed. Where else last year could you get a female producer constructing her own funk-ballads, 80’s revisionist soul-pop, and synth experimentations without filler?

Sure. Keep gazing at her resemblance to the British high priestess of barefoot presence. It’s upon the realization that Todd “chose” to make a much more accessible record, that the comparisons make a slow fade.  Maylee wholly embraced technology in making what she calls “a bedroom record.” Taking on the role of producer and arranger while recording and playing the bulk of the music in her home studio. This “headphone expedition” of a record, that took a full winter for the Toronto artist to learn new software recording tricks for, …Is a testament to the limitless possibilities one can manifest.

Watch the video of “Afanya” by Maylee Todd: