Let’s set the record straight: this is as close as we are going to get to a new Rage Against the Machine album. There is no way to get around comparing this self-titled release from the Prophets of Rage, a band that features 3 members of RATM, with that band’s original output. This record is a solid piece of blistering rap-rock from some of the most well-regarded musicians and lyricists out there, though it does fall short of the classic material from RATM, Cypress Hill, and Public Enemy.

Prophets of Rage are a supergroup consisting of Tom Morello (guitar), Brad Wilk (drums), Tim Commerford (bass), DJ Lord, with Chuck D and B Real handling rapping duties. Brendan O’Brien handled production on this record and as usual it sounds great, with the drums sounding particularly snappy and clear. While O’Brien has certainly given the Prophets of Rage a clear and crisp sound, one can’t help but want a little more grit and distortion, as the whole record seems to play it too safe. 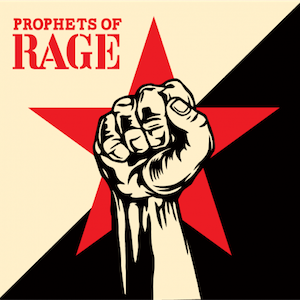 On the album’s twelve tracks, the Prophets of Rage rely on the same bludgeoning attack that made Rage Against the Machine superstars in the 90’s, with Morello’s guitar acrobatics dominating the record. Lyrically, Chuck D and B Real focus their tirades on the current state of political affairs in America, a tactic which works best on songs such as the fiery lead single “Unfuck the World” and the bulldozing riff rock of “Hail to the Chief” but falls short on many of the other tracks. While Wilk and Commerford are dialed in throughout, giving each song plenty of groove and menacing swagger, many of Morello’s guitar parts feel like retreads of his classic style.

Again, there are a couple of songs that really stand out and show that this fusion can work well but there are also plenty of moments on this album where their grandiose political statements and call to action fall short, such as on the clunky funk-rap of “Take Me Higher.”

Overall this is a solid release but therein lies the problem: with the assembled musicians in this band, you’re expecting them to conjure up the same kind of magic from their other bands, and when they don’t, you’re left with a strange sense of disappointment. It’s not that Prophets of Rage is a bad record, it just doesn’t really compare to classic RATM or Cypress Hill or Public Enemy. One can certainly wonder what direction these songs would have taken if the reclusive Zach de la Rocha had signed on for a full-fledged RATM reunion, but as it stands now this is a solid record with a couple of standout rockers, and a couple of duds. It’s enjoyable for sure, but anyone looking for another It Takes a Nation of Millions to Hold Us Back or The Battle of Los Angeles is going to wind up disappointed.