Fearsome thrash quintet Lamb of God (LOG) explores a different side of their sonic personality on their latest release, an extended play dedicated to their longtime friend and fan Wayne Ford. The set comprises two new tracks along with three live tracks recorded during their most recent tour.

The first track, “The Duke,” shows a very different side of vocalist Randy Blythe, who is normally known for 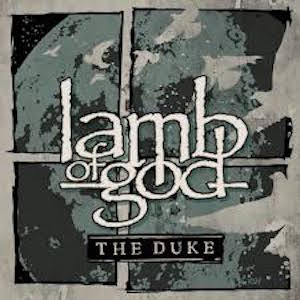 his harsh and caustic vocal delivery. On this song he uses a clean vocal style for the majority of the runtime, providing a perfect counterbalance to the pummeling guitars of Mark Morton and Willie Adler. Though the guitar tandem also use some more delicate sounding pieces in this song, refraining from their traditional ragged attack in certain parts of the song. In the choruses of the song there is excellent use of vocal multi-tracking between clean singing and screaming, giving the song plenty of edge and bit while also sounding fresh and new. Blythe has gone on record before about how he wants to evolve as a vocalist and begin to move away from the throat shredding delivery he has become famous for. Here on the Duke, one sees this concept coming to fruition.

The next song, “Culling,” is a more straightforward track that relies heavily on Chris Adler’s powerful drumming and John Campbell’s steady bass. In classic LOG style, the song is rhythmically complex with plenty of aggressive guitar playing along with Blythe’s skin-peeling vocal delivery.

The next three songs are all pulled from a few live performances and they demonstrate how capable and powerful LOG is in a concert setting. Each song is from their most recent full length album VII: Sturm und Drang with the ferocious “Still Echoes” standing out the most amongst the three. While these tracks may not greatly differ from their studio counterparts, they are flowing with energy and dynamic range and serve as a perfect complement to the two studio tracks.

In short, The Duke EP provides a chance for Lamb of God to grow as a band, expanding their sound in different directions all while maintaining their core elements. It also succeeds in being a great tribute to the band’s fallen friend, one that Wayne Ford himself would be really proud of.