There’s always a harmony waiting to be released. You hear it all the time. Those who have never touched an instrument can whistle a tune to their delight, easily, without any musical prowess. This proves we have a certain connection to music be it spiritual or not. It’s up to you. However, someone like Julian Borrego, a multi-instrumentalist from California, sees something more fluid, a journey he must conquer.

You may have never heard of Bob Bain, but you most certainly have heard his guitar strumming alongside Frank Sinatra and Quincy Jones. Bain is the musician’s grandfather. Really, music runs deep in Borrego and he’s not letting go anytime soon. I first saw Borrego in one of his musical adventures performing as Paisano (a word meaning “homie” for Latinos, essentially), along with Yoel Bibas and Luis Mayorga. Their “psychedeliquatica” sound filled a room with enough psych rock and bubbly funk that you couldn’t help but shake your hips to. Paisano may very well be dormant, but Borrego was quick to continue writing, playing, mixing, and recording. 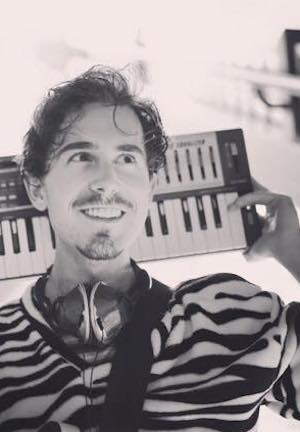 His new EP Ouroboros is a tight, 25-minute dive into what Paisano was originally cooking on their releases. It opens with a track so full of sunshine you may have missed yourself getting burned. “A big car but your cock’s small/Looks like you need those/Car honks/To tell you they love you,” he sings on “Small Talk.” But while Borrego is laughing at the guy with the huge Ford truck, his mind creeps back into itself, revealing another side altogether – “All of these fears of mine/Of years and of passing time/Of one and one making lives/To wake and hear babies cry.”

On “Weekdaze,” the mundanity of 21st-century living is trapped in a song that sounds like a lost artifact from Parliament’s Mothership Connection. “Five days of the week/Staring at the screen has got me/Feeling bleak/Waiting for the day/When the weather gets better.” By the end of the track, a blistering wall of instruments closes you in and swallows you whole.

Borrego sings in his upper register, giving his songs a clear sheen atop the bundle of sounds he carries. “Mbuti/Devotion to the Rainforest” is the EP’s only instrumental. Earlier in the album, we were in the streets. Now, Borrego takes us to a retro futuristic jungle that exists only in an Atari game. It’s an instrumental something a Kodak To Graph or a Bonobo would conjure.

This is not the beginning for Borrego. He’s not dipping his toes in music, but rather, he takes a plunge into it again. The Ouroboros EP continues Borrego’s path into the genre blending that Paisano always craved. But is the artist eating himself alive doing it? Or is it a sign that his passion is infinite? We’ll have to find out next time.

Watch the video for “Small Talk” by Julian Borrego: