With “Drug Tax,” New York quartet Fruit & Flowers brings an eclectic, explosive collection of dreamy indie-punk tracks for a debut EP that demands to be heard. The self-described “surf noir” band offers up a refreshing new sound, one that is without adequate comparison. Caroline Yoder’s lead vocals weave frantic energy with haunting, sultry tones, yet central to the distinct sound are the group’s three-piece harmonies. Lead guitarist Ana Becker and rhythm guitarist Lyzi Wakefield accompany Yoder’s vocals throughout the six-song collection, elevating the band’s sound with an expressive, haunting tone. 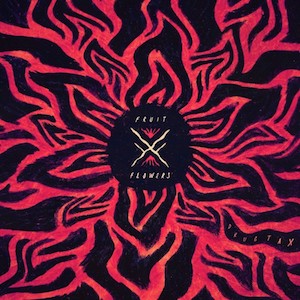 the highlights of the twenty-minute EP. Yoder’s vocals shine, dripping with commanding richness, which is only accentuated by her bandmates’ harmonies at the swell of the chorus. Reminiscent of The Runaways and In The Valley Below, “Out of Touch” packs an impressive array of compositional skill and lyrical charm.

“Pick Fairy” is a groovy punk earworm, backed by a creeping vocals and crescendo-ing into a wailing guitar solo. “It was the best of times, it was the worst of times,” Yoder laments against the gritty guitar riff. The song tapers into a final, eerie harmony, a testament to the darker, moody tones that waft through the album.

“Drug Tax” defies comparison, undoubtedly one of the elements that make it so much fun. Infusing an indie-punk backdrop with dreamy psychedelic vibes, Fruit & Flowers have forged a distinct, highly evocative sound, one that is of exclusive parties in hazy beach bars attended by unfairly cool patrons. A sound you want to be a part of.

“Drug Tax” drops at the end of the month ahead of a short tour for the New York band. As of this summer, Fruit & Flowers will only be expanding their live shows the East Coast. For now, West Coast audiences will have to be content with the strange and beautiful sounds of Fruit & Flowers’ small EP collection until the band makes the trek out to the Bay. And if the irresistible “Drug Tax” is any indication, it won’t be long at all.