We Care a Lot
Faith No More
Koolarrow Records

Legendary alternative group Faith No More have reissued their debut album on bassists Billy Gould’s Koolarrow records imprint. The original album has been out of print for about twenty years so this updated version is a great way for fans to get reintroduced to the origins of the band’s incredibly unique style. The record has been remastered from the original source tapes and includes a hefty amount of bonus material such as new remixes, demos, 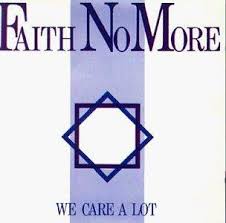 and live tracks from that era making for a 19 song track list. This was one of two albums recorded with original lead singer Chuck Mosley, who brings a different sonic sensibility than current front man Mike Patton. His vocal style is much more abrasive and with less range than what most fans would expect. That does not mean his singing on the record is unwelcome; it merely takes some getting used to for those listeners who are more familiar with later material. Drummer Mike Bordin and bassist Gould sound excellent on here, with their rhythmically varied and dynamic interplay hinting at the greatness to come. Throw in the metal riffage of guitarist Jim Martin and the always intriguing keyboards of Roddy Bottom and you have one unique sounding band. Even at this early point in time it is hard to categorize their sound as it draws equally on metal, funk, and synth-pop to create its sonic identity.

The record opens up with the legendary title track, with its classic chorus refrain and its political lyrics, which really establishes what the band is all about from the get go, along with the pounding, funky drums and bass mixed with chilled out washes of keyboards and precise guitar playing.

Aside from the Red Hot Chili Peppers, there was not any other rock band at this time in the 80s that was experimenting with a similar combination of music genres, which makes the remainder of the record a treat to listen to. One of the main highlights comes in the form of “Why Do You Bother,” a mid-tempo romp that also ends up being the longest track on the record, featuring a particularly nasty vocal performance from Mosely along with thumping bass from Gould. Right after that comes another impressive song, “Greed,” which manages to sustain a lively swing beat throughout, again featuring some exquisite bass from Gould, managing to meld hard driving funk with prog-rock. While all members of the band stand out, it’s hard to not focus in on Gould’s immense chops as a bassist. He runs wild all over the album and is mixed much more upfront than most rock bassists typically are. Towards the end of the original album is the driving metal of “As the Worm Turns,” a song that would eventually be rerecorded with Mike Patton on lead vocals a few years later, in all of its original glory. Alternating between grinding metal guitars and cheesy 80s synth lines, the song manages to keep the listener engaged throughout its duration.

A few songs later and the regular album finishes, which leads directly into the bonus tracks: 3 new remixes, 4 original demos, and 2 live tracks. The new mixes of “We Care a Lot,” “Pills for Breakfast,” and “As the Worm Turns” sound great but they don’t really add anything new to what were already great songs. There is some additional low end to the bass and more crispness to the guitar but overall it’s not a dramatic improvement over the originals. The demos give an interesting look into the band’s history as these same demos were good enough to get them signed to a record label to record this album. Sound-wise, they aren’t all that much different than their album counterparts aside from being a bit more aggressive. It’s interesting to hear that the band sounded so good at such an early point in their career and you can see why these demos put them on the map and got them a record contact. The final two tracks are live recordings that suffer from sub-par recording quality and don’t give you an accurate representation of how formidable of a live unit this band was at that point in time. While it is still nice to have these tracks tacked on to the end of the record they don’t really add anything, other than satisfy the desires of hardcore fans that want every piece of the band’s output.

Overall this is a fantastic reissue and its one that is done the right way: with a remaster along with plenty of bonus tracks to incentivize fans and celebrate the starting point of one of rock’s most unique sounding bands. There are plenty of solid tracks on this record that warrant multiple listening. This album is a must for any fan of the band or people looking for something a bit different than what they typically listen to.