In the hands of inferior talent or unseasoned musical chops, the prospect of constructing an eleven track “début” release that encompasses seriously deep jazz-fusion, “progressive soul,” R&B, and pop…well it could have some structural issues. Just for starters.

Ronald Bruner Jr, who at a very young age participated in jam sessions with Stanley Clarke, George Duke, Kenny Garrett, and Wayne Shorter, showcases his precise comprehension of the aforementioned genres by delivering all the complex sides to his musical being on Triumph. It’s a welcoming multi-hybrid jazz fusion record, that remains unapologetic for an adventurous spirit. Parts of this record were created at the infamous KSL Sessions that produced Kamasi Washington’s The Epic and many other West Coast Get Down recordings.

The Grammy award-winning drummer, composer, arranger, and singer has stated how his relationship with the late great George Duke supported the idea of not being so precious about recording within one musical genre. So when Duke appears on the instrumental funk-fusion “Geome Deome” and delivers a savage keytar solo, Bruner answers the call by supplying a “run through your face over and over” bass drum sustained performance……with Thundercat, Bruner’s younger brother, contributing on bass to the face-melting rhythm section. Yeah, this is a serious affair. 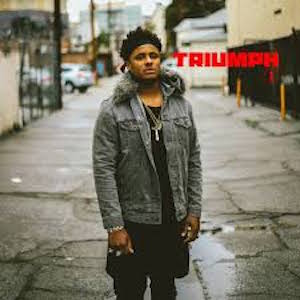 There are several impressive vocal performances from Bruner that never find him extending beyond range. From the uptempo “Sensation” featuring Mac Miller and Danielle Withers, the Princely sounding breezy R&B jaunt of “She’ll Never Change,” or the upfront aggressive soul of “Take The Time,” which features Thundercat supporting on bass and vocals, a blistering guitar solo from Charles Altura and Kamasi Washington providing swelling saxophone voicing near the end. “Doesn’t Matter” possesses a syncopated drum pattern that electronic music enthusiasts would call “broken beat,” sees Bruner and Taylor “Dov” Graves vocalizing to a future soul composition.

While “Chicks Web” and “Open The Gate” present Bruner in his most talented role of bandleader and jazz drummer extraordinaire, sometimes those sessions run just a minute too long. But they do give incentive to go see this performer live and eagerly await future releases.

Listen to “Take the Time” by Ronald Bruner Jr: