In the Autumn of 2008, trombonist Ryan Porter crammed 11 of his fellow Los Angeles jazz musician brethren, mostly consisting of the West Coast Get Down, into Kamasi Washington’s parents’ garage. These humble recording sessions, captured in the broiling and claustrophobic “Shack” in Inglewood under the LAX landing strip, silently demanded perfection. For it was so hot, everyone was afraid to make a mistake which would force a restart. “Obamanomics,” a charismatically uplifting funk strut that allows several members of the cipher to introduce themselves round-robin style via boisterous and confident solos, was the first song written for these sessions. Bassist Miles Mosely delivers the coldest dribbling descent run in the background, giving the selection attitude and gravitas. The song’s swinging chorus emerged from Porters ideas on how to make certain chord progressions and melodies appeal to his peers. A post hip-hop aggregate. Yet the guts of the piece were rooted in the wave of HOPE he immediately felt upon first hearing a man of his skin tone speak of change so gallantly in pursuit of the Presidency. “It was just The West Coast Get Down in a full state of Optimism, recording in late September of 2008, with hopes for something better,” reflected Porter.

Welcome to The Optimist. A document, of boundless momentum, provided by LA’s most revered jazz collective from ten years ago. All 11 tracks come meticulously wrapped in the harmony of sound, giving of spirit and doggedly focused on cultural inclusivity. Porter has made it known repeatedly that he grew up on hip-hop, gangsta rap, ’70s soul, funk, and R&B. The Optimist infuses these genres of Black America to bring jazz where its people live.

So you can get the immediate neck-snapping validation found in “The Instrumental Hip-Hoppa.” A brassy 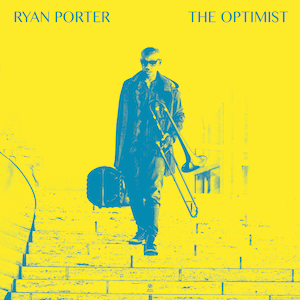 bottom-heavy shout out to shake off the blues by dancing the night away, rejoicing in a “LIT” moment. It’s the album’s best display of how thick and welcoming the horn section of WCGD can be when they play in unison. And pushes a significant point further. Miles Davis started his career playing in jazz clubs and ended it performing at outdoor rock and funk festivals. The art form was never supposed to just stay stagnant. So with that idea in mind, these eleven songs act as inspirational gifts… Urging. Welcoming bright young minds to bring their ideas, samplers and 808s to the jazz table. Where there should always be plenty of room to eat. If you need proof of this success, witness the “real-time” moment that UK Jazz is experiencing RIGHT now in 2018. It would be foolish to not acknowledge the social and musical implications of the WCGD and their collaborations with Kendrick Lamar. And the fire they added to the already flammable Kamasi Washington. The success of his jaw-dropping “The Epic” forced the global jazz community to reconsider some things. Quickly.

Without “The Optimist” sessions, the previous three actions probably do not happen.

So it is no surprise to hear the genteel handling of the Dionne Warwick quiet storm staple “Déjà vu.” Treated here with the same love, care, and adoration reserved for a most beloved Auntie. It’s a track that was played ad-infinitum at the hip-hop generations elders homes and always fell on the kids’ ears.

Yes. These selections put the Miles Davis title for jazz as “Social Music” in plain sight for all to comprehend. While conveying a well-needed boost of HOPE… For right now.

The Optimist will be released on World Galaxy  February 23, 2018

Listen to “The Instrumental Hip-Hoppa” by Ryan Porter: