It is safe to say that when Neil Sugarman and Gabriel Roth started Daptone Records in 2001, the economic and artistic environment dedicated to releasing new soul-based music in analog production form was pretty much non-existent. Back to Black, by Amy Winehouse, introduced the masses to the Daptone technique. Winehouse hired Sharon Jones’ backing band, the Dap-Kings, to accompany her in the studio. That release, which sold over 12 million copies worldwide, turned ten years old last week. Yet it was the 12-inch single, “Che Che Cole Makossa” by Antibalas, released on Daptone in June 2003, that caught the ear of the streets and dance floors alike. The depth of the drum hits with the accompanying bass line carried the audio girth of a Mack truck rolling over a stack of Marshall amps, causing DJs to immediately EQ the song down a bit so said sound systems would not crumble. It was that heavyweight analog sound compression that made Daptone a label to check for.

Their most recent release, The Olympians, an elegant and dynamic instrumental soul album, was conceived in a dream by musician and producer Toby Pazner. It was after playing the famous Acropolis in Athens and 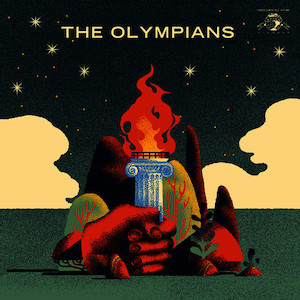 swimming in the Aegean sea that Pazner dreamt he was visited by a “toga-clad curly head figure’ who told him to construct a “Temple of Sound.”

Michael Leonhart, Neal Sugarman, Aaron Johnson and Evan Pazner, who collectively are affiliated with Menahan Street Band, Budos Band, Charles Bradley, Tonight Show Band, The Dap-Kings, The Arcs, Lee Fields, El Michels Affair, Steely Dan, David Byrne, Sugarman 3 and Antibalas. These musicians are a highly interconnected web of professional ninjas, equipped with surgical throwback chops. Think of The Funk Brothers from Motown or the line up from The Wrecking Crew…operating in the difficult and challenging musical distribution system of 2016. An Olympian task by itself.

The eleven track release captures the arrangement nuances of classic soul producers ranging from Willie Mitchell, Leroy Hutson, and Curtis Mayfield to Issac Hayes. It’s an alluring and sanguine look to the past, one that combines lush balladry splendor, polite two-stepper innocence, and fuzzed out guitar hustler paced grooves. It’s those stand-out analog practices that snaps at your inner ear, bringing your subconscious to the surface. Hence, no white noise.

In recent months Daptone has engendered new sounds to the analog touch, with the debut release by The Frightnrs in September, a polished rocksteady gem, and the addition of the subsidiary label Wick handling the rock and roll releases. It’s a great time to be an analog audiophile.

Listen to “Sirens of Jupiter” from The Olympians: