Valerie Poxleitner, aka Lights, returns with her fourth full-length album, the sprawling concept album Skin & Earth. The record’s song cycle is tied into a recently released six-issue set comic book series from Lights, which chronicles the heroine En and her journeys in a post-apocalyptic world. As with any great concept album, the music on here is accessible for everyone, not just those who have picked up a copy of the comic.

Musically speaking, Lights continues her accessible blend of massive pop hooks, bubbling synths, smooth drum machine loops, and guitar into another strong outing. The twelve tracks on here (plus two intro pieces) are as dense and sophisticated as anything Lights has done before, ranging from epic synth-pop to downbeat blues-inflicted ballads.

The opening track “Skydiving” reflects this approach perfectly, blending a slick drum machine beat to a 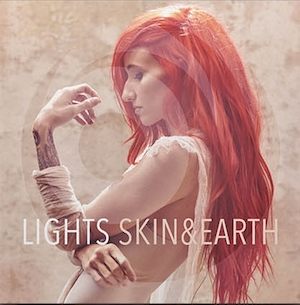 strong set of vocal overdubs and hooks. Lights has perfected the big, bombastic chorus hook, which gives “Skydiving” an anthemic and lasting sound. Another early highlight is the blistering synth-blues rock of “Savage,” which relies on a series of striking guitar riffs and a guest appearance from Josh Dun of Twenty-One Pilots to produce another deep, expansive song that explodes during the choruses only to turn the levels down during the verses, building and releasing tension. Following this is the blues-based balladry of “New Fears,” which works surprisingly well thanks to another strong vocal performance from Lights, who absolutely lets it wail. This type of musical diversity from song to song works incredibly well on Skin & Earth as it holds the listener’s attention the entire time, with each song standing on its own.

While the first half of the record is strong, it’s the second half of the album that stands out as it is packed with memorable after memorable song. Starting with the pumped-up dance anthems of “Kicks” and “Giants” and followed by the catchy dub-synth of “Moonshine,” the songs never let up in catchiness. Following a brief instrumental interlude, the record concludes with a powerful three song flurry in the form of “Magnetic Field,” “Fight Club,” and “Almost Had Me.” “Magnetic Field” is one of the most downbeat points of the record, a slick ballad that rides a superb drum machine beat and plenty of densely layered vocals. “Fight Club” is one of the most upbeat tracks on the album, making excellent use of a strong synth-bass line and another incredibly catchy and memorable chorus.

Finally, the record closes with the fantastic “Almost Had Me,” a hard edge ballad with a deep set of lyrics concerning betrayal, which leaves a melancholy taste. This gives the album a sense of resolution and finality, ending things on a cinematic and emotional level. The song is yet another demonstration of Light’s maturity as a songwriter on Skin & Earth. While on the surface the album is filled with plenty of catchy and upbeat songs, “Almost Had Me” is the exact opposite and it’s the perfect way to close things out.

On Skin & Earth Lights has delivered another impressive album in an already excellent discography, one that continues her sonic and thematic exploration and is one of the stronger releases of this year.