Ramona Gonzalez and Damon Riddick, collectively know as Nite-Funk, authenticated their time spent working with other record labels on previous projects, eliminating them in 2016. Both of these Los Angeles-based musicians, skilled producers in their own right yet intelligently picky when collaborating with others, felt that their individual projects needed a return to an unfettered, singular sound.

Gonzalez, who performs and records under the name Nite-Jewel, just last month released her third full-length release on her own Gloriette Records imprint. The album title, “Liquid Cool,” was also a term she used to describe the sound of the nine-track record. Coiling keyboard vibes that channel early Gary Numan and Orchestral Manoeuvres in the Dark, it’s left-field pop that circles back to her musical identity. 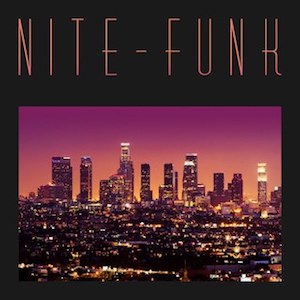 The fact is that the same Nite-Jewel who presents an ebullient stance on her recent single “Kiss The Screen” can posture the correct “done deal” aura in an assertive matter of fact whisper on “Don’t Play Games.” It’s a testament to the keyboard atmospherics and bass line movement enmeshed in the track. This “call and response” shorthand, one that can’t be taught, has been taking place between these artists for seven years. Nite-Funk has always operated in this established lane of superior R&B musical ideas that showcase the cavernous variety of influences both Dam-Funk and Nite-Jewel inhabit.

So it really should not be a surprise that “Let Me Be Me,” a modern-funk testament or post-disco assertion depending on your frame of reference, is a perfect mixture of infectious bass-line work and 80’s diva R&B vocal hooks. Think more Sharon Redd or early Madonna 12-inch records than Janet Jackson. Moreover, the keyboard charts and blistering keytar solo by Dam-Funk harken back to the anthem “Your The One For Me” by D-Train.

The Nite-Funk EP, digitally released for now on Dam-Funk’s Glydezone imprint last week, pinpoints the two DIY. music veterans, who have a penchant for tapping the best elements from each others musical IQ. With the ballad Love X 2, this production outfit has recreated a Ready For The World type non-top 40 slow jam, while the upbeat airy textures of U Can Make Me is a playful exercise into the electro and house genres. One can only hope that the next Nite-Funk extended release does not take another seven years. But in the meantime, wish that this one eventually sees a vinyl release.