There is a simplistic joy and reverence in Christy Essien’s 1979 song “You Can’t Change a Man.”
Originally released on the Decca label in West Africa, the minimal lo-fi audio goodness is coupled with Essien’s conviction of message about the unfair components of a relationship that may or may not be working. Her memorandum and auditory delivery system must be identified as the precursor and spirit animal to seminal disco-boogie classics “Gimme Your Love” by Sylvia Stripland from 1981 and “I Want To Thank You” by Alicia Meyers from 1983.

With all three selections, there is a magical studio genesis in full effect. That emotion, smarts and economical innovations triples the impact that all the overproduced and obnoxious songs with no feeling, that were wrongly 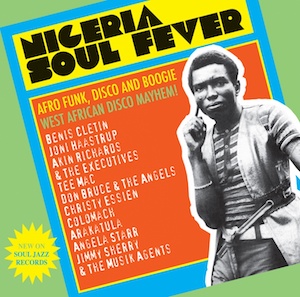 identified as disco from the era… More like a cash grab from major record labels that knew nothing of the culture they soon destroyed. It left a dirty mark and name for the disco/boogie era.

That art vs commerce sitch is similiar to watching a scene from the 1974 Francis Ford Coppola classic film The Conversation build slowly and organically over several tense and difficult yet human minutes. Versus some CGI bloated comic book gross endeavor of a movie today. Just because technology is available does not mean it needs to be used. Essien chooses just guitar, bass, drums, key- boards and possible xylophone to chisel home the sentiment and make it true. Choosing the right tools is just as important as the ten thousand notes Miles Davis chose not to play in his career.

Soul Jazz Records new Nigeria Soul Fever is their first release to explore the immeasurable cornucopia of Nigerian dance music recorded during the 1970s, equipped with detailed sleeve notes by Bill Brewster (author of Last Night A DJ Saved My Life). The 16 track compilation, released on September 9th, is a combination of artists who have seen international attention and those who remained local phenoms.

Producer and artist Tee Mac Omatshola brings the ornate big-band disco cool on “Nam Myoho Renge Kyo.” While the title is known in some circles as a Buddhist chant, Tee Mac’s chart production, proper pacing, and straight ahead strut should be thought of as a Barry White contemporary in the grand elegance and high mindedness treatment that these versions of disco represent.