While it would be easy to assume that a 40th-year celebration of Bob Marley and The Wailers’ Kaya, equipped with colored vinyl pieces, original songs and Stephen “Ragga” Marley’s remixed versions of his father’s hits, is a poorly veiled attempt for yet another mega cash grab for the Marley Estate. Especially when this arrives five years after the 35th-anniversary deluxe edition of Kaya.

These recording sessions took place in London concurrently with the material that ultimately comprised 1977’s Exodus. Kaya was released just one month ahead of Bob Marley & The Wailers headlining the legendary One Love Peace Concert in Kingston, Jamaica. The event featured sixteen of reggae’s biggest acts and was heralded as Marley’s triumphant return to his native soil, following his long exile in London after having fled the country as a result of a December 1976 assassination attempt at his Kingston homestead.

The remixes, which use different iterations from Bob’s voice, fished out of the chum bucket of outtakes and 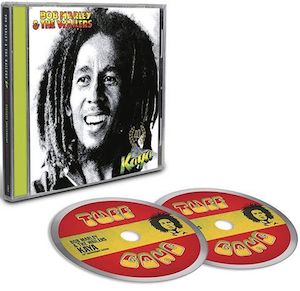 demos-layered over different instrumental arrangements, makes this version less polished and more personal. A bit more adjacent to the slang term meaning of Kaya which is dope.  Recorded with a new configuration of The Wailers, Peter Tosh and Bunny Wailer had left the group, it featured brothers Carlton and Aston “Family Man” Barrett on drums and bass, Tyrone Downie on keyboards, Alvin “Seeco” Patterson on percussion, and the I Threes — Rita Marley, Marcia Griffiths, and Judy Mowatt — on backing vocals, along with newest member Julian aka Junior Marvin on guitar. This superstar line-up shines even brighter in retrospect when their “misreadings’ are deservedly celebrated in the mix.

The selections “Kaya,” “Sun Is Shining,” “Satisfy My Soul,” “Crisis,” and “Running Away” all come across far more plural here. As if Stephen cross-stitched discarded cut tape found on the studio floor to produce the dub/version of these timeless hits.

With the song “Kaya,” certain segments are dropped out to make room for earthy organ parts and whispering vocals from the I Threes at the head of the song. “Sun is Shining,” always a centerpiece for the very skillful rhythm section composed of the Barrett brothers,  finds the guitar pushed out in front of the mix, making the groove undeniable.

Like a classic Robert Altman movie, the ephemera taking place in the background carry just as much or even more weight in support of whatever lyric Bob is delivering high up in the mix. Taking into consideration that a wrong note from “Family Man,” the instinct of Junior Marvin to feel and not read or a vocal ad-lib from ANY of the I Threes will be far more interesting than an over-rehearsed, made for radio airplay delivery.

The changes in Kaya 40 are subtle, but the effects are paramount.