According to Chris Stewart in a recent interview with Observer.com, his early attempts at writing music on his laptop using Garageband resulted in his friends complimenting him on the songs. But not the sounds at his digital disposal. According to his friends, they were “kinda shitty.” Stewart, aka Black Marble, began acquiring old synths that would replace the sub-par synthesizer patch he was using and created a bevy of songs that featured real synthesizers.

It’s Immaterial by Black Marble, released last week on Ghostly International, is an eleven-song dive into synth-pop discovery. The song “Frisk” carries that quick and light, not silly or aloof, brief moment in time where your 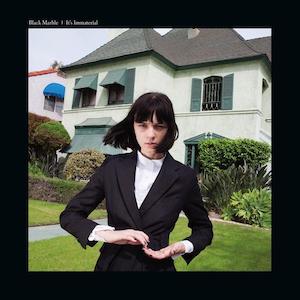 senses are enhanced. And it’s pleasurable. Due to the clean bass lines that go low when the keyboard soars high. It can illuminate that rare unicorn of day at Dolores Park, in the Mission district of San Francisco, when it’s techbro-free.

Its just you, two Tecates and that sweet smoke in the air.

Stewart’s It’s Immaterial freeze frames on specific influences from late 1970’s to early 1980’s punk artists who were starting to use the budding cheap technology of the day that was at their disposal. Less guitar, more keys. Early Cure, Joy Division, and Suicide. First wave of punk artists who choose to go a more keyboard-driven route for their non-pop music compositions. This is not the de rigueur new wave that required fashion first, substance second. Similar to the shows High Maintenance, Atlanta and Better Things, the cream of the crop in fall television for 2016…Black Marble is not trapped by linear conventions for Stewart is more concerned with creating and exploring on vertical terms. Which renders minimal songs and no frills soundscapes that land in the perlieu before fashion first​ new wave.