Renowned Swedish videogame metal band Machinae Supremacy return for another powerful set of epic songs on their latest release, Into the Night World. What sets the band apart from other similar sounding groups (and makes them fit their genre moniker) is their innovative use of the SidStation, a synthesizer module used to compose music for the original Commodore 64 videogame console. This added musical dimension gives many of the songs the familiar digitized sound of classic 80s/90s videogames as well as sets the band apart from their contemporaries.

Of course this would be meaningless if Machinae Supremacy didn’t write incredibly interesting songs, and on this album they really deliver the goods. The album begins with the furious “My Dragons will Decimate,” featuring a creepy SidStation intro befo 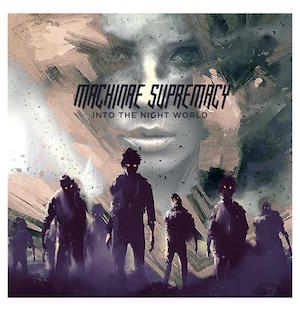 re launching into a strong verse punctuated by powerful vocals of Robert Stjärnström. The high point of the song is undoubtedly the technically demanding and harmonically interesting solo section, featuring Jonas Rörling and Tomi Luoma dishing out some incredible guitar solos and captivating harmonies.

After such a fast start, the band settles into a steady groove on the next few songs before slowing things down for the gorgeous piano ballad “Remember Me.” The piece begins with a delicate piano piece from Andreas Gerdin until drummer Niklas Karvonen queues the rest of the band to come in, driving up the tempo and leading into yet another impressive demonstration of guitar heroics from Rörling and Luoma.

A couple of songs later, the epic “Beast Engine” comes roaring out with a stomping beat punctuated by a rich and catchy series of guitar parts, over which Stjärnström absolutely howls. His true skill lies in the ability to use his vocal prowess to drive home the emotion and drama present in the band’s music, to push things to a whole new level.

The most interesting track on the record may be the instrumental “SID Metal Legacy,” which makes extensive use of the SidStation to create a sonic atmosphere that would feel right at home in an action adventure videogame from the past or the present. This combination of new and old sound templates is the hallmark of this album, and the thing that really seems to separate Machinae Supremacy from their peers.

Finally, the album closes with another gem in the form of “The Last March of the Undead,” which presents an accurate summation of all the bands sounds and their strengths. Featuring great interplay between mournful piano, scorching metal, and SidStation driven electro breakdowns, the song twists and turns through over four minutes with plenty of over the top guitar soloing to placate even the staunchest metal fan. It serves as a perfect way to finish another fun and powerful record from Machinae Supremacy, proving once again that every though the band is now fifteen plus years old, they are a force to be reckoned with in the metal underground.

For more information about Machinae Supremacy, check out their website.

Listen to “My Dragons Will Decimate” from Into the Night World by Machinae Supremacy: