17 years after the release of their generation-defining album Relationship of Command, At the Drive-In return with In·ter a·li·a, a compact and hard hitting collection of songs that shows the newly reunited band is still just as vital and powerful as they were during their heyday. While the loss of founding member Jim Ward prior to the recording sessions is a big loss as his guitar, vocal, and piano work was an important element of the band’s sound, At the Drive in (ATDI) still sounds as vital and overpowering as ever.

The main ingredient to ATDI’s sound is the combination of Cedric Bixler-Zavala’s wailing vocals and Omar Rodriguez-Lopez’s frantic guitar playing. The two have an undeniable chemistry (as evidenced by their spectacular work in The Mars Volta) and they push the rest of the band to their limits as musicians, giving the songs a sense of urgency. In a day in age where so many aging and or reunited rock bands play it safe, it is refreshing to hear ATDI playing with such aplomb, as if they are responding to the decline of rock bands by saying “Hey we’re here, we’re playing, and you can’t ignore us.”

The opener “No Wolf Like the Present” surges and bursts with this frenetic energy, recalling classic ATDI songs from 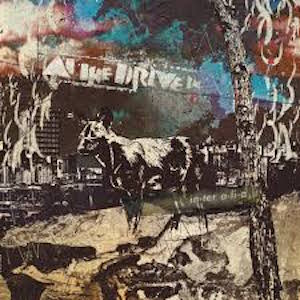 the past while also sounding new and vibrant. The production job of Rich Costey and Rodriguez-Lopez is fantastic – managing to capture the band’s raw energy while also maintaining a clear, crisp sound. What is remarkable after all these years is that ATDI have not dulled their edges at all: their songs still spiral around obscure and esoteric lyrics to complement dense and aggressive songcraft. Their wild enthusiasm also stands out on this recording – you can really get the sense that the core four members (plus new guitarist Keely Davis) really love playing together. The pop sheen of Relationship of Command is gone here, with the sonics of the record recalling Bixler-Zavala’s and Rodriguez-Lopez’s work in Antemasque and Crystal Fairy: combining bracing hardcore with prog-rock.

The centerpiece of In·ter a·li·a is the single “Incurably Innocent,” which equals any of ATDI’s legendary output from their original three records. The song is a throwback to those vintage sounds yet at no point in time does it sound like simply a retread of the past. The track begins with some aggressively strummed guitar before drummer Tony Hajjar enters with a blistering and chaotic drum beat using every part of the drum kit at his disposal before Paul Hinojos comes in with a massive bassline. Bixler-Zavala then comes in with some of his best lyrics of all time: a socially conscious take on speaking out about sexual abuse, wailing over the torrent of guitars, bass and drums. The song then descends into a rousing chorus section that is based around a memorable and mesmerizing guitar figure that perfectly accentuates Bixler-Zavala’s poignant lyrics.

Without Ward, ATDI have left behind some of their more emo elements and instead focused on rocking out as much as possible, and while there are some slower moments on the record, the album has a frenzied feeling to it, making its 41-minute run-time seem much shorter.  While many will undoubtedly try to compare In·ter a·li·a to Relationship of Command, decrying the fact that it doesn’t hold up to the classic status of the latter, on its own this record is exactly what ATDI needed to do at this point in their career: craft a vital and lively set of pounding rock songs. While it may not convert any new fans, In·ter a·li·a stands out as a great piece of rock music and one of the better comeback records ever released.