After two critically acclaimed albums, Pallbearer return for their third opus, the sprawling epic Heartless. Much like their previous work, Heartless combines the epic dirge of classic era Black Sabbath with chilled out space rock. On this release, however, Pallbearer have managed the impressive task of expanding their sound while also retaining their sonic core: mixing experimental prog-rock and cinematic post-rock influences to their musical palate. This record is not for those with short attention spans as each track clocks in at well over five minutes in duration, with the album-closing monolith “A Plea for Understanding” spanning an impressive twelve minutes and forty seconds.

Heartless invokes the sound and feeling of long forgotten metal records from the late 1970s, with winding guitar passages and lumbering drum rhythms that build upon each other, creating a dense yet accessible sound. This 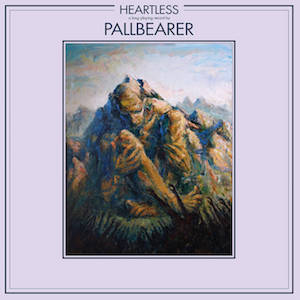 time around guitarists Brett Campbell and Devin Holt have stepped up their musical game, adding in a rich tapestry of lead guitar to complement their thunderous rhythm guitar tag-team. This is particularly evident on the first track (and single) “I Saw the End.” The song begins with a lumbering series of riffs before opening into a gorgeous sounding twin guitar harmony that pushes the song into anthemic and epic territory. Campbell, who also doubles as the lead vocalist, sounds much improved here as he finds his own unique voice that manages to pay homage to Ozzy Osbourne (both in range and timbre) in addition to adding another rich layer to an already deep piece of music. Towards the end of the song there is yet another flurry of spectacular guitar work before a brief yet tasty set of solos. While Campbell and Holt are by no means master technicians, they have become even more adept on this album at crafting solos that add value and emotion to the song, instead of just mindless noodling.

The following song, “Thorns,” continues in this vein, though in a more direct fashion (it’s the shortest track here, a measly 5:24) anchored by a sturdy drum performance by Mark Lierly. A bit after the halfway mark the track breaks into a clean guitar section that recalls both European classical music and sweeping post-rock soundscapes as Campbell and Holt create a gorgeous web of interlocking guitars before kicking the distortion back in to complete the song.

While these two songs are still very indicative of what Pallbearer has done in the past, the next song, the mournful ballad “Lie of Survival” is where the band really begins to expand its sound to new frontiers. Carried by a delicate synth backing along with some particularly inspiring guitar playing, the song twists and turns through its eight-and-a-half-minute runtime, with its gloomy atmospherics reminiscent of a slower version of black metal. What makes the song so impressive is that it can hold and carry the listener’s attention throughout its multi-sectioned composition, without ever feeling too derivative and too boring.

The next track “Dancing in the Madness” (another ballad) is the first mammoth piece on the album, clocking in at a robust 11:47. It mines the same territory as “Lie of Survival” though does so in a much looser, jazzier fashion with Lierly and bassist Joseph D. Rowland locking into an elegant rhythm through the first half of the song. Just when it appears as if “Dancing in the Madness” is going to be a complete retread of “Lie of Survival,” the song gets cut open by a fierce metal break down, with all manner of heavy guitar chugging and shouted vocals from Rowland before a brief and stylish acoustic guitar breakdown takes over. Finally, the track closes out with an inspired guitar duel from Campbell and Holt, some of their most impressive solos on the entire album. Featuring all manner of squealing harmonics and bends, the solos provide the needed harmonic closure befitting such a massive track, and the perfect accompaniment to Campbell’s emotional vocal delivery.

By comparison, the following song “Cruel Road” feels short, almost fast, in its application of stomping metallic fury, with some of the fastest tempos Pallbearer has ever done. Mining a rollicking groove, “Cruel Road” is one of the more straightforward songs on Heartless, with plenty of queasy dissonance and harsh vocals to provide just the right amount of malice after so many (relatively) laid-back songs. However, as has been the case on the entirety of Heartless, the song fits in plenty of mournful and melodic passages to complement the hard charging metal.

The penultimate title track sees Pallbearer accentuating the sounds of the previous five songs, melding loud/quiet dynamics with surging metal anchored by pulsing, booming drumming from Lierly. Campbell’s voice stands out on this track thanks in part to an elaborate and choral bit of vocal multi-tracking. At last, Heartless ends with the dreamy ballad “A Plea for Understanding.” The composition (a fitting term for such a song) begins in typical Pallbearer fashion, with plenty of sludgy metal before breaking into a series of dreamy, echo-drenched guitar lines that recall vintage Pink Floyd. When Campbell finally comes in he is backed by minimal instrumentation, allowing for his soulful vocals to take center stage before the band comes back in for a stunning and powerful chorus. The song continues to build upon itself, drifting between graceful space-rock and crushing metal before closing out with another set of expressive vocals from Campbell, ending the record with a sense of both gloom and beauty.

The overall sound of the album is fantastic: managing to blend classic analog sounds with a few modern flourishes so that it never sounds too dated or too old. Special attention must be given to the wonderful mixing job of Joe Barresi (Tool, Melvins, Queens of the Stone Age, Fu Manchu) who gives Heartless a great sense of dynamic range. In a day and age where it seems as if every recording that comes out is over compressed and mechanical sounding, it is refreshing to hear such a lively mix of instrumentation. Same goes for the mastering job of Dave Collins (Black Sabbath, Alice Cooper, Soundgarden, Sting) who helped refine these sonic qualities, again giving Heartless that unique sound that is both a throwback yet also modern.

What Pallbearer has done here is craft another fantastic piece of metal that expands their sound while retaining the sonic qualities that make them stand out in the metal scene. This is no easy task, and the fact that the band can pull off such a deep and dense record is a true testament to their skill as musicians and as composers. They have managed to craft a transcendent work that will appeal to both metal and non-metal fans alike and is the first great release of 2017.

Listen to “I Saw the End” by Pallbearer: