Brendon Small returns with his first solo release since the ending of the popular Adult Swim show Metalocalypse, Galaktikon II: Become the Storm. Once again Small teamed up with the musicians he recorded the last two Dethklok albums with, drummer Gene Hoglan (Testament, Dark Angel, Fear Factory) and bassist Bryan Beller (Steve Vai, Joe Satriani). Small continues to perfect his blend of metal styles, creating an album that has all the hallmarks of his previous output. As usual Small handled all guitars, vocals, keyboards, orchestrations, and songwriting, with the album containing many of the unique sonic characteristics of his previous work.

What makes Brendon Small such an interesting musician is his combination of pushing heavy metal with sophisticated neo-classical guitar playing. Each song on Become the Storm features a dense web of guitars mixed to create gripping pieces of music.

The opening track “Some Days Are for Dying” encapsulates this perfectly, as winding and technically complex lead guitar passages melt 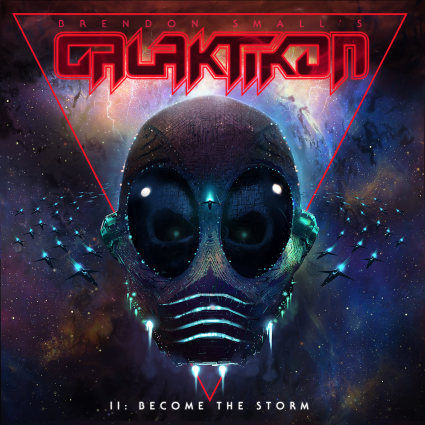 seamlessly with grinding metal. Vocally the song alternates between guttural death metal vocals and clean layered vocals that give the song an operatic quality.

This basic approach is found on the remaining ten tracks, which see Small at his most precise and complex. The production work of Small and Ulrich Wild gives each song the perfect blend of dirtiness and cleanness, with the guitar tone striking a perfect balance, a must have for any metal album. And make no mistake, this is squarely a metal album: for every wild guitar solo and neoclassical breakdown, there is an equivalent of grinding guitars, furious double bass drum work and all out speed burners. Hoglan and Beller make for quite the tandem as they effortlessly handle each composition with a stunning blend of technical mastery.

The centerpiece of the record is the eight minute plus epic “The Ocean Galaktik,” which combines elements from the rest of the album into one massive track. The song is divided into many different sections that range from anthemic arena rock to blistering metal to dense neo-classical pieces. Vocally, the song sees Small using clean vocals throughout, and while he may not have the greatest range as a singer, he knows how to get the most out of his voice.

Another standout track is the closing epic, “Rebuilding a Planet,” which is again anchored by plenty of melodic and catchy guitar work recalling the work of guitar heroes such as Joe Satriani and Steve Vai. The instrumental track moves through plenty of different musical passages, all lead by Small’s lyrical playing. He has a knack for creating memorable and evocative melodic licks on guitar that get lodged in the listener’s head.

Overall Become the Storm is another strong release and shows that Brendon Small is soldering on after the ending of Metalocalypse, creating a solid piece of neo-classically influenced metal that fans will certainly enjoy.