The aptly titled Fusion Swing is the second release from Aaron Koslow on Alpha Pup Records. It’s a meditative…deep dive into the many pathways that experimental hip-hop/electronic music and avant-garde/free jazz from the early 1970’s link up and merge in a very organic fashion. Koslow, who performs and records under the moniker Elusive, documents this concept….a combination used previously by the likes of 4-Hero and Dj Krush, by updating the sonics to work within the present-day cross-pollinating underground hip-hop idiom. The release has received praise from LA vocalist Jimetta Rose and the globally influential Gilles Peterson, while remaining on the KCRW playlist previous to the release.

Koslow, a Los Angeles based electronic music producer, started turning heads in 2010 when he first played at Low End Theory, the epicenter of LA’s instrumental “beat scene.” Koslow, whose latter 90’s production sheet includes collabs with Abstract Rude and Myka 9 from Freestyle Fellowship, has been crafting left of center hip-hop for a minute. That distinct individualist ethos bears its veteran soul with the extensive 17-track release that includes embellishments from saxophone, guitar, upright bass, trumpet, cello, and harp assisting the digital hardware. 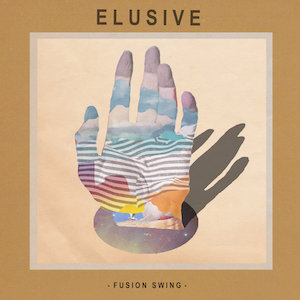 Ramona Gonzalez, who performs and records under the moniker Nite Jewel, collaborates on “Rinse Cycle” by providing her singular hybrid r&b/pop vocal persona. It sheds a more human touch on Koslow’s production. Nite Jewel, a seasoned producer and musician in her own right, will release her next full-length project Real High early in May.

Fusion Swing does have its moments where it sounds like it could be running a bit too long or certain spots feel repetitive and self-referential. But to pull off an engaging and original left-field document, without the aid of a “dance” or “head-nod” single is not that easy of a trick. Granted, anyone searching for regurgitating “bro-step” here needs to grab a Pepsi and bounce.

Elusive successfully concentrates his abilities on prodding rhythms, melodies and off-kilter time signatures in all the compelling directions. Making an illuminating hopeful record that brings some authentic spirit and light to what has been a deceitful and dirty year so far. Alpha Pup continues their winning streak of betting on artists who are reshaping, reinterpreting and pushing the limits of what jazz can be defined as going forward.

Listen to “Too Blue” by Elusive: