At the midpoint of Shochurolling, the fifth song from the new release Funkcronomic by Bernie Worrell, Bill Laswell and Karsh Kale, Worrell resorts to his keyboard voicing of the playful and inquisitive alien. It’s a childlike tone of exploration that has garnered this master of the keyboard praise and recognition for decades. Laswell’s intricate bass work and Karsh Kale’s steady drum push on the track gives Worrell the proper latitude for stretching ideas and color palettes into a full-on galactic ecosystem. 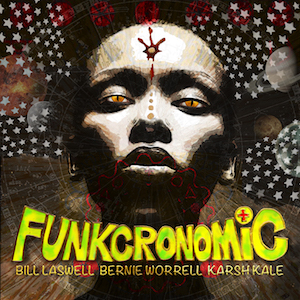 This five song EP, released last week on the M.O.D. Technologies imprint, catches the musicians in a lean, stripped down, power trio stance. Recorded approximately 15 years ago, it serves as a helpful reminder that Worrell, who has influenced and played in two Rock and Roll Hall of Fame Bands, can be an orchestra all by himself. On the track “Flashback,” Worrell runs three different relationships in sound at once. It is as if the id, the ego, and the superego sat down for brunch and sipped on absinthe for an afternoon. These interlocking sounds all exist outside and within the bass and drum framework. Or on “Outer Woo,” he begins with a choral chamber introduction before segueing into the groove with a sideway attack.

These compositions, edited, mixed and mastered by Laswell himself earlier this year, give proper perspective to the flexibility of style — either jazz fusion, classical choral references, or outer stellar acid freeze mode — that Worrell still continues to execute on a dime.

“I met Bernie while working on a record with Nona Hendrix. David Byrne met Bernie around the same time and I stayed in touch with him,” said Laswell in an SFSONIC interview. “Bernie is an intuitive musician. He’s spaced out. He doesn’t really know where he is most of the time, but when he sits down to play, it’s a whole different thing. He’s been like that as long as I’ve known him.”

Worrell, who is currently fighting stage four lung cancer, was the Musical Director for Parliament-Funkadelic in the mid to late 1970’s. Then, in the early 1980’s, he accompanied Talking Heads to strengthen their rhythmic sound and stage presence.

David Byrne credited the keyboard player in shaping his own criterion for composing in a heartfelt statement released on Byrne’s website earlier this year.

“Bernie is classically trained (as well as having perfect pitch-I’ve heard him improvise with the sounds of traffic), so he brought those skills to the Afro-Futurism of the P Funk universe…a bit of keyboard cosmos into the funk chants and beats of that world that made it what it was. I learned a lot from that music, and of course from the time spent traveling and playing with Bernie-wordplay, musical attitude and a lot more. He informed the musician and composer I was to become.”