Whenever someone tries to tell you that Funkadelic is not relevant today...you should point said doubter to the artistic sensibilities of ThunderCat, Flying Lotus, and more recently, Childish Gambino. And then give the directive, “pound sand.”

Funkadelic, the brain child of George Clinton, was the wildest concoction of a punk DIY ethos and rebel attitude

that an all-black rock band had ever showcased in 1971. And possibly still today. While they kindly borrowed from the blues, funk (“the blues sped up” according to Clinton), psychedelic rock, and gospel. The concoction presents itself as this unparalleled “otherness.” A state that is identifiable, but indescribable.

Many years ago when I interviewed George Clinton he described the early years with Funkadelic as very fertile with creativity, but at times too far out for the pedestrian listener to comprehend. Performing sometimes in sheets or just plain naked. “We were too black for white and too white for black.” 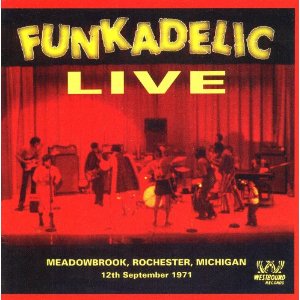 So when you hear Clinton goad, rap, sing, and instruct his band and the crowd on “Good Old Music,” fromthe release, Funkadelic Live – Meadowbrook, Rochester, Michigan – 12 September 1971, it’s a joyous occasion. Eddie Hazel wields his fire and brimstone guitar chops while Bernie Worrell backs him up on organ with his most reserved, yet blue-mood dexterity. Next, without hesitation, Worrell guides the band through a classical musical segue during “I Got a Thing, You Got a Thing, We All Got A Thing,” while keeping everyone and the funk. On the one. Meadowbrook, a ten track time capsule, is the only official in-concert recording from that period. It’s the first time ever to be offered on vinyl. The double LP set, with OBI-strip, was taken directly from the soundboard master tapes.

So Childish Gambino recently embodied the funky prog-rock spirit of Funkadelic with his masterful single, “Me And Yo Moma,” at the end of last year. Complete with Glover blowing and screeching in vintage freak flag Clinton mode over the rock ballad.

“You and Your Folks, Me and My Folks” performed live here comes off either as the spirit animal Gambino was channeling…. or the much needed clammy work out, b-side treatment that we had already been prepared and waiting for.