Funk Factory
Be With Records

Originally released in 1975 as a response to the falsely assumed notion that Eastern European musicians could not come close to touching the funk, a thought briefly held by some American contemporaries at the time, Michal Urbaniak assembled a group of Polish musicians and coupled them with a contemporary American rhythm section of smoking guns, and produced a space-laced jazz fusion album that gained legend and notoriety in the oncoming decades. Funk Factory, just re-issued on 180 gm by Be With Records last month, consisted of Urbaniak on violin, vocalist Urszula Dudziak, Accomplished polish musicians keyboardist Wlodek Gulgowski and singer Bernard Kafka, founder and leader of great Polish vocal group Novi Singers, along with the esteemed American rhythm section of bassists Anthony Jackson and Tony Levin, drummers Steve Gadd and Gerald Brown and guitarist Barry Finnerty and John Abercrombie. 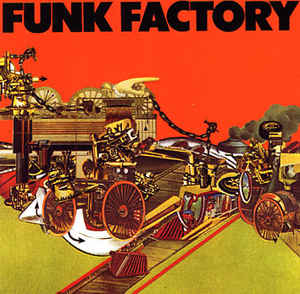 Funk Factory will always be instantly recognized by beat heads and crate diggers worldwide as the source material for the Beastie Boys classic “Car Thief,” from the 1989-produced hip-hop staple Paul’s Boutique. The Dust Brothers hit pay dirt by sampling the stanky break in “Rein Ne Va Plus”. But only a fool would just focus on the sample. The entire song is a sinewy slab of mid-tempo funk with touches of P-Funk, Eddie Hazel rather, filthy keyboard work, and lovely ethereal Labelle-like enhancements coming from the angelic Urszula Dudziak. Fuck the sample, the complete track itself is a beautifully weird spacey gospel testament to the fact that Eastern European musicians could wade, swing, zig, and zag with the best of them in that idiom. At that time.

The hidden gem of realization on Funk Factory is the versatile dexterity that Michal Urbaniak possesses and executes with the jazz violin. He carries on the tradition handed down from jazz legend Hezekiah Leroy Gordon Smith, otherwise know as Stuff Smith. Urbaniak also qualifies as a worthy contemporary of Jean-Luc Ponty. Specifically on the track after All the World Goes Home, Urbaniak gives a solo performance that resides someplace between free form fusion heights of guitarists Larry Coryell and the intricate chart work of Al Di Meola.