This past year, the extravagant psychedelic guitar work of Los Angeles-based musician Ty Segall has appeared on five albums. Yes. This ceviche-obsessed multi-instrumentalist released Freedom’s Goblin in January, an album with GØGGS, and an album with White Fence and put out an EP with his band The CIA — a collaboration with his wife Denee Segall and Cairo Gang’s Emmett Kelly.

Fudge Sandwich, a covers album the former San Francisco-based artist recorded for fun, is kinda like a day-long journey of a vinyl addicted DJ who is constantly digging in the crates, looking for the most popular and obscure versions of classic joints to mess with in the balmiest fashion. Segall, a 31-year-old vet of at least 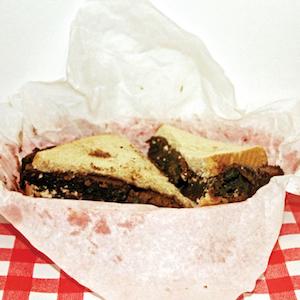 seven bands, does not carry one ounce of that Greta van fleet retro-fetishism stank up in here.  He could give a damn about keeping the oldies wrapped in their dusty first impressions. The vibe here wreaks of “Let the fuckers out” and take them on a joy ride where the wind blows through the grooves. This romp includes songs by Amon Düül II, John Lennon, Sparks, War, Funkadelic, Gong, Rudimentary Peni, The Dils, Grateful Dead, Neil Young, and the Spencer Davis Group.

So when the atomic ballast, in double time form, descends on Neil Young’s ”The Loner,” Segall treats us to a version Young Neil might have concocted if he grew up down the street from 924 Gilman Street in Berkeley, the springboard for the 90s punk revival, during his formative teen years. Segall flips this classic ode to dread and isolation into a call for more attention to paid towards those “young men” hanging on by a thread out there on the fringes of society. Accentuated with a brief but surgical guitar solo to boot.

When we get a punched up fun button garage version of the Spencer Davis Groups’ classic “I’m a Man,” it’s the simple choice of streamlining the tone to a groove delivery system that forces this mechanism shake with damming conviction. Again, the slight adjustment, as opting for more fuzz than crunch on the Funkadelic cover “Hit It And Quit It,” Segall easily recognizes you are not gonna out funk Funkadelic. But redressing the song with rad, grimy shit is the better move.

The moving and direct reading of “Class War,” a 1977 punk rock classic by The Dils is transformed here from a buck forty-three thrash and blaze incineration to a wistful folk song that is just as moving as the original, but this time in a ruminating form. The timeless take on “don’t piss on me and call it rain” sitch directly references our current political climate.