Here in 2016 there is still a nasty double standard that resides in the field of electronic music. The EDM category, which is flush with white male producers waving their hands in the air while playing multi-million dollar festivals around the world, would have you hope that all genders and races of producers, performers and Dj’s could inhabit that space. I mean it only makes sense, right?

EDM being an attenuated derivative of disco, house, soul, jazz, electro and techno. all musical forms originiating from disenfranchised communities that founded their own space, on the fringes. Because there was not a place for them to eat on the Billboard 100 charts years ago.

But now with the corporate takeover of large scale EDM events, it would benefit the music, the consumers, and the “said” culture to represent all that have shaped this one time underground music.

So it is refreshing to see and hear Jennifer Lee, who records, performs and produces under the moniker of TOKiMONSTA, inhabit that space with her recent release Fovere. Lee, a classically trained pianist from 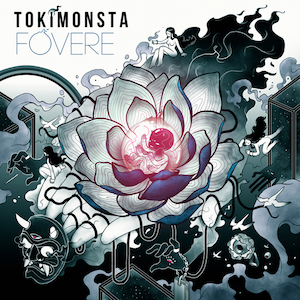 Los Angeles, first started working on beat production while in college when she participated in workshops by Leimert Park’s Project Blowed and Low End Theory. Along the way she became the first female producer to have records released on Flying Lotus’ Brainfeeder imprint.

Now with Fovere, the seven song, 24 minute EP released on Lee’s Young Art imprint , the record packs a serious punch of future pop’s co-existence with hip-hop, electronic music, and trap. Her concoctions blur traditional lines, similar to the way that television and film have formed a new genre of visual entertainment through the streaming platforms on Hulu, Netflix and Amazon.

“Put It Down” featuring Anderson .Paak & Bay Area producer KRNE is that bouncey infectious trap hybrid that just grows in charismatic exuberance with every listen. Or that could just be the vocal ease that .Paak brings to the table every time he works in front of the mic.

“Give it Up”, which features the melodic vocal talents of Jonny Pierce of The Drums, percolates along with grace and warmth. Again, Lee is accurately crisp in delivering a song that resides somewhere between mellow r&b and downtempo business.

The closing selection “Wound Up”, which features Toronto-based vocalist Allie, is by far the most uptempo cut on the record. It would be inaccurate to classify it as a house “banger,” it still bumps quite effectively all the while lyrically dealing with an unfortunate situation.

Listen to “I’m Waiting” from Fovere by Tokimonsta: