After an 8-year Hiatus, Underoath is back with an incredible comeback record, the furious Erase Me. Recorded with super-producer Matt Squire, the album continues the band’s blend of post-hardcore fury and blistering metal, with many of these tracks containing massive walls of guitars and dark synths.

This became apparent from the opening notes of the furious opener “It Has to Start Somewhere.” Anchored by a tight drum performance from Aaron Gillespie, the song alternates between harsh and grinding metal and more anthemic rock. What is most surprising are the tight arrangements in these songs: despite being a relatively short album time-wise, these songs are constructed with so many layers that the record demands repeated listens.

While Underoath has moved away from some of their metalcore tendencies, don’t think for a second that Erase Me isn’t surging with anger and angst. The third track, “On My Teeth,” is a perfect example of this. A sea of rampaging guitar mixes with a slamming drum beat only to turn into a catchy and anthemic chorus, with singer Spencer Chamberlain delivering an impressive set of lyrics. 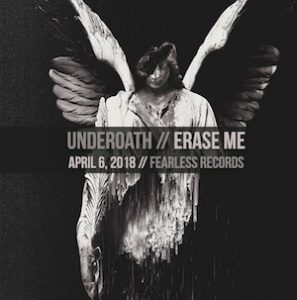 There is an undercurrent of dark foreboding and questioning throughout the record, as if the band is questioning their stance in the world and their belief systems. Before this Underoath was always known as a Christian-leaning band, but on Erase Me they seem to be tearing that façade down, leaving more questions and concerns than answers. Another standout song comes in the form of “Bloodlust.” The song starts off with a delicate keyboard line from Christopher Dudley, before the roaring guitars of James Smith and Timothy McTague for a driving chorus. As previously stated, Erase Me is a deep album that demands repeated listening to decipher all of its complexities.

For example, take the song “ihateit,” a more downbeat track that contains plenty of clean guitar, dark synths, and grinding guitars. While the song is one of the more straightforward anthems, there are so many sonic intricacies going on in the background that they do not become apparent to listeners until hearing the song again and again. For those looking for a more old-school Underoath song, look no further than the rampaging “Hold Your Breath.” Riding a grooving guitar riff and plenty of harsh vocals, the song is one of the fastest on Erase Me and is another showcase for the band’s renewed songwriting acumen. While there are lots of harsh vocals on the song, there are also plenty of high flying clean vocals in the chorus: a perfect balance of the anthemic and the atonal. The closer, “I Gave Up,” is a dreary piano-based ballad, until it gets ripped open by a series of crushing guitar lines, turning up the volume and intensity for the rest of the track.

Underoath has succeeded in updating their sound while retaining their core and Erase Me is an impressively deep record that pushes the band in a new direction. There is a cinematic flair of epicness throughout the album, making it hard to put down. Put it all together, and you have one of the best metal/rock releases of the year.