Enslaved return for their 14th studio album, the monumental and sprawling epic E. The record marks another landmark achievement in the band’s lengthy career: yet another impressive blend of searing black metal, ambient soundscapes, progressive rock and even some jazz.

This marks the first album with new keyboardist and clean vocalist Håkon Vinje who’s presence is felt throughout the recording, providing the perfect contrast to Grutle Kjellson’s guttural growls. Lyrically and thematically the record continues the band’s exploration of the duality of man and nature, and the ancient Viking themes that have won them much critical acclaim in the past.

E contains six lengthy tracks that show the band firing on all cylinders and continuing to expand the progressive elements in their music, as evidenced by the opening track, “Storm Son.” Clocking in at over ten minutes, the song begins with a loud battle cry and horn blaring before going into a clean-toned guitar passage, riding a series of smooth, almost jazzy passages.

Eventually, the distortion kicks in and the band goes into full metal mode, riding a tight groove from drummer Cato Bekkevold while Vinje delivers a set of clean vocals backed by a choral arrangement, contrasted by Kjellson’s raspy growl. The distortion then gets kicked up a notch as the band se 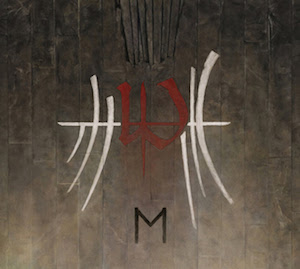 ttles into a propulsive groove driven by the dual guitars of Ivar Bjørnson and Arve Isdal. This part of the song recalls old Opeth in its use of off-kilter rhythms and soaring guitar leads.

To use a word such as epic would be a gross understatement to describe the rest of the song and the rest of the album, as E is one of those records that takes risks and pushes the envelope as to what the band can do sonically. The next five tracks combine many of these same elements, layering fast and crushing metallic passages with progressive rock explorations.

No song seems to follow any basic song structure, instead combining drastically different movements. The production is crisp and clear, with every instrument standing out in the mix and adding a different musical texture to each song. As usual, the guitar playing of Isdal and Bjørnson dominates the record, with plenty of adventurous and textured riffs that are harmonically complex.

The second half of E sees Enslaved toning down the blistering metal to explore more textured and dynamic sounds. “Feathers of Eolh” is a prime example of this as it moves from pulsing metal into a downbeat breakdown complete with clean vocals and sold performance from guest flutist Daniel Mage. This continues on the final track “Hiindsiight” which mixes brooding metal with more upbeat jazz-inflected passages. The song features a sizzling performance from jazz saxophonist Kjetil Møster who lets loose, bringing an exciting sonic dimension to the song.

This type of musical experimentation is undoubtedly impressive for a band with such a storied career as Enslaved and is one of the main reasons why E is so enjoyable to listen to. Rather than just continue what they’ve done in the past, Enslaved have added a bunch of new musical directions, taking some risks to push the edges of their sound. Thus, E is another high-water mark for the band and is one of the best metal releases of 2017.