Operating as both an installation in sound… and a singular patchwork of eccentric groove, Dust, by Berlin-based producer Laurel Halo, is an eleven-song fever dream transmission that refuses to be pigeonholed. This release seems more concerned with the abilities of the voice, many of them in fact, and their capacity to frame stories as the device to deliver music. The lead song, “Sun to Solar,” is an adaptation of “Servidão de Passagem” by Brazilian concrete poet Haroldo de Campos. Along with the ensuing “Jelly,” these are casual yet VERY legit broken beat tracks at the core. Both are purposely cut up 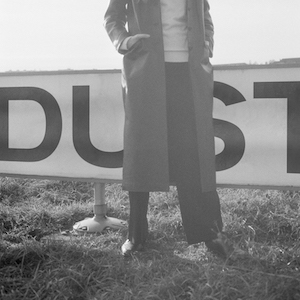 and into with different voicing and add-on passages from what can be assumed are conversations with friends.

Halo fills these “chatterings” with her roster of ace underground artists that include Klein, Lafawndah, and Michael Salu, as well as musicians such as Eli Keszler, Craig Clouse ($hit and $hine), Julia Holter, Max D, Michael Beharie, and Diamond Terrifier.

The voices triangulate around Halo’s jittery audio-verse. Less confident or inexperienced producers would overexpose this sound design by riding it non-stop.  But Halo wants you to think. Be moved. Deviate from the expected algorithm.  So she scratches, etches, draws, scribbles and then erases with voices, vinyl record manipulation, organ snippets, and unorthodox snare kicks and song breaks. Procuring a layer of sound that operates similarly to an outer space conveyance…This finely woven cacophony of aural textures and oblique frequencies are constantly renegotiating all the abilities that sound can offer. Get comfortable with the difference to embrace all the possibilities.

From the Tom Waits experimental mood and weirdness of “Koinos” to the organ-saturated kvetching in the instrumental stopover in “Buh Bye,” the no cheat-code sound production credo stands firm.

Only those who take umbrage in the safe will find fault in Dust.

Watch the video for “Jelly” by Laurel Halo: