It’s the self-deprecating, self-aware mockery of his behavior and his generation at large that allows Thundercat, the bass playing virtuoso with a sometime potty mind and snarky humor, the latitude to be creatively weird and so much more compelling as an artist. Who is constantly pushing the middle of contemporary music… all the way left. He is one of the most sought after musicians, composers, and songwriters of his generation. Just revisit Kendrick Lamar’s “To Pimp A Butterfly” and “Untitled Unmastered,” if you need to ask why.

In an alternative universe, Stephen Bruner aka Thundercat could have mapped out a pretty linear and successful career as this incredible jazz bass player, in the vein of Stanley Clarke or Jaco Pastorious. But that is not who Thundercat is.

Instead, when he would back up Erykah Badu or Suicidal Tendencies, Thundie would perform donning a football helmet and pads.

So with the release of Drunk, his third studio album to date, we are treated to a musical display of 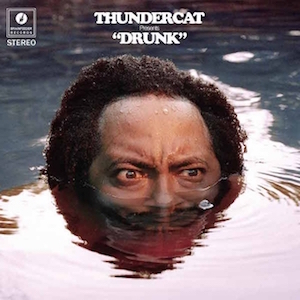 unrestrained delight. From serious jazz-fusion moments to retro-futuristic pop manifestations.  Space boogie thump and yacht rock AOR to boot.  For anybody else, this “grouping” would be a bad look. But Thundercat, who understands that genius talent is best absorbed when cracking jokes at the genius, pulls off this multi-directional sonic bouillabaisse… while inferring how sobriety is a good look.

In anyone else’s hands, the narrative behind Drunk might be delivered in some heavy handed, finger pointing, ABC after school special type way. But Thundercat just presents issues and then…. farts on them. And somehow that gets the point across

“Uh Uh,” “Blackkk” and “A Fan’s Mail(Tron Song Suite II)” and “Day & Night” keep a flag firmly planted in the jazz-fusion realm, with the ghost of George Duke hovering just above. “Bus In These Streets” uses a lush Brian Wilson/Beach Boys soundscape to discuss the vain and vapid nature of a generation addicted to the many uses and distractions of their cell phone.

“Show You The Way,” a throwback blue eye soul ballad, features contributions from Kenny Loggins and Michael McDonald. It’s that jam that comes on when you are reloading your nachos and Slurpee at the local Mini-mart. As you close your eyes to sing the sugar sweet hook, your Slurpee runneth over.

“Friendzone,” the front loaded lyrical joke factory, describes the feeling of not being “felt” by the woman of your desires. Besides the snarky quips, there’s “the next time you call me I’m going to stare at the screen, waiting for the call to end.” The track carries that space bump intensity, similar to “Do The Astral Plane” by Flying Lotus.