With a focus on self-conscious lyrics and plenty of powerful backing music, the band has reached a career high point. Armed with a clean production that gives each instrument room to breathe, Real Friends sketch out an impressive set of pop-punk-emo songs that stand on their own.

Singer Dan Lambton has taken his vocals to another level on this record, combining a direct and emotive delivery to go with some impressive vocal acrobatics. Backing him, the tag-team of Dave Knox and Eric Haines deliver plenty of catchy and hook-filled guitar lines. Channeling old school pop-punk and emo sounds, Knox and Haines provide just the right amount of crunch along with some catchy leads. Kyle Fasel and Brian Blake keep the rhythms limber and snappy, with Fasel’s crunchy basslines driving the harmonic progressions in each song.

The tight ten-song album goes by fast, yet the brevity in material actually works in the band as it distills their 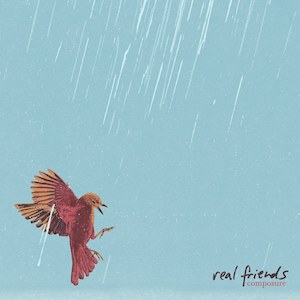 vision and sound into a compact blast of emotion. Beginning with the rocking “Me First,” the record keeps up an intense and introspective series of songs. One of the singles from Composure, “From the Outside,” perfects this approach. Sandwiched between plenty of tasty guitar licks, Lambton soars with some incredibly personal and heartfelt lyrics such as “Redefine rock bottom with these empty orange bottles / Never felt so paralyzed before  We’re all looking for some answers with the hangman’s broken lantern / Growing ever closer to the floor.” The deep lyrical content, matched with the high-powered melody lines makes for a totally captivating listen throughout the record’s runtime.

The album starts out strong but then picks up steam towards the second half, especially the final four songs. The centerpiece of this backend is in the title track, a winding piece of emotional hardcore and pop-punk that rides a stellar drum groove and some tasty lead guitar lines. Once again, the lyrics provide plenty of emotional punch with lines such as “The walls were built so high but couldn’t keep their words out / The shelter they provide only houses self-doubt.”

In this day and age Real Friends have staked out their claim as one of the must-hear bands in the punk underground, and Composure is proof that this type of music still has a lot to say. With a clean production, catchy songs, and poetic lyrics, Real Friends have turned out one of the best releases of the year, a vital collection for anyone who likes their rock upfront and confrontational.

Listen to “From the Outside” by Real Friends: