An Angel Fell, the cosmic jazz odyssey from veteran San Francisco-based outfit Idris Ackamoor & The Pyramids, is a timely call to action, giving context and maintaining synchronicity with the jazz renaissance happening now. It deserves to ride on any playlist of upstart jazz phenoms of today. Punch it in someplace between Nubya Garcia and Kamasi Washington. An actual student of legendary pianist Cecil Taylor, and a spiritual disciple of sorts of Sun Ra, Ackamoor brings dub, prog, and global soul to the jazz table. Similar to Ryan Porter drawing on his hip-hop upbringing with this years’ The Optimist, or Joe Armon-Jones employing samplers and using “broken beat” and other electronic music variations as a canvas to paint his keyboard strokes over for his début album Starting Today. Uniqueness and truth makes jazz adjust to the times. An Angel Fell reminds us of that. Jazz has always reflected and influenced the culture of now. Or as Miles Davis stated during his fusion phase “you gotta play where the ears are at.” 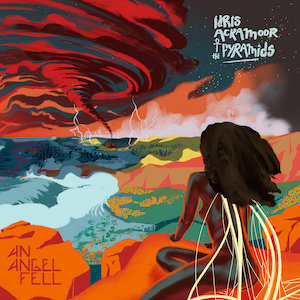 Produced by Malcolm Catto of The Heliocentrics – a perfect fit – it’s inspiring to hear Ackamoor choose to be of the moment, and not a stodgy holdout of the “back in the day” jazz-elitist mind.

Meanwhile, the standout travelling blues of “Soliloquy For Michael Brown,” with Ackamoor’s ornery, ferocious, and eventually compassionate tenor sax voicing, amidst the afro-jazz patina raising up the spirits, acknowledge the loss of life and grave injustice of Ferguson.  Couple that moment with the Lewis Heriz cover art image of a fallen Nubian Angel watching a tornado run roughshod across the earth and you have a record made for our times.

Listen to “Soliloquy For Michael Brown” by Idris Ackamoor & the Pyramids: