Despite its name, #1 Hit Single, is the debut full-length album by Brooklyn jangle-punk band Cende, despite its 22 minute length. It’s 22 minutes of power with a sound that ranges from joyful pop-punk to heavy droning. The lyrics throughout the album echo similar themes of angst, confusion, heartache. 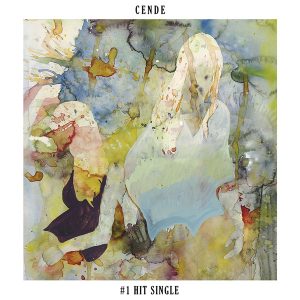 The layers of sound are complex throughout the album- the track “What I Want” for example, sounds different than the two songs before it. The tune manages to be grandoise and sad, one of two tracks where the guitars and drums seem to reflect the subject matter of the songs themselves. Cameron Wisch (Porches) croons over the soft drone of the drums. Greta Kline (Frankie Cosmos) makes a small cameo, which snaps the listener out of the trance that develops during the first minute of the song. “I’m invisible / As if you care at all”- Kline and Wisch perform beautifully in tandem. It’s the highlight of the album.

After “What I Want”, the band launches headfirst into what sounds like a mistakenly recorded jam session. The only knock on this little instrumental is that it’s short. The peppy track”Good Crime” is sandwiched between the two brooding anthems on the album. “Moment Too Late” shocks the listener from the moment it starts. There’s a split second where the listener will double-check if they’re still listening to #1 Hit Single.

“Void” is where Kline’s voice really soars. In the first few tracks, his singing feels slightly monotone, with quick flashes of his vocal range dispersed throughout. In “Void”, he lets loose for an entire track. “Get a new tattoo / fill in the void / nothing new” he trills throughout. The guitars and drums take a backseat for most of the track, it’s splendid to hear Kline front and center.

It becomes lucid that this is what Cende is aiming for. Hypnotize the listener, then snap them right out of it. It’s this trait that makes the album a blast to listen to. Far too often the indie pop/punk scene has the same recycled structure applied to every topic from here to the sun. Cende takes a different approach, and it’s refreshing. It’s a shame that the album is only 22 minutes long. Cende have crafted a new form of power pop that isn’t formulaic, and their debut shines because of it.

Listen to “Bed” by Cende:

Tyrone Chouhan hails from the sun-soaked desert of Santa Clarita, California. Growing up, his gateway to music happened to be the soundtrack to Tony Hawk's Pro Skater 4. Days and days of playtime and the combination of hip-hop, metal, and punk music that played throughout the game eventually opened his eyes to every type of music imaginable. He spent an endless amount of time rifling through music of all sorts as a kid- grindcore, jazz-infused hip-hop, alternative country. If there was a hyphen in the genre title, there's a good chance that he's heard the essentials. After dabbling in a computer science major for a bit at San Francisco State, he eventually graduated with a B.A. in Humanities, and now spends his days working in San Francisco's tech scene. You'll likely spot him across the bridge in Berkeley, either playing basketball at San Pablo Park or having a beer at Fieldwork.