Many of these selections feature hypnotic rhythm tracks played by Scott’s Electronium – an invention which composed and performed rhythm patterns using programmed intelligence. These experimentations precede 1977’s “I Feel Love” by Giorgio Moroder /Donna Summer and 1974’s “Autobahn” by Kraftwerk. Scattered about this massive compilation, 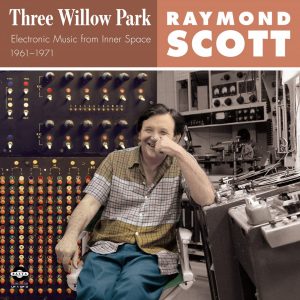 it’s easy to hear the origins of early electronic dance music that started to flourish from Detroit in the early 1980s. As stated in the compilation’s liner notes,”That Scott produced beat-oriented proto-techno before the 1970s explosion of electronic music and rhythms on the pop charts is a significant achievement that should not be overlooked.”

Willow Park Center was an industrial rental complex of offices and warehouses in a Long Island suburb where Scott set up shop in 1965. He operated a musical lab – researching, experimenting, testing. He twirled knobs, flipped switches, and took notes. He installed equipment and machines, and used them to build new equipment and machines. This makeshift compound remained Scott’s workspace and bedroom until 1971, when he decamped for L.A. to work for Berry Gordy at Motown.

It has been documented by Guy Costa, Head of Operations and Chief Engineer at Motown from 1969 to 1987, that Scott’s tenure at Motown was ineffective.

“He started originally working [on the Electronium]out of Berry’s house. They set up a room over the garages, and he worked there putting stuff together so Berry could get involved and see the progress. At one point Scott worked out of a studio. The unit never really got finalized—Ray had a real problem letting go. It was always being developed. That was a problem for Berry. He wanted instant gratification. Eventually his interest started to wane after a period of probably two or three years. Finally Ray took the thing down to his house and kept working on it. Berry kind of lost interest. He was off doing Diana Ross movies.”

Three Willow Park is produced by Gert-Jan Blom and Irwin Chusid and will be released on vinyl, CD and digital formats on June 30th by Basta Music