The CIA website describes Uzbekistan as a place where:

the shrinkage of the Aral Sea has resulted in growing concentrations of chemical pesticides and natural salts. These substances are then blown from the increasingly exposed lake bed and contribute to desertification and respiratory health problems; water pollution from industrial wastes and the heavy use of fertilizers and pesticides is the cause of many human health disorders; there is increasing soil salination and soil contamination from buried nuclear processing and agricultural chemicals, including DDT.

Sounds ideal for a doom metal band, a place where the music can resonate with the environment, for introspective sound that encompasses the harsh realities, and for creativity driven by the isolation and lack of interest from the rest of the world.

Montfaucon rises to all the challenges of their home country and produces unique metal, piano-driven doom/death metal. The band is a duo, Valentin Mayamsin and Michel Cadenzar. Mayamsim lives in the Bay Area and primarily plays keyboards while Cadenzar still resides in Uzbekistan and takes on vocals, guitar and bass. The band uses a lot of sampling in their music.

Montfaucon just released a six-track album, Renaissance, produced by Dan Swanö (Edge of Sanity, Nightingale, Witherscape). The music is complex, with echoes of prog in addition to the metal, with the piano taking on melodies while the voice growls. SF Sonic had the opportunity to interview Valentin Mayamsim about the band’s music and history.

SF Sonic: For most Americans, Uzbekistan is unknown. What’s the music scene there like? 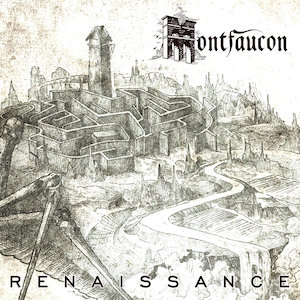 Valentin Mayamsin: It’s a pretty small and isolated scene. There are few bands playing diverse music from soft rock to death metal, mostly playing covers, a few have their own original stuff. There are a few clubs and a few dedicated people who promote rock and metal by arranging gigs and small fests. There are many people who come to listen to music, so concerts are usually packed. We were lucky to perform live at big festivals and play for a few thousand people, but after a few such festivals they’ve been banned by local government. Foreign bands don’t usually come to Uzbekistan.

SF Sonic: How does your central Asian background influence your music?

Mayamsin: There was no intention to put anything Eastern into the music, but I guess it happened unintentionally a few times, mostly in piano parts. And we actually have a warm-up instrumental composition with a heavy Eastern sound which might appear on our next album.

SF Sonic: The music you play feels weighty and dark in a historic sense. Where do your non-musical influences come from?

Mayamsin: For our band name, for ‘Prisoner’ and ‘The Last Night’ tracks I drew inspiration from ‘The Hunchback of Notre-Dame’ by Victor Hugo. The story is so dark and beautiful at the same time, just like our songs. ‘I Was a Warrior’ was inspired by Sumerian myths. I was trying to find inspiration from different sources and explore different styles and themes.

SF Sonic: Living 7000 miles apart must create some challenges. How do you put together your music?

Mayamsin: This is mostly challenging for the creative process. We used to sit next to each other, Michel on piano and me on guitar and composed music piece by piece. It was interactive process and very productive. Now it’s different. It is not only 7000 miles, it’s also 12 hours difference. It’s just impossible to synchronize and work together. Now Michel records his piano parts and sends them over Internet so I could work on guitar parts. Speaking of recording, it was not very hard. Just like in a studio, we recorded every instrument track by track at home at our own pace and exchanged files over the internet with Google Drive.

SF Sonic: Your sound is untraditional for death/doom metal, with the piano so prominent and the music having a progressive twist. How did you arrive at this sound?

Mayamsin: We gave our material to Dan Swanö and asked him to create the sound. Since he also worked remotely with us, we could just ask him to make it sound like some other band, but in our case we couldn’t find any similar band or even track to the sound we were aiming for. Dan produced a few variations of a sample song and we guided him to achieve this sound. He is very experienced and professional, working with him was real pleasure.

SF Sonic: What influences did you bring to your music?

Mayamsin: I don’t know where does Michel draw his inspiration from, it’s a mystery to me. I have very wide range of music influences. Satyricon, Opeth, Lux Occulta, My Dying Bride, Cradle of Filth, Andromeda, Cannibal Corpse, Sadist, even some underground bands like ‘Dominium’, ‘Psypheria’, ‘Archetype’, ‘maudlin of the Well’ and many other bands in different styles.

SF Sonic: Are you going to tour together in support of the new EP?

Mayamsin: No plans yet. But that would be fun.
Check out Montfaucon on their Facebook page .

Buy Renaissance by Montfaucon on Bandcamp.

Listen to “Insanity” by Montfaucon :