“Future is Now” is a memorable and rousing single from the forthcoming album Tiny Mirrors, a sophomore release from the San Francisco based band, The New Up. Amidst a hazy yet uplifting shoegazer type soundscape that includes expansive vocals and anthemic melodies, the lyrics hint at the cautionary parameters that come with attaining a perceived want or goal. So while the sound of the song comes off as a lush auditory hug, the lyrics work in juxtaposition giving the listener a stoic pat on the back and off you go.

The song, which has been featured on Aaron Axelson’s Soundcheck on Live 105, is just a sample of the many colors and directions in the modern/electronic rock vein that The New UP excels at. For Tiny Mirrors, band members ES Pitcher, Noah Reid, Hawk West, Nick Massaro, and Art McConnell chose to work with DJ and producer Jack Danger. SF Sonic recently had a chance to chat with the band.

SF Sonic: So how did The New Up form?

The New Up: The band formed slowly over a number of years rather than in one spontaneous moment. It started off between ES Pitcher and Noah working together acoustically, meeting serendipitously in the 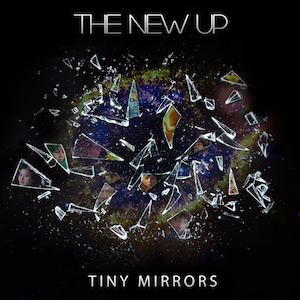 parking lot of a music festival in Indiana (at the time Reid lived in Charlottesville, VA and Pitcher lived in Chicago) and then hooking up musically after Reid moved to Chicago a few months later. After a short time honing their songwriting together they met Hawk West, who brought a whole new element to what the sound could be. After a move from Chicago to SF and an iteration or two with different drummers and bassists, who were adding their own flavor to the sound and really changing it to something different than what Pitcher, Reid, and West had originally envisioned, the three founding members decided to take the sound into their own hands and pursue a more pure creative vision. The culmination of that refining of the process really hits its stride on the new album, Tiny Mirrors.

SF Sonic: Who or what artists would you name as inspirations to the sound of the band?

SF Sonic: Was Tiny Mirrors recorded in the SF/Bay area? If so what studio?

The New Up: Tiny Mirrors was actually recorded in five different studios, four of which were in SF. Three out of those four studios were actually home studios. The only official studio that was used was Coast Recorders, which technically no longer exists. The other three included two of our home studios (we moved in the middle of the recording process), named “Pleasure Pad Studios” and “Uptown Studios,” and our mixing engineer’s studio, which he calls “All Kinds of Noise.” The real gem, though, was where we recorded the drums and bass, and some of the guitar and vocals. It was essentially a beautiful, amazing sounding barn on the Mendocino Coast that we converted into a state-of-the-art studio for six days. That place was nothing short of magical, but each place had its own charm and added its own distinct and gritty flavor to the album.

SF Sonic: So the band kinda covers all aspects of indie/alternative rock… from the upbeat punch of The Vapors..the synth vs guitars pull of Spill It out.. to the shoegazer feel of “Future is Now.”

Was it intentional to try and touch on all these different colors?

The New Up: Yes and no. We didn’t really set out to do that from the beginning of the process, but as we started to illuminate the songs that were gonna be on the album, we realized that we had a very diverse set of sounds that we were going to be tying together, and that this was an opportunity to highlight the different types of music that we’ve all grown up loving. As we got deeper into the process we started to understand the way the songs represented different emotional aspects of ourselves and it turned out that a perfect subset of the emotion that we wanted to convey was represented in the feel of all of the songs that made up the album.

SF Sonic: OK. what’s your favorite restaurant spot in the Bay Area…..your go to and why?

The New Up:That’s a tough one as there are so many amazing restaurants in the Bay Area, but we’d have to go with Burma Superstar…for the samosa soup and the tea leaf salad, of course!

SF Sonic: Was there a specific reason why you worked with Jack Frost on this project? Something you heard someplace else?

The New Up: We’ve known him for some time and he’s an amazing DJ, in fact the best DJ we’ve ever personally known. He has an amazing ear and if you go to his SoundCloud account, he has countless remixes he’s done wherehe absolutely kills it (and judging by his plays and followers we’re not the only ones who feel that way). We really admired his musical tastes and thought he would be a great creative person to add a classy touch with some pop sensibility to the album. Judging by how the album turned out, we made the right choice and he was a crucial addition to the production process.

For more information on The New Up, check out their website.

Listen to “Future is Now” by The New Up: