Stu Brooks is the bassist and musical director for Matisyahu. Far before joining Matisyahu, he established himself as a member of The Dub Trio. He has been playing with drummer Joe Tomino and guitarist DP Holmes in the legendary Trio since it’s inception in 2000. He has also worked as a producer, performer, and musical director for many other artists. The list of artists he has worked with is quite long and includes Dr. John, Meshell Ndegeocello, 50 Cent, Pretty Lights, and GRiZ.

Recently, SF Sonic was able to sit down with Brooks prior to a Matisyahu performance at the Dry Diggings Music Festival. He and Tomino had just flown in from Denver, where they had performed with GRiZ at Red Rocks, bringing the DJ and electronic producer’s music into a live band format for the first time.

SF Sonic: Tell me what you did last night.

Stu Brooks: Last night we were in Denver. We played Red Rocks with Griz. It was his first live band performance. Full band. 14-piece band.

About two and a half months ago, I met him for the first time. He wanted me to be the musical director. We quickly put a band together. We put our brains together and came up with a concept and figured out how to take his music into a live setting. And it was all analog. No tracks. No stems.

SF Sonic: Was that up to you? Or were you working together with the others?

Brooks: There was definitely a collaboration, but I was definitely the point man. Grant (GRiZ) is an artist who is very particular. He knows what he wants. But at the same time he is very open, which is amazing because he put all his trust in my judgement.

So we put together this 14-piece band and each individual had input. They are all so talented and experts in the field.

SF Sonic: I recognized drummer Nikki Glaspie (Dumpstaphunk, The Nth Power) in a photo I saw from the show. Who else would I know in this group?

Brooks: Yes. Nikki Glaspie. There was the Dap Kings horns. Jimmy on bari and tenor and Smooda who plays trombone – he plays with TV on the Radio and others. And Chris Davis, who is the trumpet player for the Dap Kings horns. And Alicia Shakur on vocals who is so badass. And a girl named Angelica, or Jelly, on vocals.

GRiZ was on sax also so that made a four-piece horn section and his boy Dan “Muzzy Bear” on guitar and vocals and this guy Dale from Soul Scratch, an amazing singer.

SF Sonic: When you started this collaboration, were you in the midst of touring with Matisyahu?

Brooks: We had just gotten back from a Dub Trio tour. We did a reunion in June. And then I met him (GRiZ) just before the Matisyahu summer tour with UB40. That’s when I met Grant/GRiz. That’s when we started putting our heads together.

On every day off I had in July with Matis, I’d fly out on those days off and meet Grant in Denver. So I was kind of busy. (laughs.)

SF Sonic: You seem like you’ve always got something going on. How do you keep life and marriage and everything balanced throughout all of this? 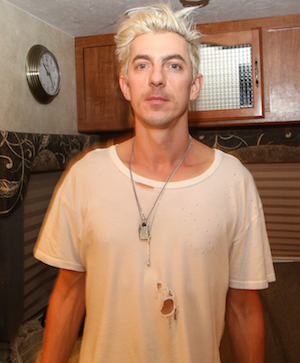 Brooks: Well, a lot of support from Janice (his wife). I am getting better at managing my time without stress I think. I used to stress on everything but I’m sorta bringing it down. I’m just taking it a moment at a time you know? But ya, there are a lot of projects going on at once. I just try to sleep and eat right and stay healthy. I do a lot of yoga.

SF Sonic: Do you do yoga with Joe (Matisyahu/Dub Trio drummer and well known yogi)?

Brooks: Ya Joe has a new yoga pal on the road. But at home in New York, there’s a spot on my block and I love it.

SF Sonic: What kind of yoga?

Brooks: Regular vinyasa. Sometimes I’ll go to modo or hot yoga. There’s a place in LA I love called Tantris, which is an amazing hot yoga place. Infrared. It’s Russell Simmons’ place. He’s a yogi. He guided one of our meditations. It was so amazing. I loved that experience.

SF Sonic: Between all of the different groups and Dub Trio, does Dub have new material coming out?

Brooks: We have a new record in the works. It’s going slowly. We’re all in different cities with different projects so it’s taking a while. But we have our eye on spring for a release. There’s one song we have already with Mastodon. And another with Meshell Ndegeocello as featured vocalist.

SF Sonic: Who from Mastodon?

Brooks: Ya, you know a broad spectrum. We’re gonna try to fill in the blanks.

SF Sonic: With Dub Trio there don’t seem to be any rules?

Brooks: With Dub Trio there’s no rules. Never was really.

SF Sonic: At one point, you guys collaborated with Mike Patton?

Brooks: We (Dub Trio) were his rhythm section. 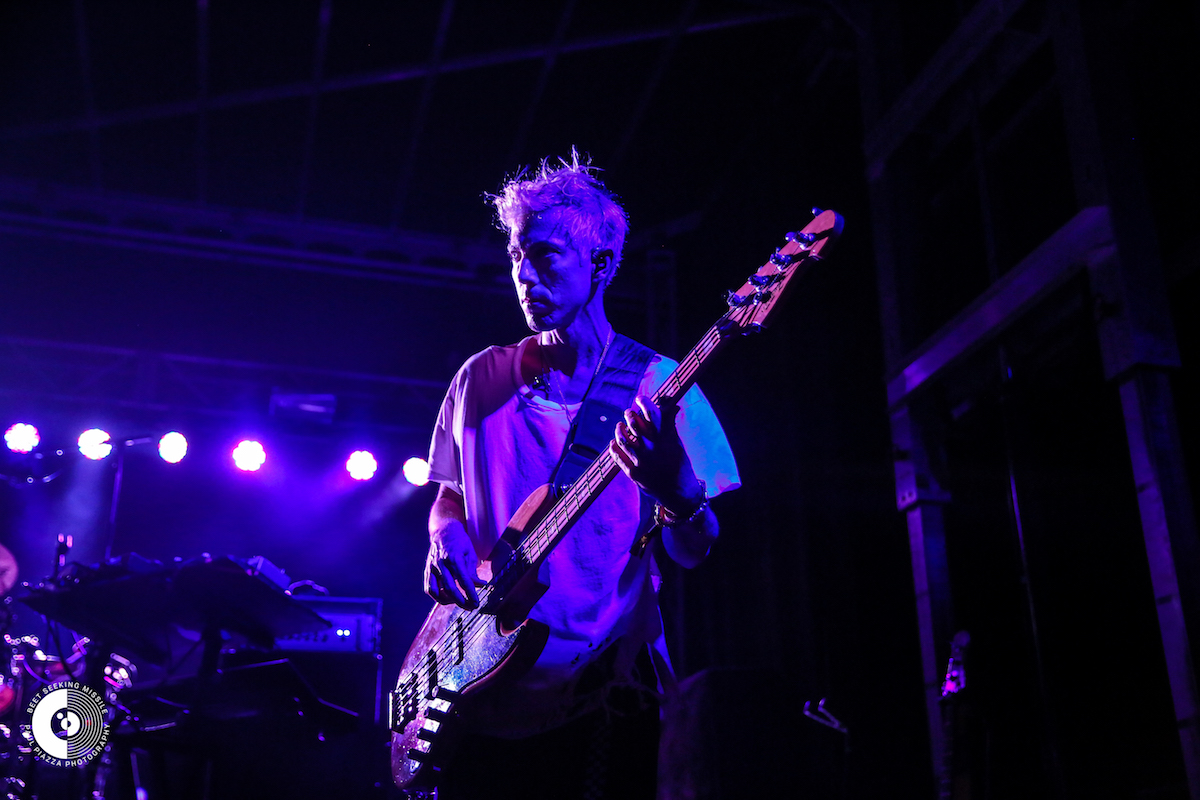 SF Sonic: Have you done anything with him since?

Brooks: He appeared on “Not alone” on New Heavy, our second record in 2006. And right after that, we joined Peeping Tom and did like two years of that. Almost two years touring.

And then he sang on “Another Sound is Dying” and then “No Flag.” Since then no actual collaborations.

Brooks: Ya, he’s so prolific.

SF Sonic: We just had him in Sacramento with Dead Cross.

Brooks: Oh that’s cool! I heard he was in an accident.

SF Sonic: I think it was a skateboarding accident but he looked pretty good and was moving around all right.

SF Sonic: We’re halfway through 2017, so tell me what’s coming up and beyond.

Brooks: We’re doing a Europe tour then we’re hitting Moscow and the Philippines. Right after, we join up with Common Kings to do a lengthy U.S. tour.

SF Sonic: Is there any apprehension heading into the Philippines considering what is going on there? Or just curiosity?

Brooks: Curiosity. I’ve never been there and I married a Filipina so there’s a little personal connection there.

SF Sonic: Any family members of hers there?

Brooks: No she was born in the U.S. and all of her family members are here. But ya, the politics there seem a little crazy, a little dangerous. I kind of like that.

SF Sonic: Well, looking at Dub’s touring schedule in the past, you guys seem to like going places that are volatile.

Brooks: Ya, same with Matis. We went and played Crimea when Russia was annexing Crimea two years ago. Right after. I guess the same rebels knocked down an Air Malaysia flight. True?

It was right after that. It was a little nerve wracking. I loved it though. They diverted our flight. We went around it. I don’t know, I found that very interesting. I mean, I don’t like the fact there there are death squads for drug dealers and drug users in the Philippines. That makes me kind of nervous. I have nothing to worry about on my end, but you never know.

I’d like to check out the food. Hopefully I can eat there because I don’t eat meat. So I’m not really sure what to expect.

SF Sonic: So is that a new thing for you?

Brooks: Well, I’ve been a pescatarian for two years.

SF Sonic: I was gonna say, the last time I ran into you in Sacramento, you were eating a burger. But that was a few years back huh?

SF Sonic: At a reggae festival is it a different connection for you and the band? Do you change the setlist?

Brooks: You know, for the last couple years or so we haven’t been playing a setlist but we actually made a setlist tonight.

SF Sonic: So without a setlist, how do you guys operate?

Brooks: A lot of times, it’s Matis pulling audibles. We’ll start with a lot of songs planned out off the top and anybody’s welcome to suggest and we usually have a quick conference on the stage between songs. It’s just open so anybody can take the initiative. There’s just total freedom.

SF Sonic: When you say dub heavy, how would you characterize that?

Brooks: Well, our own brand of dub I suppose. We got Joe from Dub Trio and myself. We don’t really sound like traditional reggae at all. But it’s usually stripped back. Heavy bass and a lot of delays and reverbs flying around. I don’t know. We have our own brand or style I’d say.

Brooks: No boundaries. It’s always a new exploration. Matis want us to explore every night to try and push ourselves into new territories.

SF Sonic: So a song may sound different from one night to the next?

Brooks: Matis wanted to capture that on Undercurrent (the band’s new release), kind of focus on the band and do some fresh stuff. We spent six weeks just improvising in a room and right to the last minute before going into the studio we really didn’t have 100% of a plan. And then last minute, before going into the live room, we would write out a map and go for it.

SF Sonic: And he would put his words over it?

Brooks: He did afterwards and he killed it.

Brooks: No. It’s him. That’s his voice. I can help out with song titles. I do that sometimes.

SF Sonic: Ok, so last question because I know you’ve gotta hit the stage shortly. Going forward after the Philippines and beyond that, what do you have going on? Any new collaborations you can talk about?

Brooks: We have a new track in the works for the fall with Common Kings. I’m excited about that.

The Dub Trio record will be a focus soon and there’s gonna be some more GRiZ stuff for me coming up in December. I did some recording for his new work. A new record or single. I’m not totally sure. There’s a song with Father Dude and it’s amazing. Then there’s some shows over New Year’s and then GRiZmas which is near Detroit.