It would be easy to dismiss someone playing a shovel as a novelty. While it may be true with some shovel players, it’s not the case with Shovelman. Once the surprise of seeing the unusual instrument wears off and the listening begins, the depth of feeling in the music becomes obvious. Shovelman, with his shovel, slide, and pedals, is a musician.

When playing and singing songs, Shovelman sounds like he walked out of the R. L. Burnside Fat Possum era. Or maybe he spent a few months locked up with Little Axe. It’s primitive, basic, country blues that took a modern turn along the road. And then when he’s playing extended monologues on his shovel, accompanied by loops of percussion created by hitting the shovel, maybe standing in the corner at the Edwardian Ball or accompanying a high wire act, the music sounds cinematic. Maybe it’s the soundtrack for a Robert Rodriguez movie in the lonely scenes.

Because the music can’t really be pigeonholed, it just sounds, well, Shovelesque. In order to demystify the music and the man, SF Sonic interviewed him shortly after his appearance at the 2017 Edwardian Ball.

SF Sonic: We will get to the shovel guitar, but first tell us how you got started with music. Did you grow up playing guitar? What were your early influences?

Shovelman: I grew up in a rural part of northern California and the house I lived in as a kid didn’t have electricity. I started playing acoustic guitar, but eventually convinced my parents to get electricity so I could play electric guitar. I wanted to play louder. I played in a bunch of punk rock bands in middle school and learned how to play bass, drums, and even accordion. I’ve always liked music that I could feel in my bones. Something so deeply from the past that it could be from the future. Something I didn’t know where or when it came from. And that’s the music I want to make, music that was outside of time.

SF Sonic: What inspired the idea to use the shovel and when did you first start? 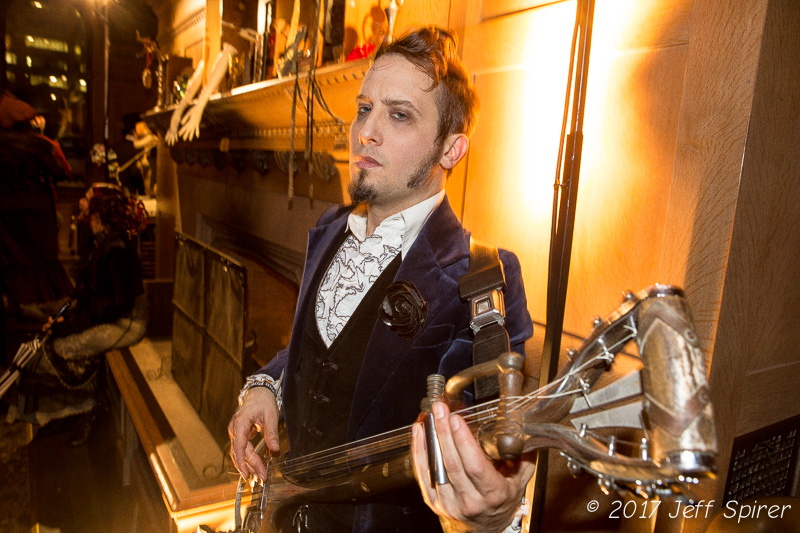 Shovelman: Well all the details are a bit hazy in my recollection but one night I felt completely possessed, I headed out to the barn, out back of my old farmhouse. I grabbed my welding torch and my rubber boots, a pair of goggles. I just started slamming things together, feverishly and sweating a lot. I accidently started a small fire and had to put it out. The neighbors called to complain. You know, the ones who were always calling to complain. The dogs in the neighborhood all began howling. Eventually I started making some real low frequency noises. When I woke up the next day, there was my barn shovel. It had gotten together with a meat-grinder for a bridge, was wearing some strings and guitar pickups. It looked all right. That’s the way I like to think about it. The shovel guitar was different then other guitars. It didn’t have a fretboard, I had to use a slide. So I had to relearn how to play the guitar. Sometimes when you have to relearn something you get back into that pure creative space where there is no road map.

SF Sonic: Are there unique sonic characteristics that appeal to you about the shovel guitar?

Shovelman: The shovel is like a drum set, slide bass and guitar all in one. Basically, it’s the Swiss Army knife of musical instruments. I can get all kinds of noises from the shovel, and I’m still discovering new ones all the time. I can also dig a hole with it if need be, we musician types always need day jobs.

SF Sonic: You work with a lot of effects. What can you tell us about your pedal board?

Shovelman: I’m a real pawnshop weasel. I love finding effect pedals no serious musician would ever use. Stuff I find in old junk shops. I have one that makes 40 different sounds that cost me five bucks, so that’s about 13¢ per sound. I have one that turns the guitar into a bass. My looping pedal allows me to create musical sketches. I try to get the sound of a full band with all the shovel noises. When I started out it was during the recession and I needed to fire the band and replace them with a box that I could step on every once and while.

SF Sonic: How did you get interested in blues? 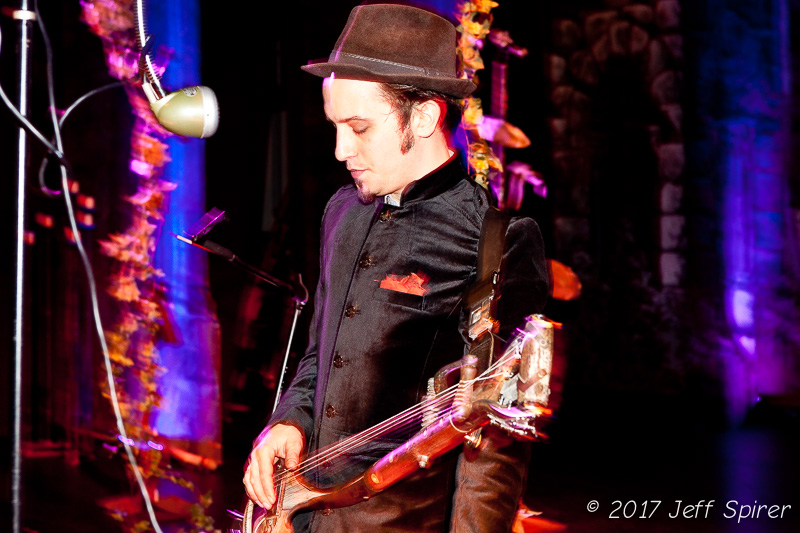 Shovelman: I grew up in a rural place, and my father was a folk musician and he’d have his friends come over and play banjo, guitar and harmonica. One guy had a washtub bass. So, as a kid I was always around that music. But then when I got into Jimmy Hendrix and Cream I wanted to know “Where does this come from?” And I discovered Sun House and Mississippi John Hurth and Robert Johnson. What intrigued me was the way one person with a guitar can sound like multiple people playing at the same time, and I thought, I want to do that.

SF Sonic: Do you think of yourself as a blues musician?

Shovelman: No. I don’t, but other people think that’s what I am. I think of myself as a collage guitarist. I want to be able to play as many styles of music that I can from different eras—a hodge-podge of all styles of guitar from the last century. But I think it would be cool to try and take blues music into the twenty-first century. It’s hard because blues has been reinvented, tweaked and reinterpreted so many times. But I still think there’s room to explore.

SF Sonic: SF Sonic first saw you at the Edwardian Ball and you’ve played at the Ball on more than one occasion. What makes The Ball special for you?

Shovelman: My first Edwardian Ball was one of the early gigs I had in San Francisco. I was a small town kid in the big city. I was playing music in the hallway and this black guy wearing a tuxedo comes up to me with his tenor sax and asked if he could sit in. Pretty sure that I recognized him, I tried to keep it together. After we finished playing a set, he turned to me and said, “That last song, that was funky man.” I still remember him saying it, just like that. It turned out it was Angelo Moore from the band Fishbone, Mr. Funky Stylee himself! Now, when Fishbone’s Angelo Moore dubs you funky, you can just quit playing music then and there and die happy. I’ve played The Ball every year since and there’s always some kind of new adventure to be had. The Edwardian Ball is a Petri dish for the absurd and a playground for lost time travelers of every persuasion.